Errol Spence Jr. vs. Shawn Porter close to being finalized 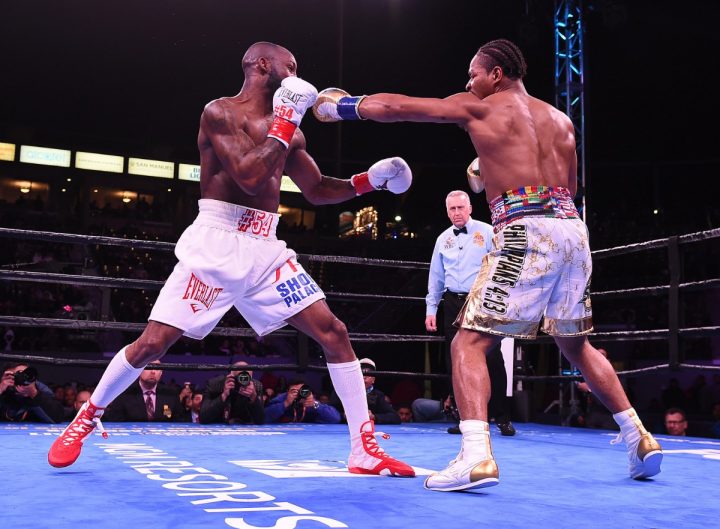 By Kenneth Friedman: IBF welterweight champion Errol Spence Jr. (25-0, 21 KOs) and WBC champion Shawn Porter (30-2-1, 17 KOs) are close to having their unification fight finalized for the summer for a NON-pay-per-view unification fight that will likely take place at the Barclays Center in Brooklyn, New York, according to Mike Coppinger.

This is the first really tough fight for Spence in which he’s going to need to show the boxing world whether he’s for real or not. Porter has a roughhouse style of fighting that could give Spence problems. Spence was heavily criticized by boxing fans for failing to knockout or even hurt lightweight Mikey Garcia in their fight on March 16. For Spence, a fighter considered by some to be the best overall talent in the 147 lb division today, to fail at destroying a guy so much smaller than him in Mikey, it causes a lot of doubts about him now. Porter, 31, has a good ring IQ to go along with his power and pressure tactics.

“SOURCES: The welterweight unification match-up between Errol Spence Jr. and Shawn Porter isn’t finalized yet but it’s getting close. The fight could land at Barclays Center in Brooklyn, New York, this summer. Told it’s unlikely to land on PPV,” Coppinger said on his Twitter.

For the Spence vs. Porter fight to not be on Fox or Showtime pay-per-view, it seems a little strange. Where is the money going to come from to pay Spence and Porter their big purses for that fight? It’s obviously not a great pay-per-view fight though, because Porter isn’t PPV fighter. He’s already been beaten twice in the past in losses to former Spence victim Kell Brook and Keith Thurman.

“Porter has got to go back to his old style to win this fight,” Eddie Hearn of Matchroom Boxing USA said to esnewreporting. “His old style of mauling, being super aggressive. Spence is strong, he can fight on the inside, and he showed against Mikey Garcia that he’s technical as well,” Hearn said.

Porter has been doing less mauling and more boxing in some of his recent fights against Yordenis Ugas and Adrian Granados. He boxed both of those guys due to the punishment that he was taking from them in close. Porter can definitely maul if he wants to though. He did that in his victory over Danny Garcia last September. It was a close fight with Porter winning by a 12 round unanimous decision by the scores 115-113, 116-112 and 115-113. The mauling that Porter did is perhaps what got him the victory. If he had stayed on the outside the entire night, Garcia likely would have out-boxed him.

Spence has the inside skills and strength to give Porter a lot of issues if he tries to maul him for 12 rounds. But it could still work for Porter if he proves to be a little bit better than Spence in close. That’s obviously the best way for Porter to try and win the fight. He’s not going to be able to handle Spence with him fighting at range like he did against Mikey Garcia last March. Spence’s arm length, and his technical skills are too good for Porter for him to be able to handle that kind of a fight. Porter needs go after Spence, and just make it ugly on the inside the way he did in his fights with Adrien Broner, Paulie Malignaggi, Andre Berto and Danny Garcia.

Top Rank Boxing promoter Bob Arum has contacted Spence’s adviser Al Haymon like he said he was going to do to try and setup a fight between him and WBO welterweight champion Terence Crawford. Arum promotes Crawford, and he wants to match him against Spence as soon as possible. Arum was saying recently in the week leading up to Crawford’s fight against Amir Khan that he would call Haymon the week after the fight to try and negotiate a deal for the Spence-Crawford fight.

Sure enough, that’s what Arum has done, according to Lance Pugmire of the LA Times. Arum isn’t saying what was said by Haymon. But suffice to say, if Arum isn’t saying anything bad about his conversation, it has to be seen as a positive. Most people believe the Spence vs. Crawford fight will get made after Spence faces Haymon’s Premier Boxing Champion fighters Porter, Keith Thurman, Manny Pacquiao and Danny Garcia. Once those guys have all fought Spence, there will be no one else for Spence to fight with PBC. At that point, he’ll need Crawford to give him another body.

“Told by Bob Arum that he did speak to Al Haymon this week regarding a bout between Terence Crawford and Errol Spence Jr. but Arum declines to reveal what was said and where it stands, which I believe we should consider progress and a positive for the sport,” said Lance Pugmire of the LA Times on his Twitter.

It’s going to be hard for the Spence-Crawford fight to get made even when the time comes for the match to get put together. Spence isn’t going to want to give Crawford a 50-50 deal if he’s not matching him for what he’s doing on pay-per-view. Unless Crawford vs. Khan brings in good PPV numbers from their recent fight on ESPN pay-per-view, Spence will use his excellent PPV totals for his fight against Mikey Garcia on Fox Sports PPV as a reason for why he deserves a better split that Crawford. With the pride that Crawford has, he likely won’t agree to a less than 50-50 deal against Spence. Hence, we won’t have a fight between them.

The way Spence looked in beating Mikey Garcia, he would probably have too much power for Crawford. Spence can do everything that Crawford can do in boxing his opponents. But what makes Spence better is he’s stronger than Crawford and bigger as well. Khan was starting to have success with Crawford in fifth and sixth rounds of their recent fight. Crawford fouled Khan with a hard low blow in the sixth round that caused the fight to be stopped.

Crawford vs. Khan does 150K PPV buys according to source »