Crawford vs. Khan does 150K PPV buys according to source 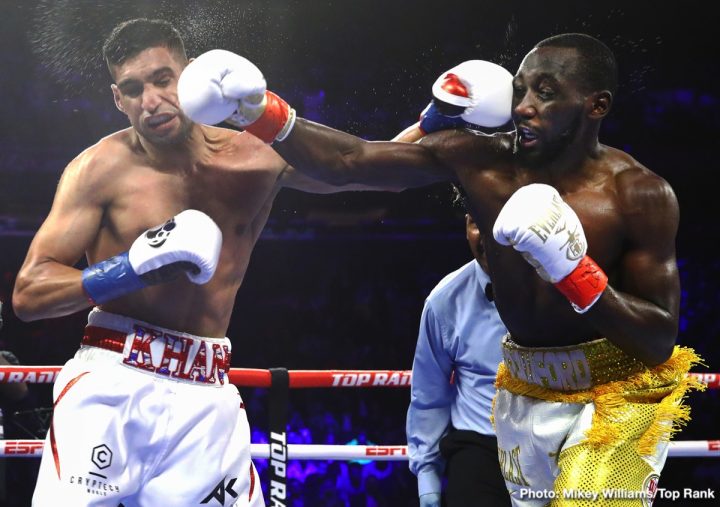 By Kenneth Friedman: It’s being reported that the Terence Crawford vs. Amir Khan brought in only 150,000 pay-per-views on ESPN last Saturday night on April 20th at Madison Square Garden in New York, according to an industry source speaking with Lance Pugmire of the LA Times.

The fight was heavily promoted by Top Rank and ESPN, and some felt that it was capable of reaching 400,000 buys. But according to Pugmire, his source has it at 150K.

That’s considerably lower than the 400,000+ PPV buys that the recent fight between IBF welterweight champion Errol Spence Jr. vs. Mikey Garcia pulled in on March 16 on Fox Sports pay-per-view from AT&T Stadium in Arlington, Texas.

Lance Pugmire said this on his social media site about the pay-per-view numbers for the Crawford vs. Khan fight:

“Arum would neither confirm nor deny info from an industry source I have that the traditional PPV buys for Terence Crawford [vs] Amir King Khan was 150k, but he responded “we’re in a new era” and that the bout’s extra “digital buys were so explosive no one has seen anything like it.”

Arum’s response to Pugmire questioning him about the validity of 150,000 PPV buys is troubling. Arum had had the perfect opportunity at that moment to deny that the 150K numbers were valid. For Arum to say, “we’re in a new era” seems strange.

If these low 150K PPV numbers are true for the Crawford-Khan fight, then it’s going to be all but impossible for Crawford to get a 50-50 deal for a unification fight against Spence in the near future. If Arum comes to the bargaining table with Spence’a adviser Al Haymon of Premier Boxing Champions and says, ‘Crawford wants a 50-50 purse split for the fight,’ he’s going to be laughed out of the room.

The potential good news about 150,000 buys for the Crawford vs. Khan fight is that they’re at least higher than the 50,000 buys Crawford pulled in for his other pay-per-view attempt against Viktor Postol in 2016. There wasn’t much interest from the boxing public in that fight despite the undercard being loaded with talent.

The possible reasons or the low PPV numbers for the Crawford vs. Khan fight are as follows:

1. Khan is viewed as washed up by many fans

2. No demand for the Crawford vs. Khan fight

3. Crawford not a pay-per-view fighter

4. U.S fans like brawlers. Crawford is a switch-hitting, counter puncher. It’s the wrong style for pay-per-view

5. The move from PPV to streaming services like DAZN

If the low PPV projections for the Crawford-Khan fight turn out to be true, Crawford won’t be able to get the 50-50 split that he wants for a fight against Spence. Crawford might need to ask for somewhere along the lines of 30%.


« Errol Spence Jr. vs. Shawn Porter close to being finalized

Hearn concerned how Joshua vs. Ruiz Jr. fight will be perceived by fans »