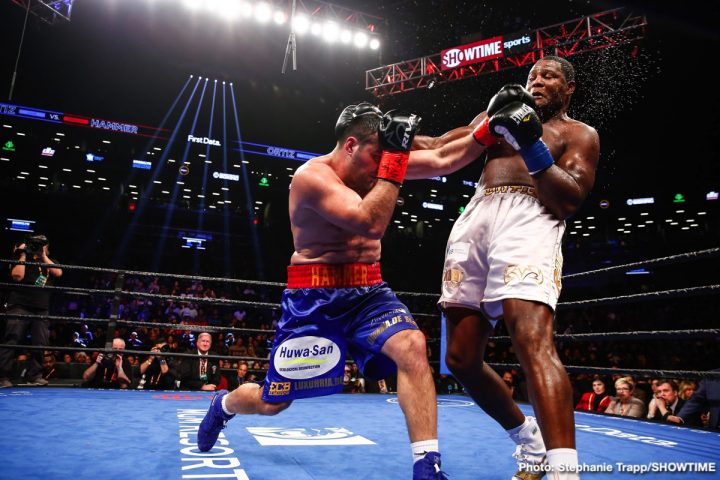 By Scott Gilfoid: Matchroom promoter Eddie Hearn claims that heavyweight champion Anthony Joshua would knockout former world title challenger Luis Ortiz in three rounds no problems if the two of them were to ever face each other. Hearn is still willing to match Joshua against Ortiz after his next fight on June 1st.

Just how useful Ortiz will be to Joshua in the future is open to debate. Now is when Joshua needs Ortiz, not after the Cuban talent loses to Deontay Wilder again.

Ortiz’s management recently rejected a reported $5 million offer from Hearn to face Joshua on June 1 on DAZN and Sky Box Office at Madison Square Garden in New York. They turned down what they saw as a “low-ball” offer from Hearn for the fight.

Hearn says he’s going to “expose” that comment next week when he reveals what was offered. It’s probably not necessary for him to do that through, as Ortiz’s manager admitted in an interview with Thaboxingvoice on Friday that he and Ortiz wanted to agree to the $5 million offer from Hearn, but it Ortiz’s promoter that wanted to get a better deal.

“Listen, Anthony Joshua would destroy Luis Ortiz, three rounds, no problem,” Hearn said to Seconds Out. “And if Ortiz wants it, it can happen after June 1st.”This shows you how serious they [Team-Wilder] are about the unification fight with Joshua.”

Hearn may not realize it now, but Joshua needs Ortiz NOW for his June 1st fight, NOT later after the Cuban has been knocked out for the second time by WBC heavyweight champion Deontay Wilder. Ortiz is said to be in the pipeline for a rematch with Wilder either in his next fight after he defends against his mandatory Dominic Breazeale on May 18 or in early 2020. Joshua (22-0, 21 KOs) needs a quality opponent for his June 1st fight in New York so that he can impress the casual fans in the States that have never seen or heard of the 2012 Olympic gold medalist from Great Britain.

“I told you I was going to expose them, then they’ve gone, ‘Actually it was our fault. I’m sick and tired of people trying to pretend Joshua is ducking fights when these guys are s— scared,” Hearn said.

Hearn seems to be completely in the dark about what happened with the Ortiz fight. They weren’t DUCKING Joshua. They were trying to get a better deal for more loot, that’s all it was. Ortiz wanted the fight, as did his manager. It was promoter was doing his job trying to get a better deal for his fighter Ortiz, and Hearn gave up on the fight and moved on. Ortiz wasn’t ducking the fight with Joshua because he’s afraid of him. It’s his promoter trying to do his job to get a good deal for his fighter Ortiz. If Hearn would have continued the negotiations with Ortiz, they probably would have had a deal put together a long time ago. Instead of Hearn wasting time putting together the mismatch between Joshua and Ruiz, a fight that no one wants to see, he should be trying to restart the negotiations with “King Kong” Ortiz so that could have a good opponent for the U.S casual boxing fans to see Joshua fighting on June 1st. It goes without saying that Joshua vs. Ortiz is a far better fight than Joshua-Ruiz.

The way that Hearn was banging on about the hefty Andy Ruiz Jr. last Saturday night while attending the Srisaket Sor Rungvisai vs. Juan Francisco Estrada fight, it seems painfully obvious that he’s going to use him as the opponent for Joshua on June 1st. Personally speaking, I think it’s a royal mistake of the first order for Hearn to make a Joshua vs. Ruiz fight. It’s going to look bad starting with the news conferences ending with the fight, which will be a mismatch.


« Prograis vs. Relikh & Donaire vs. Young tonight on DAZN

Errol Spence Jr. vs. Shawn Porter close to being finalized »