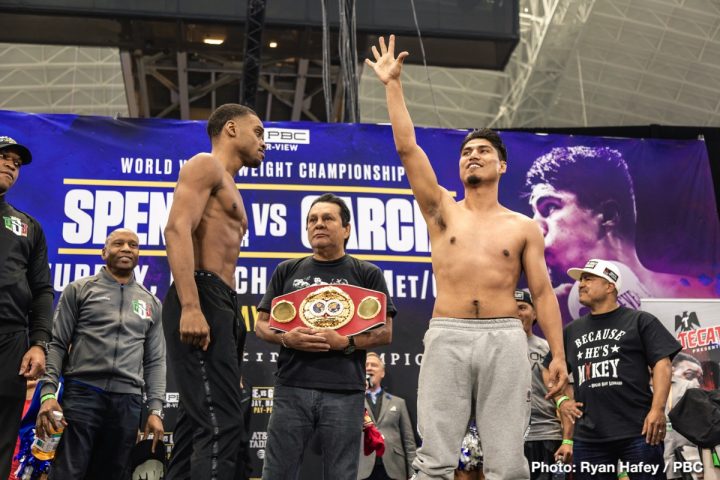 By Dan Ambrose: Adrien Broner says tonight’s fight between Errol Spence Jr. and Mikey Garcia won’t go beyond the fourth round, as he sees Spence easily overpowering Mikey to get a stoppage win. Broner believes that Mikey’s corner wont let him take a beating from Spence, and they’ll just pull him out when he starts getting the worst of it.

Broner, 29, has been in with both fighters before, and he feels that Spence is the better fighter than Garcia, who beat him by a 12 round unanimous decision in July 2017.

“I don’t see it going past four. They aren’t going to let him [Errol Spence] hurt that body,” Adrien Broner said to esnewsreporting about Mikey Garcia not going past the fourth round against Spence. “What does he got to lose? He loses the fight, gets stopped, and goes back down and dominates the [lightweight] division. I don’t think so,” Broner said when asked if Mikey hits hard enough to keep Spence off of him. “I’ve been in there with both fighters. Errol is a better boxer than what people think. People think he just tries to beat people down and knock them out, but Errol can box. I don’t see anything he [Mikey] can do,” Broner said.

It’s going to be tough for Garcia to win this fight. The way he looked at the weigh-in, he had a smile on his face that looked like he was just happy to be there. Garcia didn’t have the game face that one gets accustomed to seeing from fighters that are going to go out there try and actually win. Garcia looks like he’s just there for the payday. Hopefully that’s not the case, but more than a few boxing fans feel that way.

If things start going badly for Garcia, 31, we may see him get pulled early by his trainer Robert Garcia. That happened. Coming events cast their shadows before. In 2013, Mikey was getting worked over by Orlando Salido, and Robert Garcia pulled him out of the fight, saying that he had a broken nose. A lot of fighters don’t give up when they suffer a broken nose. They keep fighting. It was the timing of Robert having the fight stopped that looked bad, as Salido was starting to take over the fight, and Mikey was looking tired, worried and getting hit with a lot of body shots. Those body shots from Salido were draining Mikey like a battery. It was so fast how Salido was able to weaken Mikey once he started hitting him with body shots. The next thing you know, Robert pulled Mikey out of the fight, saying he had a broken nose. The fight then went to scorecards, and Mikey won an eight round technical decision. If that happens tonight, we could see Mikey push hard in the first six rounds to try and build a small lead, and then when/if the fight is stopped due to an injury by Mikey, he would have a shot at winning a technical decision like he did against Salido. Interestingly enough, Mikey didn’t take heat from the boxing fans for beating Salido in that manner. There was no rematch between them. So it’s possible that if Mikey wins like that tonight, the fans won’t be on his case, and won’t pressure him to give Spence a rematch.

Broner also wants a rematch with Marcos Maidana (35-5, 31 KOs) as soon as he resumes his career. Maidana, 35, is making a comeback to boxing after being retired for five years. He’s got a lot of weight to lose before he’s in good enough shape to start fighting again. Once he does return, Broner (33-4-1, 24 KOs) so that he can avenge his loss to him from 2013. That was Broner’s first career defeat in losing a 12 round decision.

If Maidana gets into any kind of shape return to the ring, he’ll have a good shot at defeating Broner a second time. Broner has lost 2 out of his last 4 fights, and looks like he’s not the same guy that he once was. For all that, there’s still a lot of money Broner can make fighting Maidana a second time, as long as neither fighter gets beaten before they face each other again. Broner just lost to Manny Pacquiao last January by a 12 round decision. Broner can’t keep losing. He was beaten by Mikey in 2017, and by Shawn Porter in 2015.

“Honestly, I thought Porter lost,” Broner said about Shawn Porter’s recent controversial fight against Yordenis Ugas. “I’m just being honest. They always talk a lot of s— about me. I don’t give a f— about Ugas.”

Broner is like a lot of boxing fans, who felt that Shawn Porter should have lost his fight against Yordenis Ugas last Saturday night. Broner didn’t mention whether he wants to fight Porter, 31, in a rematch to try and avenge his loss to him from four years ago. That might be a bad idea for Broner to fight Porter again if he has his sights set on facing Maidana a second time.

Maidana might hold off on a Broner rematch until he fights Pacquiao. There’s talk that those two could face each other in the future. That would be a good fight. Maidana is a huge puncher, as long as he’s in good shape, he would be a threat to beating Pacquiao if he can land his shots, and if his stamina stays to together. Pacquiao recently retired 36-year-old Lucas Matthysse last July in stopping him in the 7th round. Maidana is a little bigger than Matthysse, and he arguably hits harder, and would be a tough foe for Pacquiao, as long as he’s in excellent shape for the fight. No one knows for sure what Maidana will be like when he resumes his pro career. He was still fighting at a high level when he was beaten in back to back fights by Floyd Mayweather Jr. in 2014, but that was five years ago. A lot might have changed since then with Maidana putting on a great deal of weight, and living the soft life of a retired fighter. Maidana still has so much weight to take off, it’s going to be difficult for him to trim off all that weight without losing muscle in the process, and ending up weak. Broner might not be the same guy that he once was, but he’s been active, and he hasn’t abused his body by packing a ton of weight the way that Maidana has. It could be that Broner will have too much youth for Maidana to deal with when the time comes for them to face each other, if they ever do.