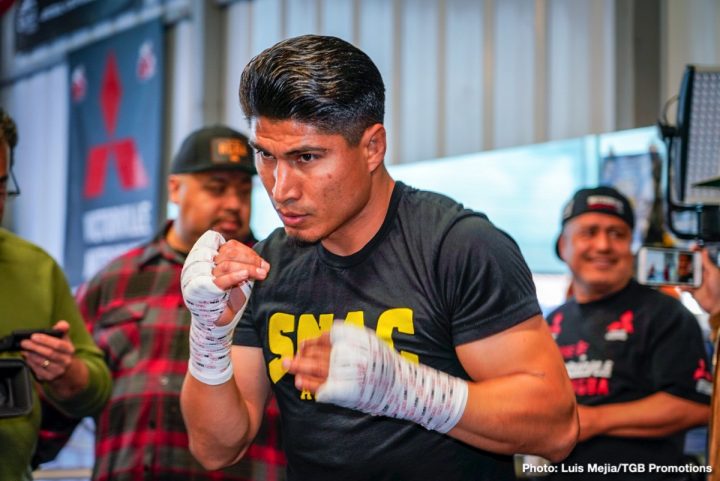 By Aragon Garcia: Four division world champion Mikey Garcia (39-0, 30 KOs) is on the cusp of stardom tonight with his fight against IBF welterweight champion Errol Spence Jr. The only thing that is separating Mikey from taking his career to the next level to be the monster star in boxing is an upset victory over the heavy favorite Spence (24-0, 21 KOs) on PBC on FOX Sports pay-per-view at the AT&T Stadium in Arlington, Texas.

The upset-minded Mikey is like a bow string that has been pulled back for 31 years, and it’s about to be released tonight when he takes on Spence in front of a natural audience. The sport has been looking for a replacement for Floyd Mayweather Jr. since his stopped fighting against professional boxers in 2015. Saul Canelo Alvarez, and Gennady Golovkin have failed to take the baton from Mayweather and run with it. Mikey could be that guy that takes over as the next big thing in the sport. All he needs to do is beat Spence. It doesn’t need to be a knockout victory, although that would help.

Tonight’s Spence vs. Garcia is expected to bring in 1 million pay-per-view buys on Fox Sports. That means a lot of fans are going to get a chance to see Mikey’s coming out party tonight. All he needs to do is show, and do is job by beating Spence, 29, and he punch his ticket as the next star in boxing.

Spence has got other ideas though, thinking HE’S going to be next star in the sport, not Mikey. Spence also thinks he’s going to be elevated to #1 on the pound-4-pound list with a ‘W’ over Garcia. But Spence also worries whether he’ll receive the credit that he feels he’ll deserve for beating Garcia because of the size difference between the twp. Mikey is moving up 2 divisions to take the fight, and that means that Spence is going to be seen as a bully in the eyes of a lot of boxing fans for picking a guy that is so much smaller than him.

“They’ll say he’s too small,” Spence said. “If I beat him up throughout the whole fight, they’ll say, ‘He has amazing heart for a little guy. Errol Spence is supposed to do that, he’s the bigger welterweight.’ So even if (Garcia) looks good, they’ll say, ‘The smaller guy looked good, he just couldn’t hold up the weight.'”

The four division world champion Mikey believes that he’s got more than enough talent to hand Spence his first defeat tonight. He’s seen the holes in Spence’s game from having studied his past fights, and he understands exactly what he needs to do to outbox the Texas native, and if the opportunity presents itself, knock him out tonight in front of many of his own fans. Mikey isn’t worried about Spence’s size, because he already knows how to negate that by using his skills. Spence is big, slow and he throws wide shots to the head and body, which makes him hittable.

“I have all the tools and all the skills needed to beat Errol Spence Jr,” Garcia said. When it comes to timing, speed, reflexes and defense, you name it, I’m better,” Mikey Garcia said.

The ideal for Garcia to get the win over Spence in this fight is to box him early while he’s at most dangerous, and then drag him into the later rounds to wear him down to get a decision or a knockout. Garcia will need be quick in going on strafing runs to hit Spence with rapid fire, machine gun like shots, and then get away before he can land his big shots in return. Spence is a slow moving target, and he’s there be be picked off by fast shots to the head and body. Mikey is the better inside fighter by far. Although Spence has a reputation for being a good inside fighter, but he’s really not. He’s been able to get over on his weaker opponents by shoving them against the ropes, and then leaning on them with his upper body while hitting them with big wind up cannon shots. The referees that have worked Spence’s past fights have done a poor job of officiated in controlling his practice of leaning against his opponent’s chest to keep them pinned against the ropes. The referees are supposed to separate the fighters to keep one from being able to trap their opponents in an MMA-like way. Mikey’s trainer Robert Garcia will need to keep his eye on the action to make sure he complains to the referee if Spence is using his pinning tactics against him. Mikey isn’t thinking knockout, but if he sees his opportunity, he’s going to take advantage of it by getting Spence out of there.

Mikey reveals that he feels that he’s simply the better fighter than Spence. Garcia, 31, admits that Spence is a lot like him with the way he fights, but not as good. Mikey believes Spence hasn’t learned enough in the sport in his seven years as a pro to be the better fighter.

“I believe I’m better than him in every category, the footwork, timing, and the defense,” Mikey said. “We’ll find out on Saturday night if his power is greater than I expected or if my poster is greater than he expected. This is going to be determined. I’m going to overcome the size. If I can accomplish this, I’ll be forever remembered for this fight. The greatest have taken on the biggest challenges, and that’s what I’m doing. Winning this fight will forever cement my name. At the moment, no one else is doing this, and I’m willing to do whatever it takes to win this fight,” Mikey said.

Mikey is purposefully being vague about what his game plan is for the fight. He doesn’t want to let Spence and his trainer know what he’s going to be doing tonight, because they’ll have a strategy to try and potentially stop him from carrying out his game plan.

This fight is going to be an interesting tactical battle. Spence could get get the better of Mikey early, but late in the fight is where it’s going to get interesting once Mikey figures him out.