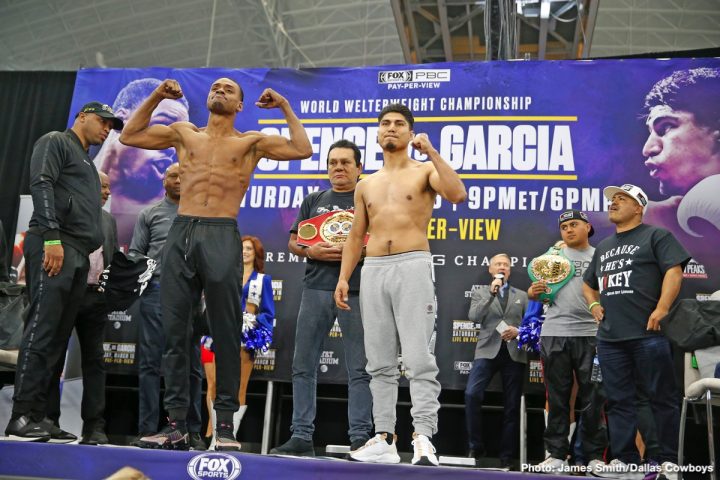 By Mike Smith: Errol Spence Jr. and Mikey Garcia will both be getting a purse of $3 million each for their fight tonight on Premier Boxing Champions on FOX Sports pay-per-view at AT&T Stadium in Arlington, Texas, according to Dan Rafael. However, they both could make a lot more money in extra revenue from the pay-per-view.

Both fighters are going to get a career high payday. If the fight does more than 1 million buys, a rematch between them will be hard for them to say no to. Saul Canelo Alvarez and Gennady Golovkin fought each other in a rematch after their first fight pulled in 1 million buys. We could see the same with Spence and Garcia, but of course it’ll depend on how competitive fight is, and also whether the winner will want to face Manny Pacquiao (61-7-3, 39 KOs) in a pay-per-view fight in July, which is when the Filipino star will be fighting next.

Pacquiao, 40, is at the stage of his career where the Spence vs. Garcia winner can’t afford make him wait. They’ll need to fight him because the opportunity might be there for them ever again if he retires in near future.

Mikey isn’t sure which direction he’ll go in if he wins the fight. He’s got options, he says. He can move back down to lightweight, move to 140 and look for big fights there, or he can remain at 147 and fight Pacquiao in a unification. Mikey could stay at welterweight and look to face the other champions or he could vacate and move back down to 135 to defend his WBC lightweight title against #1 WBC mandatory Luke Campbell.

“I’m not sure what I’ll do,” Mikey said. “I definitely have options. The welterweight division is stacked. There’s Manny Pacquiao, Keith Thurman, Danny Garcia and Shawn Porter. I still don’t know what I’m going to do after this fight. I can come down or I can stay here. I’ll see what the best option is for me. My brother and father didn’t want this fight. ‘You don’t need to move up in weight. You can fight at lightweight or light welterweight,” Mikey said.

If the fight does reach 1 million buys, the two of them could walk away with a lot more money than their $3 million guaranteed purses. It wouldn’t be surprising if they both ended up with $10 million for their fight in Arlington, Texas.

Pacquiao will be there live tonight at ringside for the Spence-Garcia fight at AT&T Stadium to see the two fighters face each other in their title fight at 147. Pacquiao says either of these guys would be good options for him, according to ESPN. Pacquiao favors Spence to win the fight tonight, which would make his choice easier to pick from. Pacquiao isn’t the type to pick the loser of the fight rather than the winner. So that puts added pressure on Spence and Garcia to fight as hard as they can to win tonight, because Pacquiao could be waiting in the wings to face the winner.

Spence has his IBF welterweight strap that the two will be fighting over. Mikey, 31, wants to win his fifth division world title. Now that Pacquiao is no longer with Top Rank Boxing, and is now signed with PBC, he has the chance to fight the likes of Spence, Garcia, Shawn Porter, Danny Garcia and Keith Thurman. Spence and Mikey Garcia are the hot hands right now, as both are still in their prime, undefeated and looking sensational. A ring rusty Thurman looked bad recently in struggling to beat Josesito Lopez in his comeback fight last January. Porter, 31, looked horrible in winning a controversial 12 round split decision over Yordenis Ugas last Saturday night on March 9. Danny Garcia has lost two out of his last three fights. The only guys that are fighting at a high level right now with PBC at 147 is Spence, and Mikey is looking great at 135. Pacquiao can’t go wrong in fighting the winner of the Spence vs. Garcia fight.

“My window [for my next fight] is in July,” Pacquiao said to ESPN.com. “We don’t know yet who I will fight. We didn’t discuss my opponent for the next fight, but I can fight anybody. Right now I don’t have an idea who is my opponent…I have to talk to Al to ask him about my possible opponents.”

The fact that Pacquiao will be attending the Spence vs. Garcia fight tonight is a pretty big indication that he’s thinking about fighting the winner of that fight. There’s a lot of money for Pacquiao to make fighting either of those guys. Thurman would be a good option if he didn’t look so poor in his last fight against Josesito Lopez last January, if he hadn’t been so inactive. Pacquiao can probably make more money fighting the Spence vs. Garcia winner than in facing Thurman, Danny Garcia or Shawn Porter. Pacquiao’s manager Al Haymon might choose to match Pacquiao against Thurman or Danny Garcia, though. Porter would be an unlikely fight for Pacquiao, because he’s coming off of a controversial win over Yordenis Ugas.

Pacquiao would like to fight Floyd Mayweather Jr. in a rematch, but he’s currently retired, and not talking of wanting to return to the ring to fight in a professional match. If Pacquiao is looking for the biggest payday against an unbeaten welterweight, then the winner of tonight’s fight between Spence and Garcia is the way to go for Manny. Pacquiao says he’s interested in a “real fight.” That would obviously be Spence or Mikey Garcia.

Mikey intends on beating Spence. Contrary to popular opinion, Garcia’s not showing up for just the payday tonight. He’s coming to win. If Spence doesn’t have his game sorted out tonight, he’s going to lose his IBF belt, and he’ll go home the loser. Spence doesn’t live far from the AT&T Stadium in Arlington, Texas, so he won’t need to drive far to go back home. That’s good and bad. Fighters that lose far away from home, they have a lot of time to stew on their defeat when they’re taking a long flight back home. Spence won’t have to deal with that if he loses tonight. He’ll short drive home, and he’ll be able to sit think about what went wrong, what he could have done better, and decide from there what his next move is.

“I have all the tools and all the skills needed to beat Errol Spence Jr,” Garcia said. “When it comes to timing, speed, reflexes and defense, you name it, I’m better.”

Mikey has beaten best in boxing over the years. There’s nothing that Spence can show him tonight that he hasn’t seen before during his career, But with that said, Mikey hasn’t fought a guy with the same size and punching power that Spence possesses. The shots that Mikey has been hit with before in the past from smaller guys could be a lot more hurtful with Spence being the one that’s landing them tonight. Mikey might not be able to handle those shots as well. Mikey’s punching power has been the factor behind his wins. If he can’t hurt Spence with his best shots tonight, then it’s going to get really interesting. Mikey can’t let Spence hit him for 12 rounds, so he’ll need nullify his offense by using movement and clinching to tie him up. That’s easier said than done. Spence cuts off the ring well and he’s too powerful to tie him up consistently to prevent him from getting his shots off. Mikey has great boxing skills, but if he can’t keep Spence off of him, it’s going to be a long night. Mikey will need to use upper body movement, and his quick hands to land the cleaner shots. He can win rounds that way by landing the better shots, but it’s going to be hard for him to stay in there for the full 12 rounds if Spence is able to land his big punches.