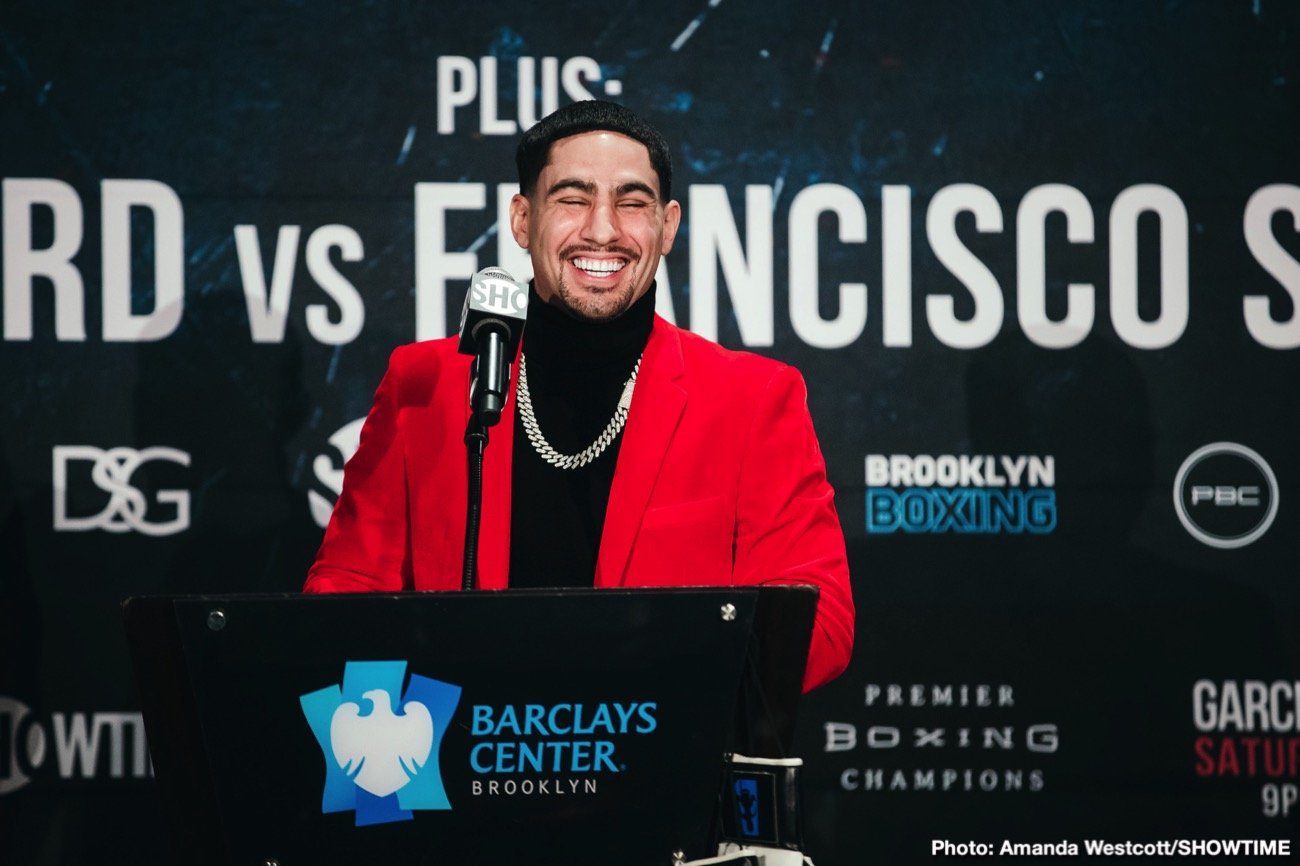 By Aragon Garcia: Danny Garcia slammed ESPN commentator Tim Bradley on Wednesday in calling him a “Top Rank puppet” for the way that he dared the Premier Boxing Champions welterweights to cross the pond and take on WBO welterweight champion Terence Crawford.

Bradley called Crawford the #1 welterweight on the planet, and he challenged the PBC welterweights to get some courage and face him.

Tim Bradley is asking Garcia to fight on different network

Garcia (35-2, 21 KOs) sees it as funny that Bradley wants him to go to the other side of the street to fight Crawford on ESPN, when Tim never did when he was with Top Rank. Danny points out that during Bradley’s career with Top Rank, he only fought their fighters, and NOT the PBC guys. In other words, Bradley wants Garcia to do what he never did himself by fighting guys with a different promoter and network than himself.

The way Bradley challenged the PBC welterweights to face Crawford was in an off-putting way, making it seem like they need find some courage. The reality is that Crawford fights on ESPN, and is promoted by Top Rank. The PBC welterweights have different management, and fight on Fox and Showtime.

“I seen that. I used to like Tim Bradley, but I don’t respect him anymore though,” said Garcia. “He ain’t nothing but a Top Rank puppet, who fought Top Rank fighters his whole career. He never fought anybody outside of Top Rank. If you’re so worried, come out of retirement. You’re a Top Rank fighter. Fight Terence Crawford. That would be an easy fight to be made.

“It sounds like he’s [Bradley] hating to me,” said Bradley. “I know the difference between facts and hating. And I used to respect Tim Bradley. I thought he was a great champion, a tough guy, but I feel the same way about him as he does about us. He [Bradley] should thank Manny Pacquiao for giving him three big paydays, because he can’t sell,” said Garcia.

Bradley is trying hard to help Top Rank, ESPN and Crawford by trying to motivate the PBC fighters by getting emotional, and daring them to cross the pond. Unfortunately, there’s no incentive for them to do so.

Terence has a lot of negatives

Crawford isn’t a Mayweather-like super star, and he’s got a fighting style that is often VERY negative. In one of Crawford’s performances, he brawled in his last fight against WBO mandatory Egidijus Kavaliauskas last Saturday, but that’s not how he normally fights.

Crawford normally boxes his opponents, and uses movement. Although Crawford is technically fights out of the orthodox stance, he frequently switches to southpaw, and is effective in doing that. A lot of fighters don’t want to face southpaws, especially they have a big fan base. Crawford is also a counter puncher, and those are fighters that tended to be avoided as well. On top of those three negatives, Crawford moves a lot, and he fights on a different network than the PBC fighters.

“The only real man over at PBC is Deontay Wilder,” said Bradley during the ESPN broadcast last Saturday. “You want to know why? Because he’s going to be fighting Tyson Fury in February. You guys over there [at Premier Boxing Champions], and all the other welterweights over there, this man [Crawford] is BEGGING to fight you. And he’s going to continue to beg to fight you guys. “You guys need to put your big boy pants on, and come over and make this fight with Terence ‘Bud’ Crawford, because he’s the best welterweight in the world, period,” said an emotional Bradley.

It looked odd for Bradley to be using his air time on ESPN last Saturday to give a passionate speech in appearing to scold the PBC fighters for not fighting Crawford. Top Rank promoter Bob Arum might be able to get PBC fighter Shawn Porter to face Crawford, but that’s still not a certainty. Errol Spence had talked of wanting to fight Crawford, but it’s unknown if that’ll ever happen. Spence’s car crash last October makes it unclear if a fight between him and Crawford will ever happen.

The plan is to dominate Redkach says Garcia

“We wanted to fight a southpaw, because our next fight is definitely going to be a southpaw,” said Danny Garcia to Fighthype in hinting his next match will be Pacquiao. “Might as well start early. The plan is to go in there, work smart, and feel my way through the fight and land the big shots. I know I got to some here on January 25th, and look good and win,” said Danny.

There’s a good chance that Garcia will dominate Ivan Redkach (23-4-1, 18 KOs) in their fight on January 25 at the Barclays Center in Brooklyn, New York. Redkach, 33, is tough but limited talent-wise. When he’s stepped up against higher level opposition in the past, he’s lost. Garcia is a higher level fighter, so he should have little problems beating Redkach as well.

Redkach has losses to these fighters:

The losses for Redkach against Molina Jr. and Zlaticanin were 4th round knockout defeats. Recently, Redkach picked up his biggest career win in defeating former two division world champion Devon Alexander by a 6th round knockout last June. However, Alexander was way past his prime by the time Redkach fought him. going into that fight, Alexander had lost 4 out of his last 7 fights.

Danny Garcia wants Pacquiao next in 2020

“For sure, those are the fights that I want,” said Garcia about Pacquiao possibly being his next opponent if he beats Redkach. “I was wishing I was fighting the Spence fight, but everything happens for a reason. I got Redkach in front of me. It’s going to be a big fight, and a big fight for my fans. All my fans are going to come out, and show me love, and I’m going to give them a great performance, and build up more hype for those big fights.

“I’m the king of Brooklyn Boxing at the Barclays Center.  Definitely,” said Garcia when asked if he’d like to fight Shawn Porter and Keith Thurman again. “Those were two close fights that I thought I won. In my heart, I felt like I won. I don’t feel like he beat me. I’ll take it on paper, but I’ll never accept it in my heart. I’ll come back stronger, and when those fights come back, I’ll definitely avenge those,” said Garcia.

There’s a very good chance that Garcia WILL get the fight against Manny Pacquiao in 2020, as long as he beats Redkach. Garcia also wants to fight Errol Spence Jr., but that fight is less likely to happen next year. Based on the way that Spence has been keeping a low profile since his car crash last October, it doesn’t look like he’ll fight next year.

Garcia says Top Rank is worried about him

“I feel like I got to come in here and dominate, because my last two appearances didn’t go as planned,” said Danny Garcia about his fights against Shawn Porter and Keith Thurman that he lost at the Barclays Center. “They were close and competitive fights. We want the biggest fights, Pacquiao and Spence. Oh yeah, for sure. I already feel like I should have been on pay-per-view,” said Garcia.

Top Rank promoter Bob Arum ruled out using Garcia as an opponent for Crawford, as he doesn’t see him as being competitive. The only PBC fighters that Arum wants for Pacquiao is Spence and Porter. Arum isn’t showing interest in Garcia, Manny Pacquiao or Keith Thurman for a fight with Crawford.