By Dan Ambrose: Trainer Angel Garcia denies that the smallish Danny Garcia lacks the size for the 154-lb division, and he believes he’s going to shine against career-long welterweight Jose Benavidez Jr this Saturday night on Showtime at the Barkley Center in Brooklyn, New York.

Picking welterweight Jose Benavidez Jr. for Danny to fight in his debut at 154 is silly. It will give casual boxing fans a false picture of Garcia’s potential at junior middleweight. It’s similar to when Danny fought little Rod Salka in his debut at welterweight in 2014.

Instead of Danny fighting a real 147-pounder, he fought a 13o-pounder, as Salka was a super featherweight that was pulled up in weight to be his opponent for his debut at welterweight. As you would imagine, Danny looked spectacular in his first fight at 147, demolishing Salka in two rounds.

The casuals at the time failed to realize that Danny was being matched against a much smaller fighter that had no business fighting at 147.

On Saturday, we’re going to see the same thing with Danny matched against a welterweight instead of a junior middleweight in his debut at 154, and it’s pathetic.

“It’s not really rust. We’ve been sparring. It’s not rust; we’ve been sparring in the gym,” said Angel Garcia to Fight Hub TV when told that Danny Garcia has ring rust from two years of inactivity since his last fight in 2020. “We’re not rusty. It’s just that we’re not in the spotlight rusty.

“We’ve been sparring. It’s not like Danny forgot to throw a goddamn jab. The people that say that are people that never fought. You never forget how to ride a bicycle.

“That would be a great fight,” Angel said when asked if Danny Garcia would be interested in fighting Errol Spence again if the opportunity presented itself to him. “No, 154. We’re never going back down again [to 147] ever. Why in reverse?

“We’re not going in reverse. Listen, we should have been 154 years ago because we got offered a fight with Cotto when he was retiring. I should have did it.

“There are two things that I regret in not taking the Cotto fight at 154, and I regret not fighting Peterson. We fought him at a catchweight when Peterson was the IBF champion. Danny would have been unified IBF, WBA, WBC, and Ring Magazine champion at 40.

“The people that say that [Garcia is too small for 154]. When Danny was champion at 140, they say he was cherry-picking. He wasn’t fighting the killers. Does it matter what they say? He’s not a smaller guy.

“He’s 5’9″, and on fight night, he’s probably going to weigh 160 lbs. He’ll be a middleweight by Saturday night, so what’s small about him? The guy is only one inch taller. What is that?” said Angel about the 5’10” Jose Benavidez, who looked bigger than Danny when the two came face to face during Thursday’s final press conference.

“It’s not like that Mexican kid that is 6’1″. Now, that’s tall. He just comes with his will to win,” Angel said about Benavidez Jr. “The Latino in him.

“It’s nothing new to us. We just got to stay focused and stick to our game plan, and Danny will be successful. The thing is, can he [Benavidez Jr] take a shot because Danny is going to give them back. 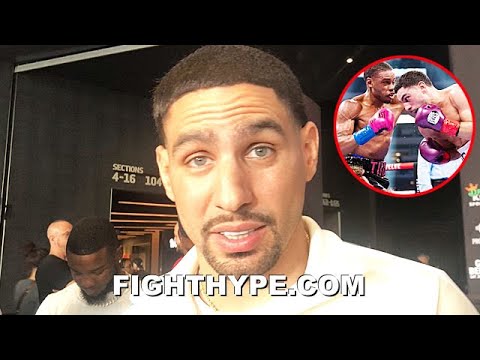