If this were the same version of Benavidez Jr that fought Terence Crawford in 2018, you’d have to say that Danny was in for a long night on Saturday. Benavidez Jr. has let his career slip since that fight, fighting only once in the last four years.

The 34-year-old former two-division world champion Garcia is coming off a long layoff to take this 12-round fight. Still, he feels confident that he’s got the firepower to stop former welterweight world title challenger Benavidez Jr.

With the weight for the fight at 154, it’s difficult to say how Danny will look because he appeared too small for the 147-lb division.

Garcia’s record at welterweight was a poor 8-3 after moving up to 147 in 2014. Danny lost to the only three quality fighters he faced at 147 and likely would have been beaten if he’d stayed and taken on Terence Crawford and Jaron ‘Boots’ Ennis.

“He’s going to see how big I am on Saturday,” said Danny Garcia to the media on Thursday when told that Jose Benavidez Jr is saying that he’s “too small” for the 154-lb division.

“I’ve sparred my brother too, but you’re not going hard; it’s not the same thing,” said Danny about Jose Benevidez Jr, bragging about sparring his super middleweight brother David Benavidez.

“We want to knock him out, but we’re ready for 12,” said Garcia when asked for his prediction on his fight with Benavidez.

“I want to knock him out in the seventh round because I know he’s going to be in front of me. I’m going to go in there and make a statement. Everybody comes out and has a great night for the Danny Garcia show,” said Danny.

There’s a lot of pressure on Garcia to win big on Saturday night because he needs to make a statement in this fight to convince the boxing world that he’s got the ability to be a major player at 154.

The nearly two years of inactivity that Danny has had going into this fight likely won’t help him, and he could very well struggle at the weight.

It was a wise move by Garcia’s management to pick an inactive 147-pounder for his debut at 154 rather than a legitimate contender in the weight class because that increases his chances of looking good and impressing fans.

He might lose if they threw Danny in with the likes of Sebastian Fundora, Israil Madrimov, or Tim Tszyu for his debut. 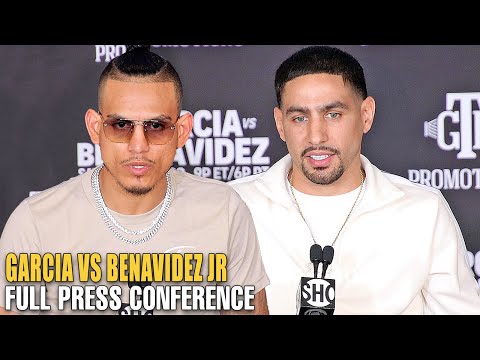 
« Andy Ruiz to get title shot if he beats Luis Ortiz in WBC title eliminator on Sept.4th