Pacquiao training at Wildcard with Roach for Broner fight 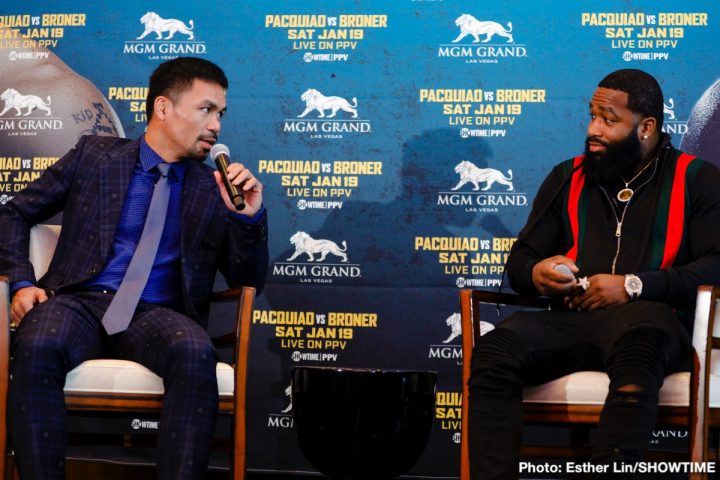 By Chris Williams: Manny Pacquiao (60-7-2, 39 KOs) is back at the Wild Card Boxing Club in Los Angeles, California to train with coaches Freddie Roach and Buboy Fernandez to get ready for his title defense of his WBA ‘regular’ welterweight belt against challenger Adrien ‘The Problem’ Broner (33-3-1, 24 KOs) on January 19 at the MGM Grand in Las Vegas, Nevada. Pacquiao, 40, flew over to Los Angeles on December 22 to start the crucial point of his training camp to prepare for the Broner fight.

Broner, 5’7″, hasn’t given any hints about his strategy to try and unseat Pacquiao as the WBA World welterweight strap, but it’s going to take a different approach than what we’ve seen from the Cincinnati native in his last two fights against Jessie Vargas and Mikey Garcia. If Broner fights passively against Pacquiao like he did against those two fighters, he’s going to get picked apart and knocked out. Broner has never been knocked out before, but there’s a very real chance he’ll get stopped by Pacquiao. For Broner, this could be the beginning of the end for him as a useful B-side player for the bigger names. When you look at what’s become of Broner’s once successful career, it’s hard to believe how far he’s fallen in the last six years. Broner has gone from being a world championship level fighter to that of an opponent. Broner is no longer winning fights, and is quickly running out of time for useful as the opponent for the A-side guys.

NEWS:   Adrien Broner to fight Ivan Redkach in January at 140

Pacquiao is going to quickly soak up enough information in a short period at the Wildcard to use what he’s learned to defeat Broner, who has big ideas of pulling off an upset against the Filipino star. It’s going to be tough for Broner to overcome all the experience, as well as the physical tools that Pacquiao will be draw from in this fight. Pacquiao has a big advantage over Broner with his speed, work rate and punching power. With those things alone, Pacquiao will be hard to beat on January 19. The experience that Pacquiao has on his side in the fight is going to make it all but impossible Broner to win.

Pacquiao vs. Broner will be shown on SHOWTIME PPV on January 19. The fight is presented by Premier Boxing Champions. The PPV card begins at 9:00 p.m. ET / 6:00 p.m. PT.

“Life begins at 40,” said Pacquiao. “Physically, I still feel like I am 25, but with the benefit of the wisdom that comes from the added years of my life experience. I still have a lot I want to accomplish as an athlete, a public servant, and a father, husband and son. I look forward to adding more chapters to my life story.”

The way Pacquiao fought in his last fight against Lucas Matthysse, he looks to be fighting at a higher level than he did six years ago when he lost to Tim Bradley and Juan Manuel Marquez in consecutive fights. Whether it’s a different training regimen or more rest that’s helping Pacquiao look so great is unknown. The only thing we do know is if Pacquiao is on the same level as he was in his last fight against Matthysse, Broner is going to be in trouble on January 19. Pacquiao is looking too fast, too powerful and too skilled for a struggling fighter like Broner to hang with him.

Pacquiao showed that he didn’t need trainer Roach in his last fight, knocking out Matthysse in the 7th round in Malaysia last July. Pacquiao looked unstoppable in that fight, hurting Matthysse seemingly with every shot he threw. The power and speed that Pacquiao displayed in that fight was impressive. This was not the same Pacquiao that the boxing fans had seen in his previous bout against Jeff Horn in July of 2017. Pacquiao was much improved physically, and his power was on another level. There aren’t too many fighters in the welterweight division that would have withstood the huge shots that he was hitting Matthysse with in that match.

Things could be better for Broner, who hasn’t won a fight since his controversial 10 round decision win Adrian Granados in 2017. Broner has come up empty in his last two fights against Jessie Vargas and Mikey Garcia. Broner, 29, fought to a 12 round draw against Vargas last April at the Barclays Center in Brooklyn, New York. Broner waited too long to start pushing the fight to Vargas. When Broner did finally start rallying, he was too far behind in the fight to get the victory. Although Broner didn’t like getting a raw, it could have been worse for him. A lot of boxing fans thought Broner deserved a loss. He basically fought the same way he did in his defeat to Mikey Garcia in July 2017. In that fight, Broner fought passively in the first six rounds, throwing few punches and looking like he was afraid of running into one of Mikey’s powerful left hand counters. By the 7th round, it was clear that Broner needed to do something to get himself into the fight. That’s when he started to slowly walk Mikey down to win some rounds. However, Broner was too far behind in the fight to salvage a victory, and he was fighting like he was afraid of running into one of Garcia’s powerful left hand counters.

In Broner, Pacquiao has the ideal guy for him to look good against on January 19 in front of the paying public on SHOWTIME PPV. You have to question the wisdom of putting Pacquiao vs. Broner on SHOWTIME pay-per-view. This is not a PPV worthy fight in the eyes a lot of boxing fans. Maybe if this was still 2012, before Broner was exposed by Marcos Maidana, Shawn Porter, Mikey Garcia, Adrian Granados and Jessie Vargas, boxing fans might be interested in paying to see the fight. Broner has had too many poor performances, and you can say the same about Pacquiao. His losses to Jeff Horn and Floyd Mayweather Jr. has hurt Pacquiao’s popularity. Pacquiao should have never agreed to fight Horn in Australia in the first place. That was a wrong-headed idea on Pacquiao’s part. It’s not surprising that Pacquiao lost the fight, but it could have been avoided if he’d been assertive and rejected the idea of fighting Horn in his home country in Australia.

Pacquiao doesn’t need Roach to help him beat a fighter like Broner. This is a fight that he wins even if he had one of his helpers take him through his paces during training camp. Pacquiao is on another level than Broner, who doesn’t belong at 147 nor at 140. Broner was only good at 130 and 135, and the reason for that is the size advantage that he had over his opposition. Without the size advantage, Broner is nothing special. He’s not fast, not powerful, and not overly skilled. He’s like a fish out of water in the 147 pound weight class. It’s too bad Broner can’t melt back down to super featherweight, because that’s the only weight class that he would have a chance of doing well at right now in this writer’s estimation. He’s not talented enough to beat the top lightweights, and he would be lost against the best fighters from the 140 lb weight class.