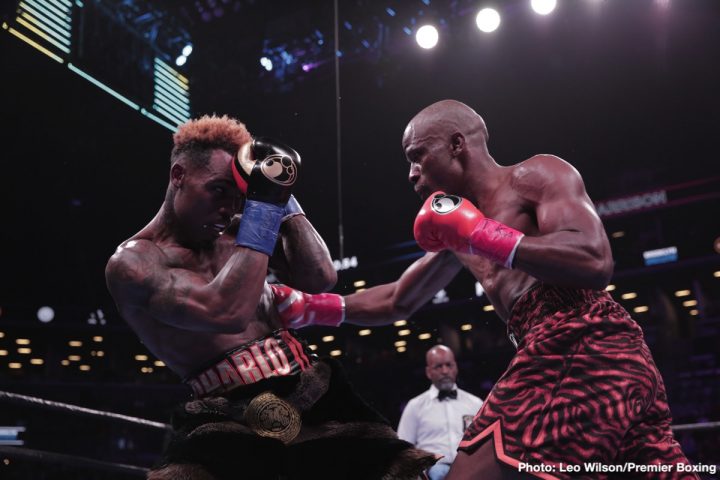 By Sean Jones: Terence Crawford was impressed with what he saw of Tony Harrison (28-2, 21 KOs) last Saturday night with him pulling off an upset of WBC junior middleweight champion Jermell Charlo (31-1, 15 KOs) at the Barclays Center in Brooklyn, New York. Harrison, 28, out-boxed the previously unbeaten Charlo to win a 12 round unanimous decision by the scores 115-113, 115-113 and 116-112. Boxing News 24 had Harrison winning by a clear 115-113 decision.

Charlo gave it his best shot, but he wasn’t good enough. It’s back to the drawing board for Charlo. If he can learn from the loss, then he might beat Harrison in the rematch. If not, then Charlo will suffer his second straight loss to Harrison, and his career will star to sink into the abyss like so many other fighters that fail to learn from their defeats. Just listening to the way that Charlo seemed to be in denial about his loss after the fight, it seems likely that he’s going to repeat his loss in the rematch. Coming events cast their shadows before.

Crawford was courageous in complimenting Harrison during the fight last Saturday. Crawford was heavily criticized by Charlo’s boxing fans at the time. Afterwards, Crawford had to let the fans know that he told them all.

“This dude Harrison is boxing great. They hating on him. He winning some of these rounds,” Crawford said on his Twitter. “Told y’all.”

This writer agrees with Crawford. Harrison won the fight, and deserved to have his hand raised. Charlo fought like he had sense at all in his head. It was like he was born yesterday. For a fighter that is hyped as much as Charlo and his twin brother Jermall Charlo are, they both looked awful last Saturday against their respective opponents. Both deserved to lose, although only Jermell wound up losing. What they should do is have rematches with both fighters facing the same opponents. Jermall needs to fight Matt Korobov again, and show that he can actually beat him instead of getting a controversial 12 round decision. Jermell needs to try and avenge his loss to Harrison, and he might not be capable of doing that. Harrison looks like the more finished of the two fighters skills-wise. That’s not going to change in four months, which is when Jermell wants his rematch.

Crawford wasn’t hating Charlo for pointing out the obvious last Saturday night. Charlo simply wasn’t good enough to defeat the superior boxer Harrison. This was a fight between two fighters that different ideas. Charlo thought he was a knockout artist, and he was going to stop Harrison the way that Jarrett Hurd and Willie Nelson had previously did. Charlo found out that it’s not easy to stop Harrison, especially when you’re throwing single shots, and you’re afraid to get hit back. Hurd was willing to walk through everything Harrison hit him with in order to wear him down to get the stoppage. Charlo wasn’t willing to make that kind of sacrifice, and it’s understandable why. Harrison might have knocked Charlo out if he tried to follow Hurd’s blueprint in how to beat him. You’ve got to possess a good chin to walk down a fighter with Harrison’s punching power and offensive skills. Harrison has a 70 percent KO percentage. It’s not by accident that Harrison has knocked out 70% of his opponents.

Harrison fought a smart fight against Charlo by using his jab, and well placed shots to win the rounds. Harrison wasn’t trying to knock Charlo out with every shot he threw. That was Charlo’s mistake. He thought he was going to KO Harrison the way that he did Erickson Lubin, and he fell in love with his power. Instead of boxing smart, Charlo kept loading up on his single shots. In the meantime, Harrison was banking the rounds by jabbing him, putting his shots together, and not making mistakes. It was a beautiful display of boxing by the Detroit native Harrison. He definitely showed that he had the better ring IQ compared to Charlo.

For the disgruntled fans that felt that Charlo deserved the win, all three of the judges had Harrison winning the fight. This wasn’t a situation where just two of the judges thought Harrison won. It was all three. When you have all the judges agreeing that a fighter won, that tells you something. It wasn’t even a split decision. It clearly wasn’t a robbery like some boxing fans think it was. It was a decisive victory for Harrison. There was no controversy at all in the results of that fight. The only thing you can say is Charlo and his trainer failed at making the adjustments they needed to make when the fight was still winnable. Charlo wasn’t willing to make the ultimate sacrifice to fight the way Jarrett Hurd and Willie Nelson had fought in walking Harrison down to get the stoppage. That’s not surprising though. Charlo has never liked to get hit. If you look at Charlo’s performances against Vanes Martirosyan and Gabriel Rosado, he shied away from getting in the trenches and fighting those guys the way he needed to for him to impress. The scores for both fights were ridiculously bad. Martirosyan was arguably robbed by the judges in the view of a lot of boxing fans, and Rosado fought Charlo close enough for the scores to be closer than they were.

Harrison approached the fight in a different way than Charlo did. That much is obvious. Charlo’s recent knockout wins over Charles Hatley, Erickson Lubin, John Jackson and Joachim Alcine seems to have gone to his head, making him think he’s a better puncher than he actually is. Charlo should have realized from his previous fight against Austin Trout last June that he’s not the knockout puncher that Hurd is. Hurd stopped Trout in the 10th round last year in October 2017. Trout had never been stopped before in his career, and he’d been in with the likes of Saul Canelo Alvarez and Erislandy Lara. Charlo beat Trout by a 12 round majority decision, and it wasn’t nearly as an impressive performance as what we saw from Hurd in wearing Austin down and forcing him to quit.

“They took that fight from me,” said Charlo afterwards in sounding like an extremely poor loser. “I was pressing the action. He didn’t win that fight.”

Jermell got a boxing lesson last Saturday by Harrison. He can learn from his loss, and try and come better in the rematch or he can be a poor sport and continue complaining about his loss and wind losing a second time. As long Jermell continues to fight the way he did last Saturday, he’s going to end up losing to Harrison no matter how many times the two face each other.

The loss for Charlo showed clearly that he’s not ready to fight the likes of Jarrett Hurd. The Harrison fight showed that Charlo isn’t even ready to fight Erislandy Lara or WBO champion Jaime Munguia. Both of those fighters beat Charlo if the fights take place right now with him fighting the way he did last Saturday night. Hurd is levels above Charlo right now. You can argue that Hurd beats both Charlo brothers right now based on their performances last weekend.

Harrison looks like he’s got a good future. As long as he keeps fighting smart, he beats Charlo in the rematch, and then he can be the one that faces Hurd in the second half of 2019, unless Jermall wants to come back down to 154 to try and avenge his brother’s loss. Harrison vs. Jermall would be interesting to watch.