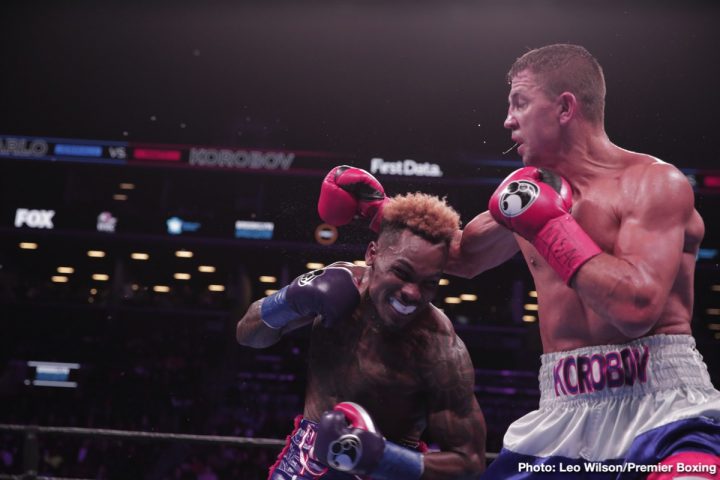 By Mike Smith: Last Saturday’s Premier Boxing Champions triple-header card on FOX headlined by Jermall Charlo vs. Matt Korbov from the Barclays Center in Brooklyn, New York, averaged 1.69 million viewers, according to Nielsen Media Research. The card was a big success even though Jermall Charlo and his twin brother Jermell failed to impress in their two fights on the card.

Jermell lost his WBC 154 pound title to Tony Harrison by a 12 round unanimous decision in the co-feature bout on the card.

The Charlo-Korobov card brought in better ratings than the past five PBC on FOX cards.

Had the Charlo brothers been matched against bigger names, the card would have likely done far better far more viewers than the 1.69 million that tuned in to see it. Korobov, 35, is not well known with the casual boxing fans. He had been largely inactive in recent years, which made it all the more bad when he gave interim World Boxing Council middleweight champion Jermall Charlo (28-0, 21 KOs) a devil of a time in the main event. A lot of the fans that saw the fight felt that Korobov had done enough to earn the win over Jermall.

The judges saw it much differently than the fans though in giving Charlo a 12 round unanimous decision by the scores 116-112, 119-108 and 116-112. The judge that scored it for Charlo by a 119-108 was ripped apart by the boxing public afterwards for turning in such a one-sided scorecards for a fight that appeared to go Korobov’s way.

How could a judge see the fight so differently from the way the boxing public viewed it? The outcome went Charlo’s way, but it didn’t help his standing with the fans. He did not impress the way that he needed to for him to be seen as the winner or the next star in the middleweight division, which some fans had previously labeled him. Charlo came out of the fight in a much lower standing than he went into it.

Both Charlo brothers need to redeem themselves somehow. Jermell will get his chance sooner than Jermall, as he plans on fighting Harrison in a rematch in his next fight in four months to try and win back his WBC junior middleweight title. Jermall will likely move on, and not fight Korobov again. At he post-fight press conference, Jermall called out WBC middleweight champion Saul Canelo Alvarez and former champion Gennady Golovkin. Charlo be waiting a long time before either of those two look his way for a fight.

Heavyweight contender Dominic Breazeale (20-1, 18 KOs) put on the best performance on the televised portion of the Premier Boxing Champions card on FOX in defeating Carlos Negron (20-2, 16 KOs) by a 9th round knockout. Breazeale, 33, looked sharp in battering the 6’6″ Negron before stopping him in round nine.