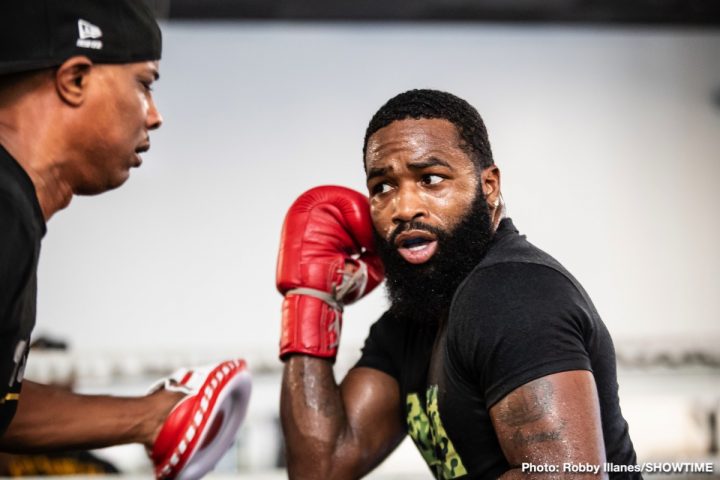 By Jim Dower: With a big fight scheduled for January 19 against WBA World welterweight champion Manny Pacquiao, former four division world champion Adrien ‘The Problem’ Broner was arrested several days before Christmas due to him failing to appear for a court case earlier in December, according to ESPN.

Broner is currently training in Florida to get ready for his fight against the 40-year-old Pacquiao on SHOWTIME PPV on January 19 at the MGM Grand in Las Vegas, Nevada. It remains to be seen whether the arrest will have any impact on Broner’s performance against Pacquiao. Broner is already an underdog in this fight. If he doesn’t have his full concentration on the fight, then it could hurt his chances of winning.

After Broner failed to appear for his court case this month, an arrest warrant was issued.

Broner has problems inside and outside of the ring in the last couple of years. This is just one more thing for the struggling AB. It was Broner’s good luck recently that Pacquiao inked a contract with his manager Al Haymon. Pacquiao could have been matched up with anyone in Haymon’s stable of fighters, but Broner was the one that was selected despite him coming up empty in his recent last two fights against Jessie Vargas and Mikey Garcia. Broner failed to win either of those fights in getting a 12 round draw against Vargas last April, and losing a 12 round unanimous decision to Mikey last year in July.

Pacquiao vs. Broner will be televised on SHOWTIME PPV. There’s a chance for Broner to make some good money from that fight if it pulls in a lot of PPV buys. The buzz for the Pacquiao vs. Broner fight has been underwhelming on social media. The boxing fans aren’t thrilled about the Pacquiao-Broner fight, which isn’t surprising given Adrien’s lack of success in his last two fights. Broner has not looked good in four out of his last six fights against Mikey Garcia, Shawn Porter, Jessie Vargas, and Adrian Granados.

Broner being arrested again likely won’t have a positive or negative impact on PPV sales for the Pacquiao fight on January 19. It’s possible that the arrest will go under the radar with the casual boxing fans with them not hearing about it. The main thing is for Broner to make it to the fight without it being canceled. There appears to danger of the fight being canceled due to Broner’s latest legal issues.

You have to wonder if Broner is dreading his fight against Pacquiao. This is a match where Broner has a good chance of being knocked out for the first time in his career. Hopefully Broner’s life doesn’t spin out of control before he even makes it to the fight with Pacquiao. On one sense, Broner would avoid a potentially bad ending if his legal problems keep him from fighting, but he would miss out on a nice payday.