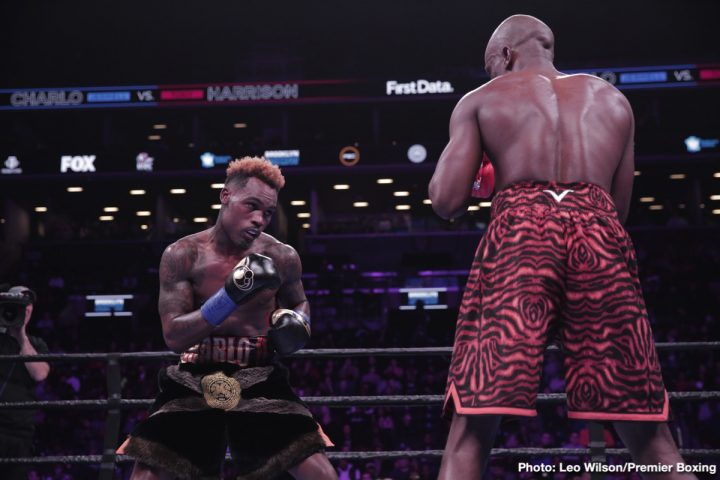 By Allan Fox: Commentator/trainer Teddy Atlas agrees with the decision the judges handed down in giving Tony Harrison (28-2, 21 KOs) a 12 round unanimous decision win over rising star WBC junior middleweight champion Jermell Charlo (31-0, 15 KOs) at the Barclays Center in Brooklyn, New York. Atlas is the first to admit that his comments on the outcome of the Charlo vs. Harrison fight won’t be favorable with the boxing public, as many of them thought Jermell deserved the victory.

Premier Boxing Champions commentators had Charlo winning the fight over the 28-year-old Harrison. The judges scored the fight 115-113, 115-112 and 116-112. They did the best they could in making sense of a contest in which the rounds were close, with both guys having their moment. Charlo got off to a slow start, and never got his offense in gear to where it was humming like it had in the past. Harrison had a lot to do with that though. His defense was on point the entire fight.

It was Harrison’s boxing ability that was the deciding factor in the scoring of the fight. Harrison wasn’t trying to load up with the same amount of punching power as Charlo was, as he knew going in that his best chance of winning was to box the popular Charlo.

Atlas said this on his Instagram in summing his thoughts on Harrison’s big upset win over Charlo:

“Over the years I’ve often used my podium at ESPN to knock the crap out of judges for being either incompetent or corrupt, and chasing you guys away with bad decisions in the sport that you guys love, and I love. I think I need to be consistent. I think I need to do the right thing right here. I’ve never done this before in sending a message out on Instagram. But I think need to go to the defense of the judges that said Tony Harrison beat Charlo the other night in this fight. I know it’s not going to be favorable. I know it’s not going to be popular, but I think it’s the right thing…if you look at the criteria of boxing. What is it? I know it’s subjective, but it is supposed to be? Who lands the cleaner punches. Who controls the fight. Turn the sound off. Look at it. If they’re right, give them credit for being right,” Atlas said about the three judges that worked the Charlo vs. Harrison fight.

The two fighters are going to meet in a rematch in the first half of 2019. If Charlo is the better man, he’ll make adjustments and fix the mistakes he made last Saturday night against Harrison. Charlo has the talent to win, but he’s got to get his head together and stop fighting like a one-dimensional slugger. It looked like Charlo came into the fight with one idea, and that was to score a highlight reel knockout of Harrison. When that failed to happen, Charlo had no Plan-B. He simply continued to load up looking to KO Harrison any way he could.

Jermell failed to make adjustments in the fight, and he ended up getting frustrated by Harrison’s boxing ability. In the second half of the fight, Charlo was swinging for the fences, trying to land that one big punch to KO Harrison. It didn’t work.

Charlo was talking conspiracy theories after the fight at the post-fight news conference, saying that the judges were biased. The judges appeared to do a better job of scoring the Charlo vs. Harrison fight than they did with the main event between interim WBC middleweight champion Jermall Charlo vs. Matt Korobov. That’s the fight that had the strange scoring, not the Charlo-Harrison fight. Korobov looked like he a number on Jermall in out-boxing him through 12 rounds, but he found himself on the receiving end of the scores 116-112, 119-108 and 116-112. For the boxing fans that saw that fight, they know those scores came from outer space. They made no sense for the fight that took place. Even if they were reversed, they still wouldn’t have made sense.

“I’m not a ref. I’m not a judge,” Harrison said to Fighthype after his win over Jermell Charlo. “Some of the rounds, I thought I gave away, because I let him do a little bit too much. Other than that, I felt in total control. I was laughing at him. I was smiling at him. I got caught with a good shot one time, but I caught him with a good shot too. I didn’t hop on him. A couple of good hits. I was countering that man. That man was loading up with everything, and I was countering that man. I was boom, just countering. Come on, man. I wasn’t even breathing hard. I’m going to go to the club. Not a scratch on me. I’m clean. That’s how the champions are supposed to look like. Defense. Floyd Mayweather wins because of defense, because he don’t get touched. That’s what I did tonight. I played matador. I was the matador, and he was the bull,” Harrison said.

Harrison, 28, created the blueprint in how to beat the young 6’0″ Charlo. The way Harrison beat him was to box, and not play Charlo’s game by going to war with him and letting him land his counter shots. It was the same thing with Jermall Charlo. His opponent Matt Korobov chose to box him, and not get into a slugging match with him that would open up opportunities for him to land big counter shots.

What’s surprising is that Harrison, a big underdog, was given the decision win over Charlo, because it’s increasingly rare in big fights for the B-side fighter to get a decision win over the A-side fighter in boxing. You’ve got to give the judges credit for getting the decision right, and not just giving it to the guy with the hype behind him in Charlo. The judges in the main event are the ones that dropped the ball in giving Jermall Charlo a decision win that he didn’t deserve against Matt Korobov.

The way that Harrison neutralized Charlo’s punching power with his jab, movement, and counter punching was a thing of beauty. Harrison had Charlo tied in knots, not what he was doing, and just looking to land a big home run punch. Charlo went completely primitive inside the ring against a boxer with a 21st century fighting style. You can’t fight a primitive style against a new age fighter like Harrison. You’ve got to box him, but Charlo was having none of it. He wanted his knockout, and that’s the only thing that he was trying to do all night long.

Harrison had obviously trained a lot of fighters with a similar style as Charlo in his hometown of Detroit, and he was fully ready for everything that he was doing. The jab from Harrison was great, and the way that he was getting the better of Charlo in the exchanges. He was making Charlo pay each time he would look to load up with a big shot.

Jermall Charlo: ‘Now Canelo and GGG are going to want to fight me’ »