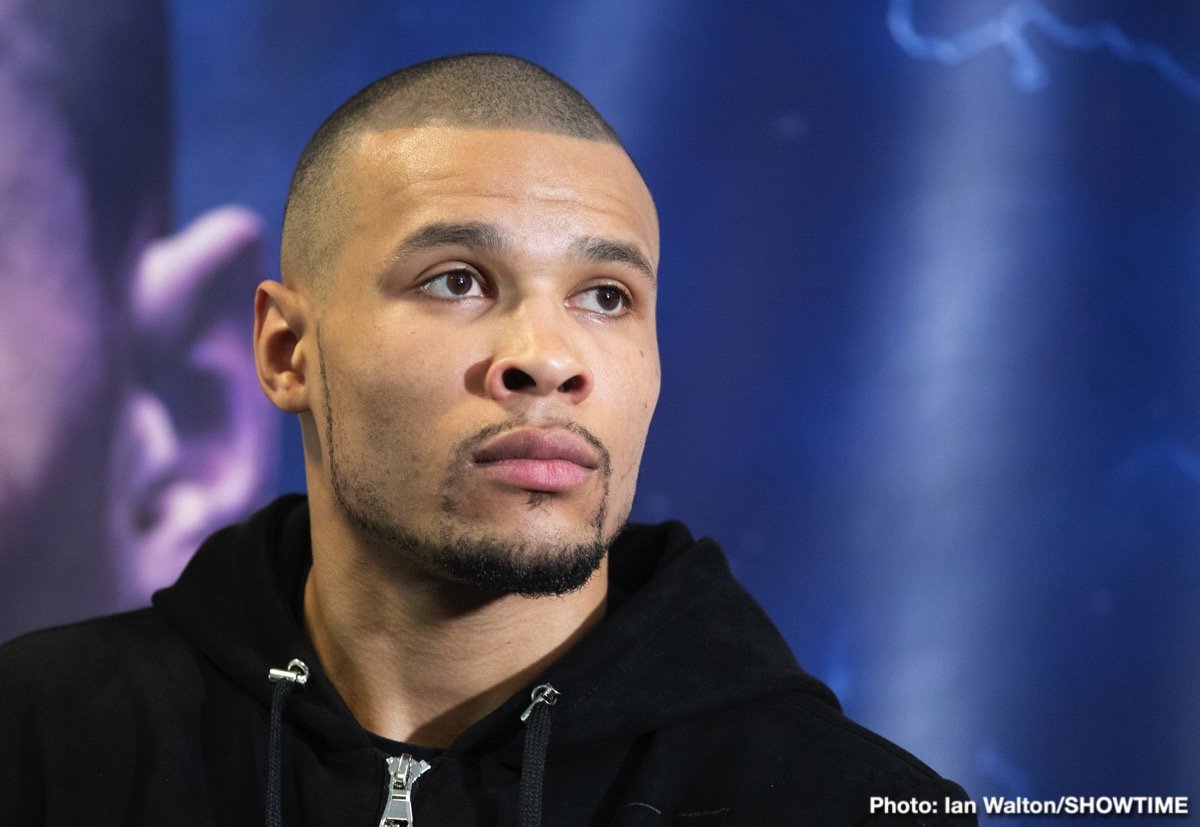 By Tim Royner: A bitter sounding Matchroom promoter Eddie Hearn isn’t pleased with the decision making by middleweight Chris Eubank Jr. in facing 2008 Russian Olympian Matt Korobov on December 7 at the Barclays Center in Brooklyn, New York. Hearn feels that this is a bad match-up for the 30-year-old Eubank Jr. (28-2, 21 KOs), because he might lose to the 36-year-old southpaw Korobov (28-2-1, 14 KOs) or look bad in winning.

Hearn thinks Eubank Jr. would be better off facing one of his Matchroom stable fighters like Callum Smith or Billy Joe Saunders. Those are better fights for Eubank Jr. than taking on Korobov, who might beat him. The problem is that Eubank’s chances of beating Callum and Saunders is arguably a lot worse than for him to beat 36-year-old Korobov. Hearn is speaking in a self-serving manner in complaining about Eubank Jr. fighting Korobov, but he’s clearly upset because he can’t use him as an opponent for his own guys Callum and Saunders.

Why would Eubank Jr. feel the need to help Hearn out by agreeing to fight his bigger fighters? With all the bad blood that exists between Eubank Jr. and Hearn, it makes no sense at all for him to think he should be looking to fight his guys. Hearn arguably burned his bridges with Eubank Jr. when he switched him out in place of Kell Brook for the Gennadiy Golovkin fight in 2016. It’s interesting that Hearn doesn’t seem to be able to grasp why Eubank Jr. wouldn’t be looking to negotiate with him.  That was supposed to be Eubank’s fight. Instead, Hearn gave the fight to Brook.

“Korobov is the worst possible style of opponent that they could have chosen,” said Hearn about Eubank Jr. in his decision to face Matt Korobov on December 7. “We got Callum Smith, we got Billy Joe Saunders, and we got all these domestic fights that he can take.

“He’s fighting a guy [Korobov] that nobody really wants to fight, and no one has really heard of. He’s probably going to get beat, because it’s the worst possible style in the world for him. Who is advising Chris Eubank Jr? I mean, it’s madness. He’s not even going to be given any credit for winning that fight outside of the boxing community,” said Hearn.

It would likely be impossible for Eubank Jr. to negotiate a fight with Billy Joe Saunders or Callum Smith. The Smith would be a bad idea, because that guy is basically a light heavyweight. Eubank Jr. would be too small against the 6’3″ Callum, and it would probably end badly. Hearn would come out of the fight pleased, but it wouldn’t be a great deal for Eubank Jr.

If Hearn wants to make fights for Callum, he needs to persuade him to fight Artur Beterbiev or Dmitry Bivol. There’s no excuse for Hearn NOT to make those fights, because Smith bigger than both of those guys. The only excuse you can give Hearn for not wanting to make those fights is Callum would lose to Beterbiev and Bivol.  Hearn obviously will never let Callum fight either of those guys because they’re better than him.

Eubank Jr. has a good chance of beating Korobov, as long as he fights hard for 12 rounds. Korobov gasses out in the second half of his fights, and he’ll likely have a problem with Eubank Jr’s better engine.

“I’m not saying he can’t win, but why would you gamble against a guy that has nothing for you when you have all the championship fights on Sky Box Office?” said Hearn. “It’s madness. I’m not saying Matt Korobov is an unbelievable fighter, but he can fight. He’s got good skills. He’s got all the things that are wrong for Eubank, and it’s a shame.

“I think Eubank Jr. will either win narrowly in a bad fight or lose, and then we’ve lost out on all those domestic fights. I talked to PBC and told them we can make those fights. We could have made the Billy Joe Saunders [vs. Eubank Jr.] fight this year, and then we didn’t hear back from them. I’d just like to see him get a win, and then make those fights in the spring,” said Hearn.

It’s pretty easy to see that Hearn needs Eubank Jr. more than he needs him. Hearn is promoting Saunders and Callum, and not delivering big fights for them. Callum has only had one big fight during his seven-year pro career, and that was against George Groves in the World Boxing Super Series tournament.

If not for Callum volunteering to take part in the WBSS tourney, he likely would have never fought Groves. Callum would have absolutely nothing to show for his career. Since that tournament has ended, Callum has fought just once against Hassan N’Dam N’Jikam. Now Callum is about to defend against John Ryder on November 23 at the Echo Arena in Liverpool, That’s another low level fight for Callum.  For some reason, Hearn isn’t able to come through with the big fights for Callum. So if Eubank Jr were to agree to fight Callum, he would be doing Hearn a favor.

As for Saunders, he’s never fought anyone good other than Eubank Jr. in 2014. In Saunders’ last fight he beat little known Shefat Isufi by a dull 12 round unanimous decision last May to capture the vacant WBO super middleweight title. Saunders is next making his first defense of his WBO title against fringe level opponent Marcelo Esteban Coceres on November 9 on the UNDERCARD of Logan Paul vs. KSI at the Staples Center in Los Angeles, California. It looks bad that Saunders is fighting on the undercard of a celebrity match between two Youtube personalities. Callum is a waste of time as well for Eubank Jr. because Hearn has done nothing to increase his popularity.

Korobov has had rotten luck in his last two fights in the United States against Immanuwel Aleem and Jermall Charlo. Although Korobov appeared to beat both guys, he wasn’t given the wins. Charlo shockingly beat Korobov by a set of embarrassingly bad scores in a 12 round unanimous decision in Brooklyn, New York. It didn’t matter that the judges scored the fight for Charlo.

The fans ignored the judges, and saw Korobov as the winner. In Korobov’s last fight, he held to a controversial 10 round draw against Immanuwel Aleem in fighting him in his hometown. Once again, Korobov appeared to win the fight, but the judges instead scored it a draw. One can argue the only true loss on Korobov’s 11-year professional resume is his 6th round knockout defeat by Andy Lee in December 2014.