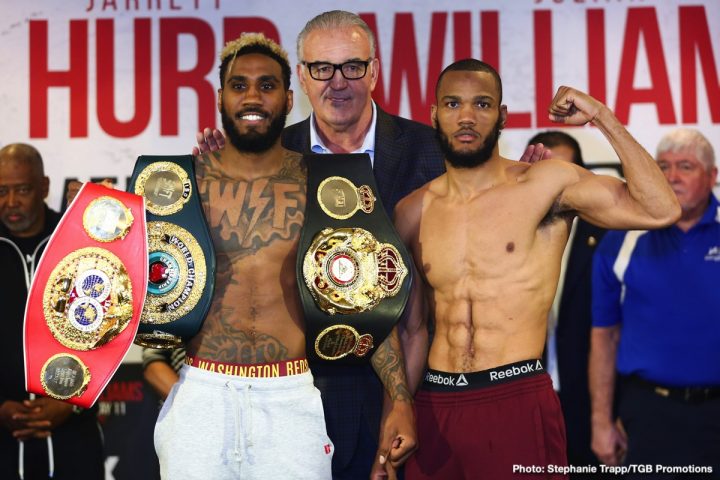 By Dan Ambrose: IBF/WBA junior middleweight champion Jarrett Hurd and his opponent challenger Julian ‘J-Rock’ Williams both weighed in at 153.8 pounds on Friday at their weigh-in for their fight this Saturday night on Premier Boxing Champions on FOX and Fox Deportes at the EagleBank Arena, in Fairfax, Virginia. 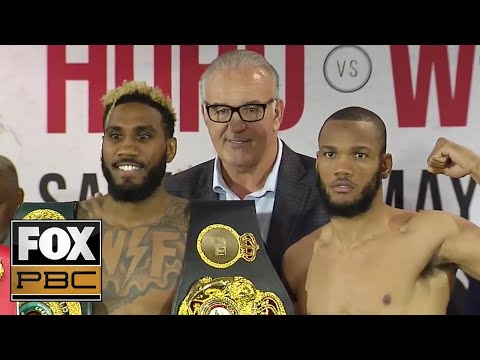 Jarrett, 28, needs a win in this fight against J-Rock Williams to stay in the running to face the winner of next months’s June 23rd fight between WBC junior middleweight champion Tony Harrison and former 154-pound champion Jermell Charlo. There will be three world titles on the line in a fight between Hurd and the Harrison-Charlo 2 winner.

Williams, 5’10”, looked intimidated by the 6’1″ Hurd during their face off after weigh-in on Friday. This wasn’t surprising, because Williams has looked a little out of sorts each time he’s had to face off with the bigger, stronger Hurd in their previous news conferences during the build up to the fight. It’s a big step up in class for Williams from the guys that he’s been facing lately. The last time Williams stepped up against a good fighter was two and a half years ago when he was knocked out in the fifth round by former International Boxing Federation junior middleweight champion Jermall Charlo on December 10, 2016 at the USC Galen Center, in Los Angeles, California. J-Rock Williams was knocked down three times by Charlo in getting dropped once in round 2, and two more times in round 5 before the match was stopped by referee Wayne Hedgpeth at 2:06 of round five. Since that disappointing loss, Williams has turned things around with his career in winning his last four fights in beating Francisco Javier Castro (28-10, 23 KOs), Nathaniel Gallimore (20-3-1, 17 KOs), Ishe Smith (29-11, 12 KOs) and Nathaniel Gallimore (14-3-1, 9 KOs).

Hurd is coming off of a fourth round knockout win over Jason Welborn (24-7, 7 KOs) on December 1 last year at the Staples Center in Los Angeles, California. Hurd was seemingly taking it easy on Welborn in the first three rounds. But that all changed in the fourth, when Hurd seemed to get annoyed at Welborn after he came out firing with full power trying to get a knockout. The 6’1″ Hurd suddenly turned up the power on Welborn and dropped him with a hard body shot. Welborn was too hurt to get up, and the fight was subsequently halted by referee Lou Moret. 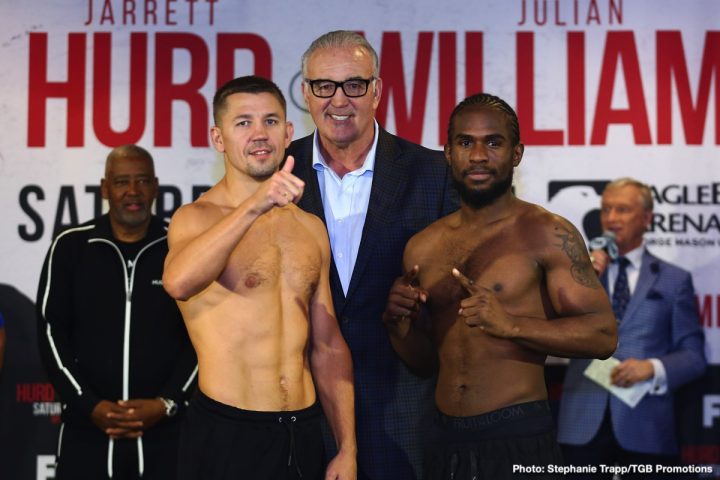 The southpaw Korobov, 36, lost his last fight to interim World Boxing Council middleweight champion Jermall Charlo by a questionable 12 round unanimous decision on December 22 at the Barclays Center in Brooklyn, New York. The judges didn’t give Korobov much credit for him landing a lot of excellent shots with his left hand. The scoring for the fight didn’t match the actual fight that took place inside the ring that night. Korobov appeared to control the first 10 rounds of the fight. Charlo came on strong in the 11th and 12th, but he appeared to have lost the fight. The judges scored it 116-112, 118-109 and 116-112. The 118-109 score was especially bad. Boxing News 24 had Korobov winning the fight by an 118-109 score. Charlo was completely outclassed. It’s interesting that Charlo chose not to give Korobov a rematch. It’s embarrassing actually. Instead of fighting Korobov again, Charlo (28-0, 21 KOs) is facing Brandon Adams (21-2, 13 KOs) on June 29 on SHOWTIME from the NRG Arena, in Houston, Texas.

Aleem, 25, is looking to win his second consecutive fight since being stopped in the third round by southpaw Hugo Centeno Jr. (27-2, 14 KOs) in August 2017. Aleem looked completely lost against Centeno Jr., who was catching him with straight left hands and sweeping right hooks. Aleem didn’t know how to track Centeno’s wide right hooks, as they were catching him off guard repeatedly. Aleem came back from that loss to defeat journeyman Juan De Angel (21-10, 19 KOs) by a sixth round stoppage last year on May 19. For some reason, Aleem hasn’t fought since then, and he’ll be coming off of a 12 month layoff when he steps inside the ring against Korobov on Saturday night. Aleem is going to need to do a much better job against Korobov’s southpaw stance than he did in his fight with Centeno Jr. if he wants to win. The thing is, the 2008 Russian Olympian Korobov is a better fighter than Centeno Jr., and he’s a bigger puncher as well. Aleem won’t last long against Korobov if he can get him out of there at some point.

The major flaw in Korobov’s game is his stamina. He tends to wear down after six rounds, and he becomes beatable. If Aleem isn’t able to jump on Korobov early the way that southpaw Andy Lee did in stopping him in the sixth round in December 2014, then the next best thing he can do is to try and get him out of there in the later rounds. 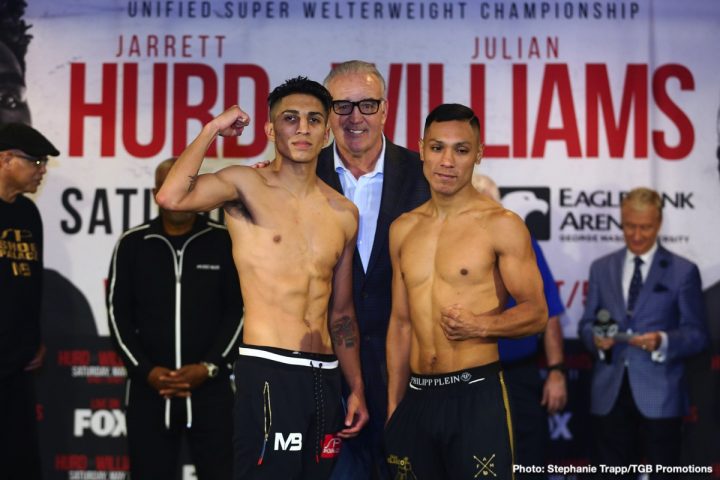 Barrios, 23, is a big puncher with a lot of talent. We don’t know how good he is unfortunately, because he’s still never faced anyone of note during his career. With Regis Prograis now holding the WBA 140-pound title, Barrios is going to have problems when he’s forced to take him out. Prograis is looking for hard to beat.

The 32-year-old Argentinean Velasco was stopped in the 8th round by Prograis on July 14 last year in New Orleans. Prograis threw mostly body shots in dropping Velasco in rounds five, seven and eight.

Berchelt vs. Vargas and Navarrete vs. Dogboe – Official Weights »