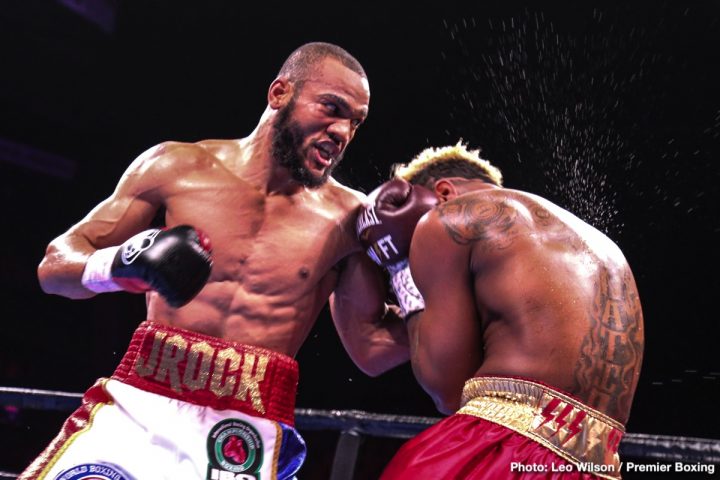 It was a good fight. Williams looked too strong for Hurd, who appeared to be depleted from making weight. Hurd needs to think about moving up to 160 or possibly even 168. He looks way too big for the 154 pound weight class, and it finally caught up to him tonight. Williams was beating Hurd to the punch all night long.

William dropped Hurd in the 2nd round late. Hurd was badly hurt, and he was lucky the knockdown came late in the round.

If this had been a closer fight, Hurd would do well to try and get a rematch with Williams, but it wasn’t close enough for there to be a second fight. If Hurd wants to mess up his career, he can go ahead and fight Williams again, but he needs to move up to 160 already. If that’s not enough weight for him, then super middleweight would be ideal. Tonight, Hurd looked like a 168 pounder inside the ring with Williams.

With the victory, J’Rock can go after the winner of the June 23 fight between WBC junior middleweight champion Tony Harrison and Jermell Charlo. A fight between J-Rock and the Harrison-Charlo winner will have three of the four 154-pound titles on the line with the IBF, WBA and WBC straps. The WBO champion Jaime Munguia, but he might not be staying at 154 for too much longer.

Barrios, 23, landed a hard right to the body of the 32-year-old Velasco in the second round. The shot sent the Argentinian down on the canvas. The fight was then stopped by referee Waybe Spinola. The official time of the stoppage was at 1:16 of round two.

Velasco was stopped with a body shot in his previous fight a year ago by Regis Prograis in July 2018. Barrios did a better job of halting Velasco, but that doesn’t mean he’s going to beat Prograis. Barrios is a good fighter, but he’s clearly not ready for a fighter like Prograis right now. But with Barrios’ #1 ranking with the World Boxing Association, he’s going to get a chance to prove the doubters wrong in the near future. Barrios is a good fighter, but he’s needs more time before he takes on lions like Prograis, 29, is in the prime of his career right now and looking unbeatable at the moment. Prograis is still competing in the World Boxing Super Series 140-pound tournament. Once that tournament is over, Barrios might get his chance to face Prograis.

The judges initially scored the fight for Korobov as a 10 round majority decision, but moments later, they changed the results to a 10 round draw. The scores were 97-93 for Korobov, 95-95 and 95-95. Boxing News 24 scored it for the 36-year-old Korobov 97-93. He clearly won the fight. The boxing fans at ringside weren’t happy with the results of the fight, as they booed loudly in letting the judges know that they felt that Aleem had done enough to deserve the victory. After the judges changed the scoring to a draw, the fans were pleased. It sure didn’t look like Aleem did enough to get a draw, but that’s how the judges saw it.

The 2008 Russian Olympian Korobov had the 25-year-old Aleem badly hurt in the sixth round after tagging him with a big left uppercut. Korobov didn’t try and finish Aleem off for some reason. It looked as if Korobov was afraid to empty his gas tank due to his stamina issues. As it turned out, Korobov gassed out anyway from the last three rounds from the eighth to the tenth, and was fortunate that he didn’t get knocked out. The southpaw Korobov’s poor stamina has been a problem that he’s always had as a pro. He was an excellent amateur fighting three and four fights, but a a pro, he tends to face badly when he’s asked to fight more than six rounds.

Aleem didn’t possess the punching power or the talent to hang with Korobov in the first seven rounds of the fight. You can argue that Korobov swept those rounds. But from round eight on, Korobov was too tired to put up a fight, and Aleem was able to take those last three.

Korobov, 36, is going to need to be a lot more aggressive in future fights if he wants to be able to beat the elite in the middleweight division. Since he knows by now that he have a great engine, he needs to make sure that he goes after his opponents if he’s able to hurt them, because if he let’s them off the hook, like he did with Aleem in the sixth round, they could come back and either stop him or beat him on points.

In Korobov’s last fight, he dominated interim WBC middleweight champion Jermall Charlo in the first eight rounds of the contest in their match on December 22 in Brooklyn, New York. In the in the last four rounds, Korobov was fighting on fumes, and Jermall was able to rally to come back and defeat him by a 1 round decision.

Korobov is going to have to figure out how to fix his stamina problems, considering he should have been able to trounce Aleem tonight if he hadn’t run out of gas halfway through the fight. Aleem is someone that Korobov should have been able to destroy if he’d had his conditioning where it should be Even with Korobov’s poor gas tank, he would have likely knocked Aleem out if he’d stepped it up after hurting him in the sixth round tonight.


« Harold Lederman passes away at 79