Jessie Vargas: I don’t want excuses from Adrien Broner after the fight 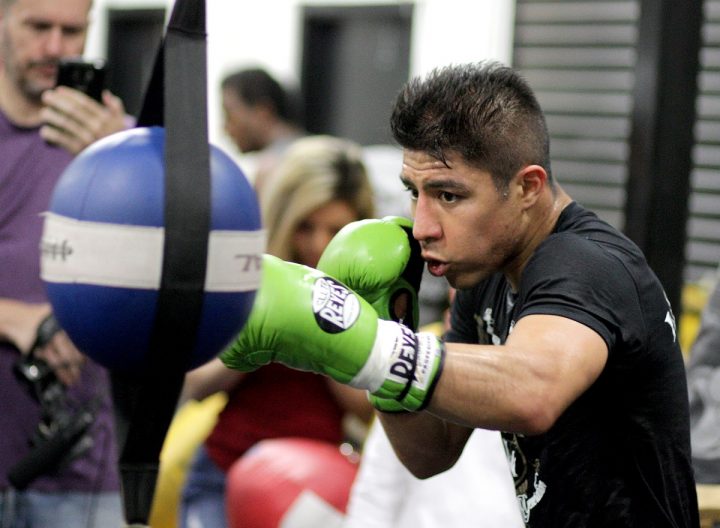 By Allan Fox: Jessie Vargas (28-2, 10 KOs) doesn’t want to hear the excuses from former 4 division world champion Adrien ‘The Problem’ Broner (33-3, 24 KOs if things don’t work out well for him after their fight in a little over a week from now on April 21 on Showtime on Brooklyn Brook at the Barclays Center in New York.

Broner recently made excuses after his loss to Mikey Garcia, and then changing out his coach Mike Stafford in favor of Kevin Cunningham. Vargas, 28, doesn’t think Broner’s new coach will change anything for him on April 21. He’s still going to lose the fight and wind up having to deal with another defeat on his resume.

Broner lost his last fight to former three division world champion Mikey Garcia by a 12 round uniramous decision in July of last year, and he’s been out of the ring for the last nine months doing nothing. It looks like Broner is in excellent shape for the Vargas fight unlike his last match against Garcia in which he looked like he was weight drained. This time, Broner looks like he didn’t use training camp as a fat farm to take off a ton of weight.

Whether that helps Broner or not is still unclear, because he was in good shape for his fights with Shawn Porter, Adrian Granados and Marcos Maidana and he still had problems. Broner was given a 10 round decision win over Granados, but many boxing fans thought he deserved a big fat ‘W’ for that fight. That was a contest that took place in Broner’s hometown of Cincinnati, Ohio.

“If Broner feels that he’s going to perform better with coach Kevin Cunningham, then good for him,” Vargas said. ”I don’t want any excuses after this. I’m planning on having my hand-raised in victory.”

The former 2 division world champion Vargas is coming into the fight with Broner off the back of a 10 round unanimous decision win over journeyman Aaron Herrera last December. Vargas had been out of the ring for 13 months before that resting up after his loss to Manny Pacquiao in November 2016. Things weren’t going to well for Vargas back then. He’d been beaten soundly by Tim Bradley by a 12 round unanimous decision the previous year in June 2015.

Vargas’s weakness is fighters with fast hands and good counter punching ability. When Vargas is matched up against slower guys like Sadam Ali, Antonio DeMarco and Aaron Herrera, he does really well. The good news for Vargas is he’s facing a slow, flat-footed guy in Broner on April 21, and that gives him an excellent chance of winning this fight.

“If he comes to fight me on the inside then that’s going to feed right into my game plan,” Vargas said. ”Bring it on. If he wants to come and fight, then we’ll pick him apart bit by bit. We’re ready for any type of fight. Once he feels my power, he’s going to back up and choose a better route.”

Broner is probably going to throw his single pot shots the way he normally does, and hope that Vargas will be stationary against him. Broner was gun-shy in his last fight against Garcia, because he was getting hit with hard shots that he wasn’t comfortable in taking. That gave Mikey the ability to take control of the fight and dominate the action. Broner never made any adjustments to deal with Garcia’s superior punching power and hand speed. Broner just played it safe until the second half of the contest when he finally seemed to realize how bad things were for him. That’s when he started to attack a little to try and rally. Unfortunately for Broner, it was too late in the fight for him to make a comeback.

Vargas is trained by former world champion Mike “The Bodysnatcher” McCallum. During his excellent pro career, McCallum was known for his ability to punch to the body. If he can teach some of what he knows to Vargas, then it could be a real problem for Broner on April 21. Broner hasn’t faced too many body punchers during his career. Vargas might be able to expose a flaw in Broner’s game if he can attack his body with his big power shots.

“Coach McCallum is a tremendous trainer who’s been able to teach me some different techniques,” Vargas said. ”Obviously he’s known as ‘The Bodysnatcher’, so we’ve worked on body shots, but he also knew how to maintain his distance and he emphasizes the mental game. He tells me how he saw every situation during a fight.”

Vargas has always been technical fighter. If he’s learned new stuff since being trained by McCallum, it could be difficult for Broner.

It won’t be the end for Broner if he loses the fight to Vargas, because this contest is taking place in the welterweight division at a catch-weight of 144 lbs. Broner will have an excuse if he loses because he can say h was fighting outside of his weight class of light welterweight in fighting Vargas. The thing is, Broner hasn’t shown the kind of talent recently that would suggest that he’d be able to beat 140 lb. fights Regis Prograis, Jose Carlos Ramirez and Kiryl Relikh. Those fighters all look better than Broner right now. So, if Broner can’t beat Vargas, it’s still cause for alarm because it will show that he’s not good enough to beat what could be 7th or 8th best welterweight in the division.

Vargas has been sparring with Devin Haney and Phil Lo Greco to get ready for the Broner fight. Vargas might end up helping those guys than he was helped. Vargas’ normal game is more than good enough to give Broner a lot of problems.


« Golovkin fights Martirosyan next, could be stripped of IBF title