Golovkin fights Martirosyan next, could be stripped of IBF title 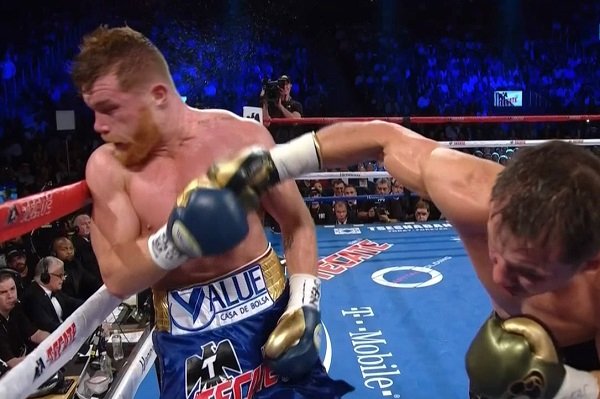 By Dan Ambrose: IBF/IBO/WBA/WBC middleweight champion Gennady Golovkin will be defending his titles against non-middleweight Vanes Martirosyan on May 5 on regular HBO, and the move could cost him his IBF 160 lb. title due to him bypassing his mandatory challenger Sergiy Derevyanchenko.

The WBA, WBC and California State Athletic Commission have all agreed to sanction Martirosyan as an opponent for Golovkin to fight.

The Golovkin vs. Martirosyan fight isn’t official yet, but GGG’s promoter Tom Loeffler is finalizing it currently.

Here’s what Martirosyan going against him being a popular choice for the Golovkin fight on May 5:

• Getting an undeserved shot at Golovkin’s titles

The positive about Martirosyan being chosen by Team Golovkin is he’s NOT worse than Gary ‘Spike’ O’Sullivan as an opponent for GGG. O’Sullivan was an awful choice, because he fights out of Ireland, isn’t well known in the U.S, and had fallen apart in the two occasions that he fought a world class fighter in Billy Joe Saunders and Chris Eubank Jr. O’Sullivan doesn’t have the Olympic credentials that Martirosyan possesses.

O’Sullivan declined the offer to fight Golovkin after previously saying that he wanted to take the fight. The Irish fighter decided that he didn’t want to take the fight due to the money not being enough for his liking, and he felt that there wasn’t enough time for him to adequately prepare or the fight.

It’s likely that the main issue that kept O’Sullivan from taking the fight with GGG was the money. When the fight was initially supposed to be televised on HBO PPV, O’Sullivan was on board with taking it, but when it was moved to regular HBO, then shortly after that he decided not to take the fight. O’Sullivan has a good chance of getting a good payday fight against Golden Boy Promotions star Saul Canelo Alvarez in the future.

It’s was in O’Sullivan’s best interest to skip the GGG fight and hold out until he gets the Canelo fight for the likely bigger payday. O’Sullivan is promoted by Golden Boy, so likely let him know that everything was going to be alright if he skipped the Golovkin fight. He’ll get a payday against Canelo. A lot of fighters can’t do that, because they don’t have the same situation going for them as O’Sullivan does with him being signed with Golden Boy.

It remains to be seen whether the IBF will strip Golovkin for swerving his mandatory challenger 32-year-old 2008 Ukrainian Olympian Derevyanchenko (12-0, 10 KOs) for his May 5th defense at the StubHub Center in Carson, California. If the IBF strips GGG of his middleweight title, it’s not likely as if he and his promoter Loeffler didn’t get sufficient warning about it ahead of time. They obviously know that the IBF title will be at risk by them not taking the fight against Derevyanchenko.

Golovkin had set a goal for himself to unify the middleweight division. That’s something he’s talked about wanting to do for the last two years, but it looks like he’s given up on that idea for the time being if not permanently. If Golovkin loses his IBF title, he’ll need to take two fights to unify the division by fighting WBO middleweight champion Billy Joe Saunders and Derevyanchenko. It’s still possible Golovkin can unify the division even if he loses his IBF belt. I’s just that it’s going to take him a little while longer to accomplish that goal.

Golovkin’s choice to fight Martirosyan isn’t a popular one with the boxing public, but the criticism he’s receiving it’s quite as severe as it was when he was on course to fight Gary ‘Spike’ O’Sullivan and Jaime Munguia. The fans really didn’t like those two fights.

Martirosyan might not be an easy win for Golovkin. He’s a step above many of Golovkin’s opponents he’s faced in the last eight years. These are the fighters Golovkin has faced since 2010:

Out of all those guys only Canelo and Jacobs would beat Martirosyan. He’s probably too talented for the rest of them including Brook, Lemieux and Stevens.

Martirosyan gave Erislandy Lara a lot of problems in their two fights in 2012 and 2016. The first fight was a 9th round technical draw, and the second one resulted in Martirosyan losing a fairly close 12 round unanimous decision in May 2016.

Martirosyan will at least give the boxing public a chance to see if Golovkin has truly slipped a notch or two. Golovkin hasn’t looked so great in his last three fights against Kell Brook, Canelo Alvarez and Daniel Jacobs. But in the case of Canelo and Jacobs, Golovkin was his own worst enemy by choosing to box those guys instead of using his punching power to try for a knockout. Golovkin had the power advantage against Canelo and Jacobs, and instead of using it, he boxed them for 12 rounds.

In GGG’s fight against Kell Brook in 2016, he chose to go after him and it worked out in his favor with him scoring a knockout in the 5th round. If Martirosyan is able to go the 12 round distance with Golovkin, then that’ll be a huge hint that he’s lost something from his game and can no longer knockout the better opposition.

What boxing fans fail to understand is Golovkin is taking this fight with Martirosyan on short notice after Canelo pulled out of the fight recently after he came up positive for clenbuterol in two tests by VADA. It’s not as if Martirosyan was Golovkin’s management’s first choice for an opponent. They wanted O’Sullivan, but they’re now getting stuck with Martirosyan.

Golovkin and his management are obviously playing it safe at this point of his career because of the big money rematch with Canelo that awaits them in September. They’re not going to blow that fight potentially by facing Derevyanchenko for a smaller money fight on regular HBO.


« Golovkin expected to face Martirosyan on May 5

Jessie Vargas: I don’t want excuses from Adrien Broner after the fight »