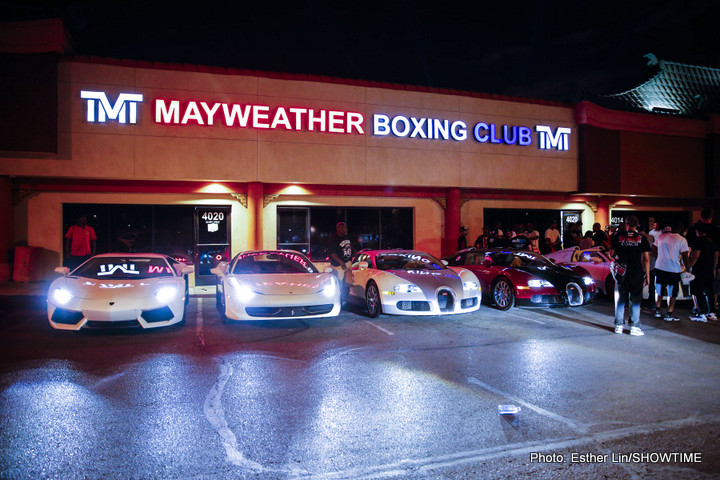 By Chris Williams: Manny Pacquiao (59-6-2, 38 KOs) is still talking about how he thinks he beat Floyd Mayweather Jr. (49-0, 26 KOs) in their ‘Fight of the Century’ two years ago in May 2015. The judges scored the fight to Mayweather by a 12 round unanimous decision, and the boxing public widely believe that “Money” Mayweather did more than enough to hand the Filipino star yet another loss.

For some reason, Pacquiao continues to believe that he won the fight or should have won the fight. Perhaps in a parallel somewhere out there in the universe, another Pacquiao beats Mayweather, but not in this world. The judges scored the fight 116-112, 118-110 and 116-112, all for Mayweather.

Chris Williams scored it 118-110 for Mayweather. I couldn’t give it to Pacquiao, because he was getting nailed with straight right hands and jabs each time he would try and attack Mayweather. After Pacquiao was hit by a number of clean right hands from Mayweather in the first three rounds, he became gun-shy about attacking the American star.

Pacquiao says he injured his shoulder in the 4th round. Maybe he did injure his shoulder, but it was his mistake in taking the fight with a preexisting injury rather than choosing not to take the fight and having surgery. That would have been the far smarter thing for Pacquiao to do, wouldn’t it?

“I only lost in the eye of the judges, in the eyes of the people I didn’t lose,” said Pacquiao to Fox Sports News. “It just happened that [in the] third or fourth round I injured my right shoulder. I felt like I have only one arm but thank God that I survived until 12 rounds.”

Mayweather is not interested in throwing a bone to Pacquiao by giving him a rematch. He gave him his title shot, and he lost the fight. Mayweather doesn’t see the fight as being appealing enough for him to want to bother signing for it a second time, and going through another training camp to face a guy he already whipped.

“That book is closed,” said Mayweather.

Pacquiao has stopped facing the best opposition since his loss to Mayweather. In his last two fights since then, he’s fought and beaten Tim Bradley and Jessie Vargas. Those are two good serviceable fighters, but not top talents in this day and age in the 147lb division. Bradley was the sectioned off WBO champion in the past, but he never fought anyone that you can call a good fighter like Keith Thurman, Danny Garcia, Kell Brook, Shawn Porter or Errol Spence Jr.
Pacquiao will be facing Jeff Horn (16-0-1, 11 KOs) on April 23 at the Suncorps Stadium in Brisbane, Australia.

Many boxing fans wonder why Pacquiao is taking on such a little known fighter of meager talent, but it appears that Pacquiao is on a milking run in finishing out his career with easy paydays instead of facing the top talent in meaningful fights. I wouldn’t be surprised if Arum trots out Bradley and/or Vargas again for another round of rematches. My guess is Arum would prefer to do that then to match Pacquiao against guys outside of his Top Rank stable of fighters.

Pacquiao says he would be interested in fighting UFC star Conor McGregor in a boxing match.
“In boxing? In boxing (I would fight McGregor) but not in the UFC, just boxing,” said Pacquiao to Fox Sports News. “I didn’t see it [footage of Conor sparring]. But if we are talking about Conor McGregor and boxing, it’s different. Boxing is different than MMA. I’m sure he will be moving around.”

Speaking about a potential fight between Mayweather and McGregor, Pacquiao said, “I don’t know if they are taking it seriously. It’s on the news but I don’t know if it will happen.”

I think the Mayweather-McGregor fight WILL HAPPEN, and it will happen soon. That’s what I believe. McGregor’s boss at the UFC Dana White already offered Mayweather $25 million to fight McGregor. That’s a clear sign that he’s interested in making a fight between those two guys. White probably realizes now how much money there is to be made between him pitting some of his UFC stars against Mayweather and other top boxers. If nothing else, it will bring a lot of money and interest into the UFC. It reminds me of the early days of the AFL when they were separate from the NFL. They eventually merged with the NFL in 1970.

I think the UFC can gain a lot of attention if they match their fighters up against boxers in a boxing ring every now and then rather vice versa. It’s a great way to get boxing fans to come over and recognize the UFC, and it’s a great way to increase the star power for their top fighters like McGregor and Nate Diaz.

As far as Pacquiao fighting McGregor goes, I don’t see there being any interest on McGregor’s part in taking that fight. With Pacquiao’s PPV numbers dropping off badly in his fights against Brandon Rios, Chris Algieri, Tim Bradley and Vargas, I don’t see there being enough interest on McGregor’s side to want to fight a guy who can’t pull in the fans.

If McGregor is going to take on a boxer, it’s going to be Mayweather if the two of them can successfully negotiate a fight between them. McGregor needs to know his place in the negotiations. He’s the B-side, so he would need to take a small cut of the revenue. I can’t say what for certain McGregor is worth getting, but I think 25% would be a decent amount, as long as Mayweather gets his asking price of $100 million guaranteed. That money is just to get Mayweather into the door.


« Haye: Eubank Jr. has a chance of beating Golovkin