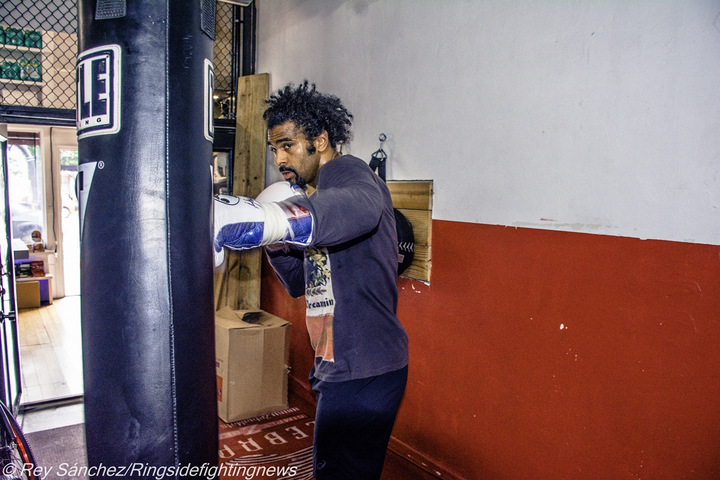 By Chris Williams: David Haye (28-2, 26 KOs) sees himself in the twilight of his boxing career with only five remains with one of them being against Tony Bellew, and possibly two others being against Anthony Joshua and Tyson Fury. Haye, 36, wants to maximize his income before he calls it a day to become a fulltime promoter with Haymaker Ringstar with Richard Schaefer, the former Golden Boy Promotions CEO.

Haye has the Bellew (28-2-1, 18 KOs) fight scheduled for March 4 on Sky Box Office pay-per-view at the O2 Arena in London, England. Haye is hoping to make quick work of the 33-year-old Bellew, and then move onto bigger and better things against Joshua and Fury. The fight against Joshua is one that will almost surely happen, as his promoter Eddie Hearn is interested in the fight.

Fury is a different story. He might not be willing to take a fight against Haye due to him pulling out of two fights against him due to injury problems. In the past, Fury has repeatedly said that he will never schedule another fight against Haye because he doesn’t have faith he’ll make into the ring.

“Anthony Joshua is the first target because he’s got the most momentum behind him,” Haye said. “There’s rumblings of Tyson Fury making a comeback and if he does, I’m sure he’ll want a big payday because he’s not had one yet. I’m not sure what his situation is but if he does come back, if it’s not myself it will be Joshua. Between the three of us, there are some big fights out there. I want five more fights. That’s all I’ll need to prove what I need to prove before I retire.”

Haye can fight five times, but he may need to be contest with Joshua and Bellew being his only big money fights of the five. As I pointed out already, Fury is not likely going fight Haye. If Haye loses to Joshua, then he can probably forget about getting a fight against WBC champion Deontay Wilder.

Instead of Haye fighting Fury and Wilder, he may need to be content in fighting the likes of Joseph Parker, Luis Ortiz, Hughie Fury, or Shannon Briggs. Even those guys might not opt to take on Haye. It’s more than likely that Haye is going to need to settle for the likes of Briggs and Ortiz to round out his final five fights. I don’t think Haye is going to get the big names that he wants after he faces Bellew and Joshua.

Welterweight contender and 2008 Olympic gold medalist Felix Diaz (19-1, 9 KOs) is interested in facing WBC/WBO light welterweight champion Terence “Bud” Crawford (30-0, 21 KOs) in his next fight. HBO has reportedly approved the 33-year-old Diaz as an opponent for Crawford, and now all that needs to be done is Top Rank, the promoters for Crawford, to green light the fight.

There aren’t any of the top fighters available that Crawford would like to fight such as Ricky Burns and Manny Pacquiao. Diaz, 5’5”, is available and he’s willing to travel to Crawford’s hometown of Omaha, Nebraska to fight him. Crawford draws well in Omaha, and the crowds don’t seem to mind his frequent movement in the ring and his counter punching style, which is sometimes boring to watch.

Felix Diaz said this to ESPN.com about wanting to fight Crawford:

“It doesn’t look like he’ll be fighting [Manny] Pacquiao anytime soon,” said Diaz. “I am highly ranked by the WBC and WBO, and I am willing to go to Omaha, if that’s what he wants. I respect Crawford as a champion and would love the opportunity to knock him out in his hometown. My promoter, Lou DiBella, is ready and willing to talk to Bob Arum to get a deal done. It would be a great fight for boxing fans. Let’s get it on.”

Diaz is promoted by Lou Dibella, and h has recent wins over Sammy Vasquez and Levis Morales. Diaz lost a controversial 12 round majority decision to Lamont Peterson in October 2015. For many boxing fans that saw the fight, they felt that Diaz had done more than enough to deserve the victory.

Diaz has a win over Adrian Granados in November 2014. Granados is a very good fighter, and will be facing Adrien Broner next month on February 18 in Cincinnati, Ohio.
It’s hard to know what the holdup is with Crawford and Top Rank. It would seem like a good choice for them to agree to a fight against Diaz. Of course, it would also be a very hard fight for Crawford compared to anyone he’s faced before.

The only guy that you can compare Diaz to on Crawford’s resume is Yuriorkis Gamboa, who Crawford struggled badly with in the first four rounds of their fight in 2014. The difference with Diaz is he’s more polished and with a better chin and superior size than Gamboa. Diaz can take a shot without going down unlike Gamboa. Diaz also doesn’t lose his composure after getting hit hard like we saw with Gamboa. Crawford beat Gamboa largely due to Gamboa losing his cool and going to pieces after he was knocked down in round 5 on a slip.

Gamboa was hit while he was slipping on the canvas. It was a flash knockdown, and it shouldn’t have been a big deal for Gamboa. But he got up, and started swinging for the fences instead of continuing to box like he’d done before the flash knockdown. By going wild on Crawford, Gamboa left himself open for a lot of counter shots, and this enabled Crawford to drop him in 8th and two more times in the 9th. Diaz is a different story. He won’t lose it if he gets hit with big shots. He’ll keep fighting, and he’ll use his boxing skills to take the fight to Crawford.

I can understand if Top Rank chooses to steer Crawford around Diaz. If you look at the guys that Crawford has been facing thus far in his career, Diaz is a big step up from the fighters he’s been facing. In Crawford’s last four fights, he’s beaten John Molina Jr., Viktor Postol, Hank Lundy and Dierry Jean. Postol fought like an amateur, and Molina was as bad as he was in his loss to Adrien Broner. Molina Jr. didn’t deserve a title shot with his 4 losses in his last 8 fights going into the Crawford fight. Molina’s record was 4-4 in his last eight fights before being picked out for Crawford.