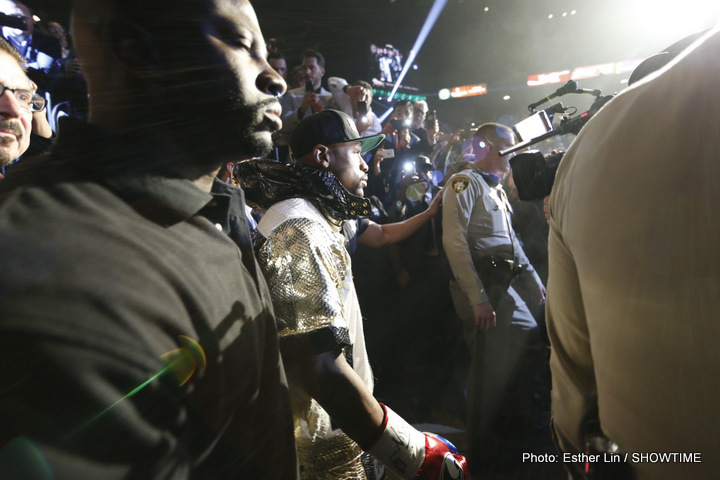 By Allan Fox: CBS chairman and chief executive Leslie Moonves reportedly believes a rematch between Floyd Mayweather Jr. and Manny Pacquiao is possible, according to the LA Times. Moonves told Pacquiao’s trainer Freddie Roach he thinks the rematch can take place. Roach and Pacquiao both want a second chance at Mayweather after losing a 12 round decision last year in May in the ‘fight of the century in 2015.

Thus far, the 39-year-old Mayweather has been consistent in his decision not to fight Pacquiao again despite the huge amount of money he could make from the fight. Mayweather is currently promoting and doing a lot of traveling. He’s obviously making money in his promotional efforts and with his investments, but he can make far more by facing Pacquiao a second time.

Getting Mayweather to agree to a second fight will require someone to step in and persuade him that it’s worth it.

That would be great news if Moonves could persuade Mayweather to fight Pacquiao again in 2017. It would be a huge fight, even if it brings in only half the pay-per-view buys of their previous fight last year. The Mayweather-Pacquiao fight brought in 4.6 million buys. Those numbers were done despite minimal money being spent promoting the fight.

There wasn’t much of a tour at all. They did it on the cheap by not including a huge promotional tour like Mayweather had done with his big money fight against Saul Canelo Alvarez in 2013. The undercard for the Mayweather vs. Pacquiao fight was a poor one, as they promoters assumed that the boxing fans would purchase the fight regardless of who fought on the undercard.

They were right. The fight brought in a lot of buys. If there’s going to be a Mayweather-Pacquiao rematch, they need to put some money into a tour if they want to get the most money out of the fight, because there were a lot of boxing fans that were unhappy with the effort the two fighters put in.

It was a boring fight, as neither guy seemed to be willing to mix it up in a big way. The fans weren’t happy to learn the news after the match was over that Pacquiao came into the fight with a shoulder injury. Because of how the fight was played out last time, the rematch is going to need more work from the promoters to create interest.

With some boxing fans likely still angry at the hiked prices and the poor efforts from the two fighters from the last fight, it’s going to take some effort from the promoters this time around if they want to get the most money from the fight. Of course, the promoters can try the same tactics they used last time by assuming the fight will sell itself, but that lazy/stingy approach to marketing the fight will likely result in the match not selling as good as it could sell.

“Floyd’s been as consistent as he’s ever been. He says he enjoys retirement and promoting and won’t engage with us, even in a joking way, about coming back,” said Showtime boss Stephen Espinoza to the LA Times. “So I’m not sure how to get the ball rolling in regard to getting him back in the ring, but I’m not going to give up.”

If Espinoza can’t get Mayweather to agree to a rematch with Pacquiao, then it’s going to require that Moonves does what he can to make the fight happen. If he really believes that he can put the fight ogether again, then he needs to make the move to try and put it together, but the longer they wait to make the fight happen again the less interest from the boxing fans. It doesn’t help that Mayweather is inactive in retirement. It also doesn’t help that Pacquiao isn’t fighting popular guys. Pacquiao fought Tim Bradley last April in a fight that the fans were not demanding, and zero interest in seeing after Pacquiao previously already fought Bradley.

Pacquiao is fighting Top Rank guy Jessie Vargas (27-1, 10 KOs) next month on November 5 on Top Rank pay-per-view from the Thomas & Mack Center in Las Vegas, Nevada. The fight has not generated a lot of interest despite Top Rank promoter Bob Arum saying it has. It’s a fight that could wind up bringing in poor PPV numbers.

It’s not going to help Pacquiao if he continues to fight the less popular welterweights like Vargas and Bradley instead of the guys that the fans see as the best in the division. The only positive that is coming out of the Pacquiao-Vargas fight is that Pacquiao will likely win the fight without any problems, and he’ll capture the WBO 147lb title that Vargas has in his possession.

A rematch between Mayweather and Pacquiao might be dead on arrival to the fans. With neither fighter relevant any longer due to them either being retired or not facing the true talented fighters in the sport, a rematch between them might be seen as an old timer’s fight rather than one that has any meaning. The fans aren’t going to want to see old timers that are just looking to get a payday. The fans want to see real fights involving the best.