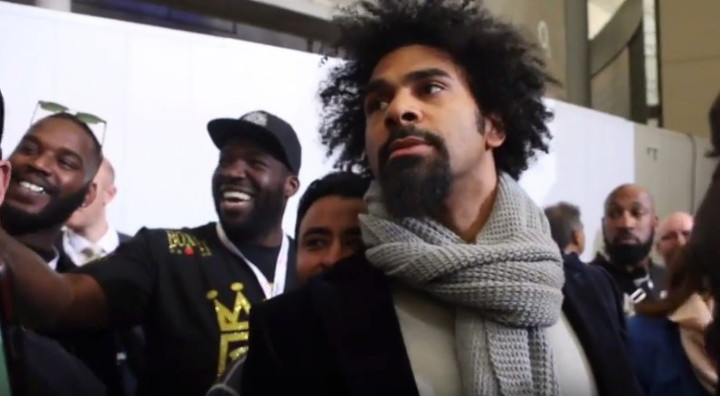 By Scott Gilfoid:” Shannon Briggs says he’s unhappy with British heavyweight David Haye, as feels that he’s not a man of his word by him failing to give him a fight after he agreed to fight on his undercard last May at the O2 Arena in London, England.

The 44-year-old Briggs thought that by fighting on Haye’s undercard, he would then get a fight against him. However, Haye hasn’t given Briggs a fight, and it’s unclear if he ever will. Haye recently said that a fight between him and Briggs would need to be on pay-per-view, because the interest isn’t there.

The only way it could be a pay-per-view fight is if he wins a world title first. Haye believes he’ll win a world title in 2017. That remains to be seen, because it would require that Haye beat the likes of Anthony Joshua, the winner of the Joseph Parker vs. Andy Ruiz Jr. or whoever winds up with the vacant World Boxing Association heavyweight title. Haye would be an underdog against Joshua, and likewise, he would probably be an underdog against Parker as well.

“David backed out, he’s not a man of his word,” Briggs said to skysports.com. “It boils down to basically him being an opportunist. He took advantage of me fighting on his card. Then afterwards, he went looking for another fight, an easier fight and some would say a more lucrative fight. But the truth of the matter is, I don’t think there’s a bigger fight for him financially out there right now. We know and I know personally that David is afraid of me.”

You can understand why Haye might not be so excited about a fight against Briggs. It’s a no win situation for Haye. Briggs carries a lot of power in both hands, and he’s an incredible body puncher. He’s like another George Foreman type of fighter. Briggs is a natural heavyweight, and he would be dangerous to Haye every second he’s in there.

At 6’4”, Briggs would have the reach to get to Haye. The last guy that beat Briggs was the 6’7” Vitali Klitschko, who used his height and size to dominate Briggs in their fight in 2010. Briggs injured his left biceps early in that fight, and was forced to fight with just his right hand. Vitali won the fight on size alone. Haye doesn’t have that kind of size. He can’t do the same type of things to Briggs that Vitali did. With Briggs’ good chin, it means he would likely stick around long enough to drop some of his bombs on Haye’s body and head. There are major question marks about Haye’s stamina right now.

What happens with Haye once he’s dragged past the first five rounds? I wouldn’t be surprised if Haye were to gas out against Briggs. If Haye faded against a puncher like Briggs, it wouldn’t be a pretty picture, believe me. Briggs has incredible power, and he goes to the body like no one in the division today. Haye has never fought a body puncher before during his career, and he’s kind of long in the tooth to experience that kind of fighter.

“I think it’s simply down to the fact he doesn’t want a dangerous opponent right now. He’s going to pad his record, get a couple of wins, and hopefully get a title shot against Anthony Joshua,” said Briggs.

Briggs is intelligent, and he obviously has figured out why Haye wants no part of fighting him. At this point, I think it’s a waste of time for Briggs to try and get a fight against Haye, because it doesn’t look like it’s going to happen.

Haye is going to be fighting in December against somebody. After that, win or lose, Haye will likely face cruiserweight Tony Bellew in early 2017. That’s a mismatch, but an easy money fight for Haye. It’ll be on pay-per-view in the UK, and Haye will likely KO Bellew in one or two rounds.