By Charles Brun: The talented former WBC heavyweight champion Deontay ‘Bronze Bomber’ Wilder reveals that Anthony Joshua has no intention of fighting him, and he doesn’t understand why fans are still asking about the two of them meeting inside the ring.

Wilder (43-2-1, 42 KOs) points out that when Joshua rejected a $50 million offer to fight him years ago, he understood then that the 2012 Olympic gold medalist didn’t want it.

Taking into account that Joshua’s career is now on brink of sinking into the quagmire, never to resurface again, it’s forlorn to even think of a fight between him and the 6’7″ Wilder, who is looking better than ever after having been refurbished by his Einstein-esque trainer Malik Scott.

After losing his last two fights,  Joshua is being matched against a non-puncher in Jermaine Franklin on April 1st at the O2 Arena in London. The hope is that Joshua can spark Franklin out within three rounds and look like the 24K gold fighter he’d resembled early in his career when his wily promoter Eddie Hearn was feeding him one hors D’oeuvre after another, building up a plastic record, making AJ look like he was ready to be stored in Fort Knox along with the $7 trillion in gold bars.

“Joshua don’t want to fight me; it’s plain and clear. I don’t know why people keep asking about that,” said Deontay Wilder to ESNEWS about Anthony Joshua wanting no part of fighting him.

“Everybody should’ve known when the $50 million was offered, and he didn’t take it. Even moving forwards, Joshua don’t want to fight. They should have known then there was something fishy about it,” said Wilder. 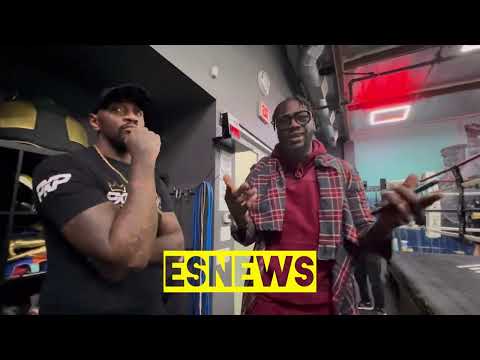 It’s useless on Wilder’s part to even be talking about fighting Joshua because it’s patently obvious that the fight is never going to happen between them.

The chances are high that Joshua’s career will be finished off by Franklin (21-1, 14 KOs) on April 1st, and if he doesn’t upsend him, Tyson Fury will put the coup de grace on him in December.

Wilder has bigger fish to fry, going after Andy Ruiz Jr next in a WBC title eliminator and then looking to avenge his two losses to Fury in early 2024. Joshua will probably retire this year after he suffers another two defeats to go along with his three others.


« Deontay Wilder on Fury vs. Usyk: “Depends on who’s going to cheat the hardest”