By Sam Volz: Former two-time heavyweight champion Anthony Joshua and American Jermaine Franklin have finalized a deal to fight on April 1st at the O2 Arena in London, England.

Joshua (24-3, 22 KOs) has decided to face one of the best heavyweights in the division in Franklin (21-1, 14 KOs) for what is a tune-up of sorts to get him ready for what many feel is the real tune-up against the faded old veteran Dillian Whyte in stadium fight in July.

The Daily Mail is the first on the news of the Joshua-Franklin fight being finalized for April 1st for what should be an entertaining match-up from start to finish.

Needless to say, this could be a big mistake for Joshua and his clever promoter Eddie Hearn selecting Franklin as his warm-up opponent because this guy is the equivalent of an improved version of Andy Ruiz Jr, without the weight issues.

Franklin is dedicated to his craft, and he won’t be slacking off during training camp, coming into the Joshua fight a portly 283 lbs, as we saw with Ruiz Jr in his rematch with AJ.

Jermaine possesses hand speed on the level of Ruiz, and he’s a far better combination puncher with superior technical skills. What Franklin lacks that Ruiz had going for him against AJ is punching power.

To be sure, Franklin doesn’t pack a lot of power, but that might not matter.

Joshua’s poor punch resistance makes him vulnerable to even a non-puncher like Franklin because his hand speed is so good that he could get AJ with a shot that he doesn’t see coming, as he did repeatedly in his last fight against Dillian Whyte.

For the boxing fans that didn’t watch Franklin’s recent controversial loss to Whyte last November, they’re upset by this choice of opponent. They feel Franklin’s loss to Whyte means he’s a poor choice to fight Joshua.

For those that saw the fight and their brains & memory of the contest are fogged by alcohol, they witnessed Franklin schooling Whyte, appearing to win 9-3. Joshua and his promoter Eddie Hearn obviously saw the Whyte-Franklin fight, and they were impressed enough to want Franklin for the April 1st bout at the O2.

Joshua could very well lose to the 29-year-old Franklin and wind up with his career on skidrow, finished off for good, putting him on the dirty back road of winding up as another one of many washed-up fighters like Derek Chisora & Whyte, taking advantage of their past accomplishments to still make money. 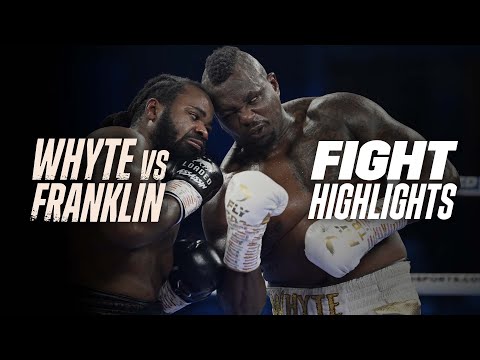 Anthony Yarde to be tactical against Artur Beterbiev »