In a battle of 2012 Olympic gold medalists, Joshua looked mentally disengaged most of the fight against the former undisputed cruiserweight champion Usyk at the Tottenham Hotspurs Stadium in London, UK.

To say that Joshua wasn’t at his best is a huge understatement. AJ looked like he was at his career-worst, not throwing punches, and looking like he was painting by the number system against Usyk.

Where the fight was arguably won for Usyk was in the first round when he caught Joshua with two hard left hands down the pipe. Those shots showed Joshua that Usyk possessed enough power to hurt him.

Usyk says he can fight differently in a rematch

“It makes me look better,” said Usyk to iFL TV about the bruises around his eyes from his fight with Joshua. “Why shouldn’t I be happy? I had a victory. And I went through hell during training camp, so now I just need to relax.

Usyk will need to fight differently in the rematch, seeing that Joshua is going to be fighting more aggressively, attacking throughout after underperforming last night.

Joshua is already being dumped on by scores of boxing fans, fighters, ex-fighters, and coaches for his lack of offense against Usyk.

It’s kind of hard for people to understand how Joshua could fight an entire 12 round contest against Usyk without using his size and power to go on the attack against the smaller fighter.

Joshua treated Usyk like he was a knockout artist with one-punch power, and never failed to chase him down the way most top heavyweights would have.

If this was the game plan that Joshua’s trainer came up with, he needs to sack him right away because that’s pure incompetence.

Joshua needs to dump his trainer

It wouldn’t hurt at this point for Joshua to swap out his trainer for a more assertive coach that will put a fire under him to stop trying to box all the time.

Joshua needs a coach that will give him a good game plan and make sure that he follows it. With the Usyk fight, one can tell it was Joshua’s idea to box him and it was a BIG mistake.

“Of course,” Usyk said when asked if the goal for him AFTER his rematch with Joshua to become the undisputed heavyweight champion.

“Thank you so much, my English fans, I love you,” said Usyk in giving his fans his final words. 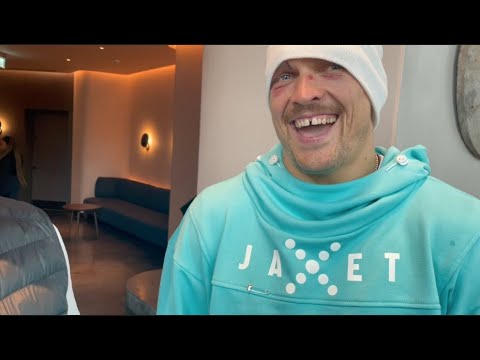