By Allan Fox: Dillian Whyte seemed to take Anthony Joshua’s loss to Oleksandr Usyk harder than he did after the scores were announced last Saturday night at the Tottenham Hotspurs Stadium in London, England. The judges scored 117-112, 116-112, and 115-113, all for Usyk.

Dillian wanted Joshua to apply a lot of pressure on Usyk and let his hands go. Joshua

Predictably, Joshua fought tentatively during the contest because he didn’t want to get countered by Usyk in the same way he was in his loss to Andy Ruiz Jr. Joshua doesn’t have the chin or the stamina to fight the way Whyte wanted him to.

Whyte looked very upset when Usyk was announced as the winner. Joshua’s defeat likely means Whyte will never get a chance to fight Joshua ever again, and that has to be disappointing for him.

Moments before the ring announcer revealed the scores, Whyte surprisingly said he had Usyk (19-0, 13 KOs) winning by one or two rounds. He thought Usyk barely won the fight, which was a different view from the judges and the fans saw it 9-3 or 8-4.

It’s a good thing Whyte wasn’t one of the judges for the fight because his scores would have been laughed at by the fans.

For Whyte to have Usyk winning by one round, that’s troubling. At best, Joshua won four rounds, but to give him is pushing it.

“I think he [Usyk] did [win]. He was pressuring Joshua all the way through. Joshua was very tentative. Joshua didn’t fight the way I expected him to fight, no.

Joshua wants a rematch with Usyk, and he’ll probably have no problems getting one.

It would be better for Joshua to have his promoter Eddie Hearn line him up to challenge the winner of next month’s October 9th fight between WBC heavyweight champion Tyson Fury and Deontay Wilder.

Joshua might do better against Fury or Wilder because those guys aren’t as difficult to hit as Usyk. Yeah, Fury has good head and upper body movement, but he can’t move around the ring like Usyk.

Joshua can get to Fury a lot easier than he can with Usyk, and there’s so much more money in that fight for AJ than in a rematch with Oleksandr.

We could see Whyte losing next when he faces Otto Wallin on October 30th. That’s a risky fight for Whyte because Wallin is no joke.

He gave Fury all he could handle in a fight a couple of years ago, and he could have won that fight if the ringside doctor had pulled the plug due to the huge cut Tyson had suffered. 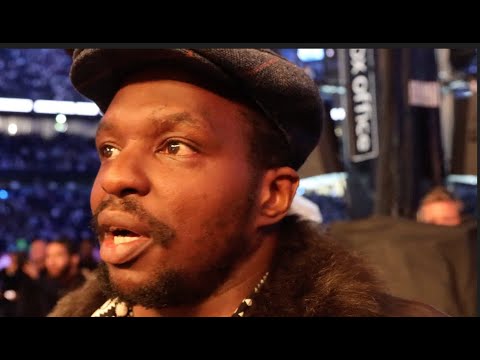