By Barry Holbrook: Eddie Hearn looked like he was in a state of shock following the unexpected defeat of the Matchroom Boxing flagship fighter Anthony Joshua to Oleksandr Usyk last Saturday night in London.

Hearn says the Joshua-Usyk rematch will likely take place in the UK and not in Ukraine next February. The temperatures in Urkaine are freezing in February.

Hearn wants to “maximize” the revenue for the Joshua vs. Usyk 2 rematch, and he believes staging the fight in the UK would help meet that purpose.

Last week, Hearn signed Joshua (24-2, 22 KOs) to a contract that will take him to the end of his career. Little did Hearn know that Joshua would lose to Usyk (19-3, 13 KOs) and is now facing career oblivion in a yet-to-be-negotiated rematch.

If you ask newly crowned IBF, WBA & WBO heavyweight champion Usyk where he wants the rematch to occur, he’ll tell you he wants it back home in his native Ukraine.

After all, Usyk is now the three-belt champion after his mesmerizing victory over Joshua last Saturday night at the Tottenham Hotspurs Stadium in London. England.

But with that said, Usyk isn’t going to reject taking it back to the UK for the rematch if it means more money.

Joshua was winning through eight rounds

“I just looked at the scorecards. He [Joshua] was winning the fight through eight rounds, and he lost every round, nine, ten, eleven, twelve on every card, and that’s what swung the scorecards,” said Eddie Hearn at the post-fight press conference last Saturday following Joshua’s defeat.

It didn’t matter that Usyk was the smaller fighter, as the former undisputed cruiserweight champion out-boxed and surprisingly outworked Joshua in eight of the twelve rounds.

Usyk schooled Joshua was the same way he defeated the equally big 6’6″ Joe Joyce in 2013 in the World Series of Boxing.

If there is going to be a rematch in the UK, Usyk will need to fight better than he did last time because Joshua is going to be bringing it looking to get revenge.

Even with Joshua fighting conservatively, throwing few punches each round, he did a lot of damage to Usyk’s face. You can expect Joshua to throw many more punches each round in the rematch, making it a different fight.

“Very unlikely,” said Hearn when asked WHERE the Usyk vs. Joshua rematch will take place. “Ukraine isn’t great in February. We’ll work together to maximize the revenue. Ukraine is very unlikely. I think more likely it’ll be in the UK,” said Hearn.

Usyk might have something to say about where the rematch will take place with Joshua. As the new three-belt champion, it’s a little odd for him to play B-side for a rematch with Joshua.

You can argue that taking the rematch to Ukraine will significantly increase Usyk’s chances of winning because he fights well when supported.

Last Saturday night, the only time fans were cheering was when Joshua was doing well, playing against Usyk.

But to his credit, Usyk seemed more motivated to attack Joshua when the crowd was screaming, as he wanted to get back at him when he would land a good shot. 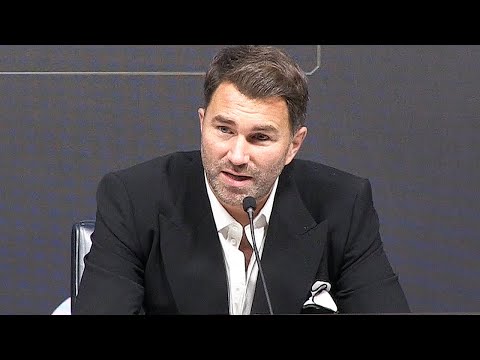