By Charles Brun: Tyson Fury is giving Anthony Joshua zero chance of going the distance with him in their August heavyweight unification fight.

At this point, Fury isn’t ready to say definitely that he’ll be facing IBF/WBA/WBO champion Joshua next.

‘The Gypsy King’ says the media will have to speak to his promoter Bob Arum to determine whether the AJ fight is happening next.

With the new Gorgeous George remake of his image, the well-dressed WBC champion Fury (30-0-1, 21 KOs) says Joshua (24-1, 22 KOs) is too slow and too musclebound to land any of his big bombs on him if they fight.

“Then he loses a one-sided landslide points decision,” Fury said to Fighthype when asked what happens if Joshua uses the Otto Wallin blueprint to attack him. “He got the [bleep] punched out of him as well why he was at it.

“Then he gets knocked the f*** out early,” Fury said about Joshua rushing him, looking for a quick stoppage.

“Either way, if the Joshua fight happens, he doesn’t go the distance. He gets knocked out. He’s no good to me; none of these fighters are. He’s too slow, too musclebound, and he works on too much weightlifting and not enough speed.

The lack of power and speed that Fury showed in his workout video with trainer Sugar Hill Steward that he posted on social media recently suggests he could be in deep trouble when he gets inside the ring with Joshua.

With very little power to speak of, Fury could be up the creek without a paddle when he and the big-punching Joshua start trading blows.

Fury needs to do a good job selling his first fight with Joshua because his career could nosedive straight to the bottom if he gets blasted to bits on August 14th.

The interest in the second fight could evaporate next nothing if Joshua obliterates Fury in the first match.

“Too much power and no speed. Good luck trying to catch me with one of them,” Fury said about the big left hooks that Joshua was throwing during a recent workout.

Joshua will catch Fury with body shots, as that’s something he’s been working on lately. He’s not going to be focusing on throwing headshots with Fury moving his upper body nonstop like he always does.

“I think he’ll catch me with a cold before he catches me with one of them,” Fury continued. “If he has a handful of stones and throws them at me, he may have a chance of hitting me, but with those big oaks, not a chance. 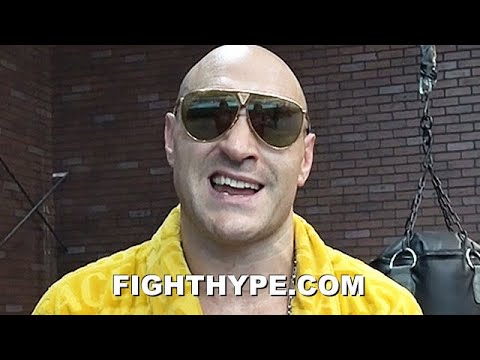 Saunders proved he can mix at the top level – Josh Taylor »