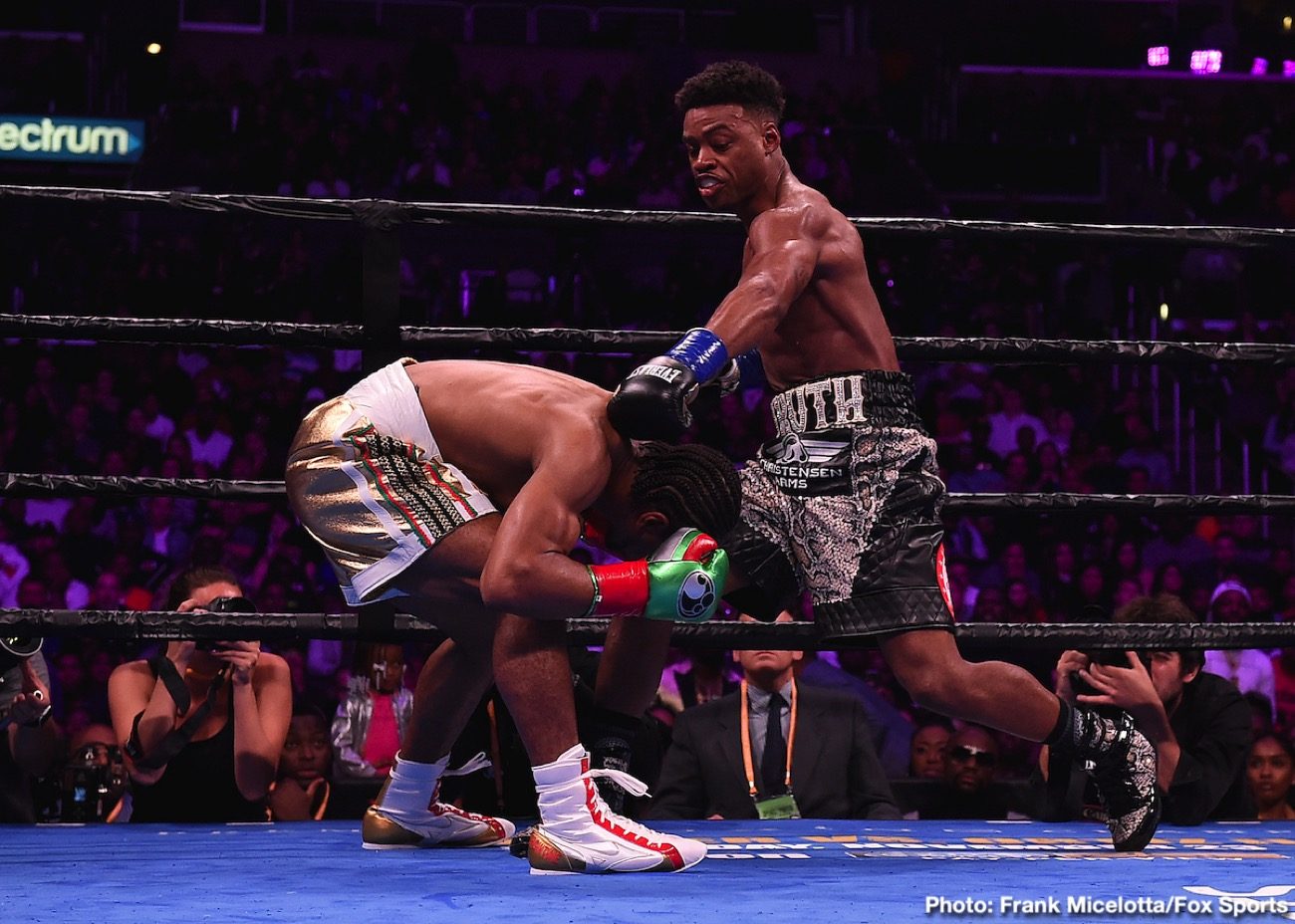 By Chris Williams: After years of failure at getting a fight against Keith Thurman, Errol Spence Jr. is now able to rejoice at seeing the former WBA/WBC welterweight champion reduced to being that of a contender needing to ask for a world title shot.

Before recently losing his WBA welterweight title to Manny Pacquiao last year, Thurman said he had intended on fighting Spence in a unification fight in 2020 or 2021. Unfortunately, losing his WBA title to Pacquiao ruined Thurman’s plans for the Spence unification match.

IBF/WBC 147-pound champion Spence (26-0, 21 KOs) had tried for five years to get Thurman (29-1, 22 KOs) to fight him but with no luck. Spence is bitter about Thurman failing to give him a fight, and that’s why he’s saying now that he’s NOT interested in giving him a title shot.

When Spence wanted a world title shot against Thurman from 2015 to 2017, he was ignored by him. During those years, Thurman spoke about wanting to let the fight with Spence ‘marinate’ until it was a more significant affair before he would fight him.

At the same time, Thurman was practically begging for Floyd Mayweather Jr. and Manny Pacquiao to fight him. Thurman didn’t believe that he needed to have his fights against those two stars marinate, considering he’d done nothing with his own career to make him a viable opponent for them. 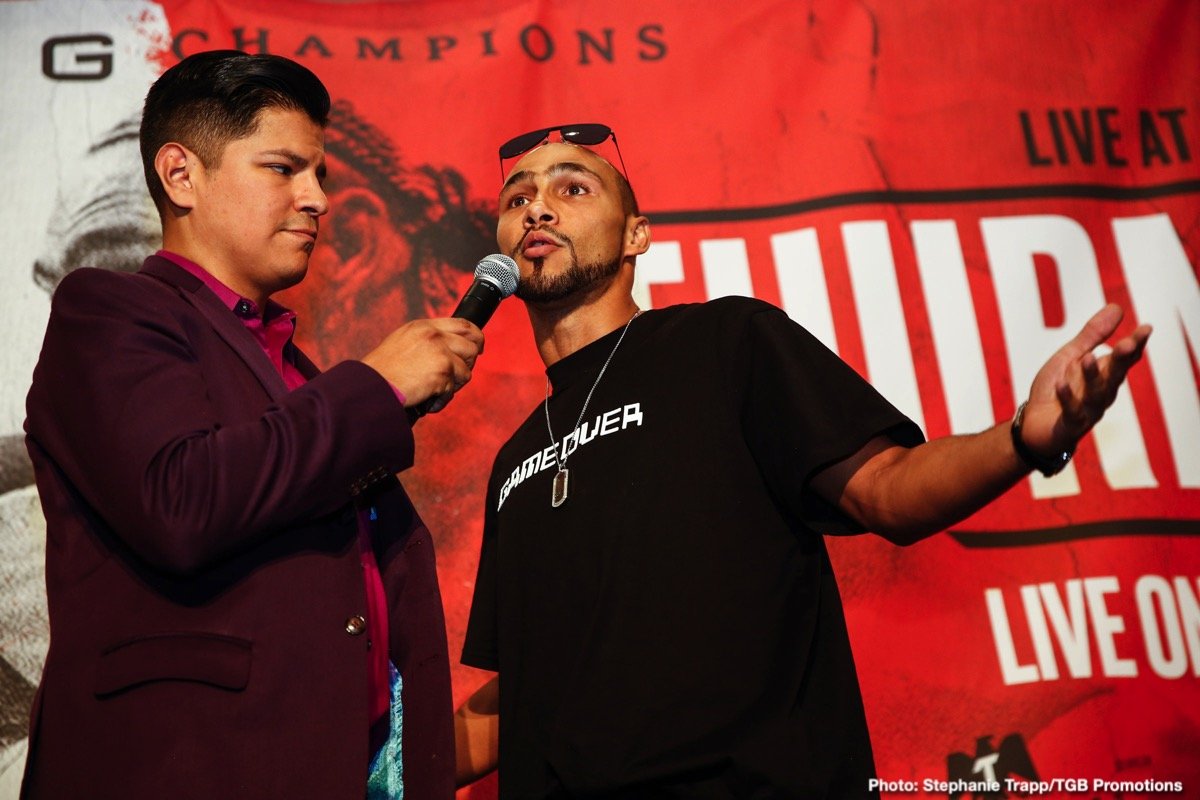 Spence doesn’t want to give Thurman a title shot

Thurman is now needy in the position where it could take him a while before he earns a crack at a world title. ‘One Time’ Thurman is going to be trying to talk his way into a rematch with Pacquiao and may succeed if he pushes hard enough.

At 31, time isn’t on Thurman’s side to work his way back into a title shot the old fashioned way. That’s why he needs fighters like Spence and Manny Pacquiao to throw him a bone by giving him a title shot for old time’s sake for what he did in the past instead of what he’s done lately, which is nothing.

Spence will be shooting himself in the foot if he chooses to permanently freeze out Thurman, considering that he’s the most prominent name he can fight among the PBC welterweights aside from Pacquiao. If Spence is going to hold a grudge against Thurman and ignore him, he’ll be hurting his own career. If Spence doesn’t give Thurman a shot, then his options are limited to these fighters:

Recently, Thurman blew his opportunity to face Spence in a unification bout at 147 by electing to take on Manny Pacquiao instead.

Thurman could have fought Spence LONG before he fought Pacquiao, but he didn’t want the fight with the Texas native for whatever reason. Was it FEAR on Thurman’s part that kept him from fighting the unbeaten Errol from 2012 to 2020?

The elbow injury that kept Thurman on the shelf from 2017 to 2019 still doesn’t let him off the hook for not fighting him in 2019 or earlier in his career. 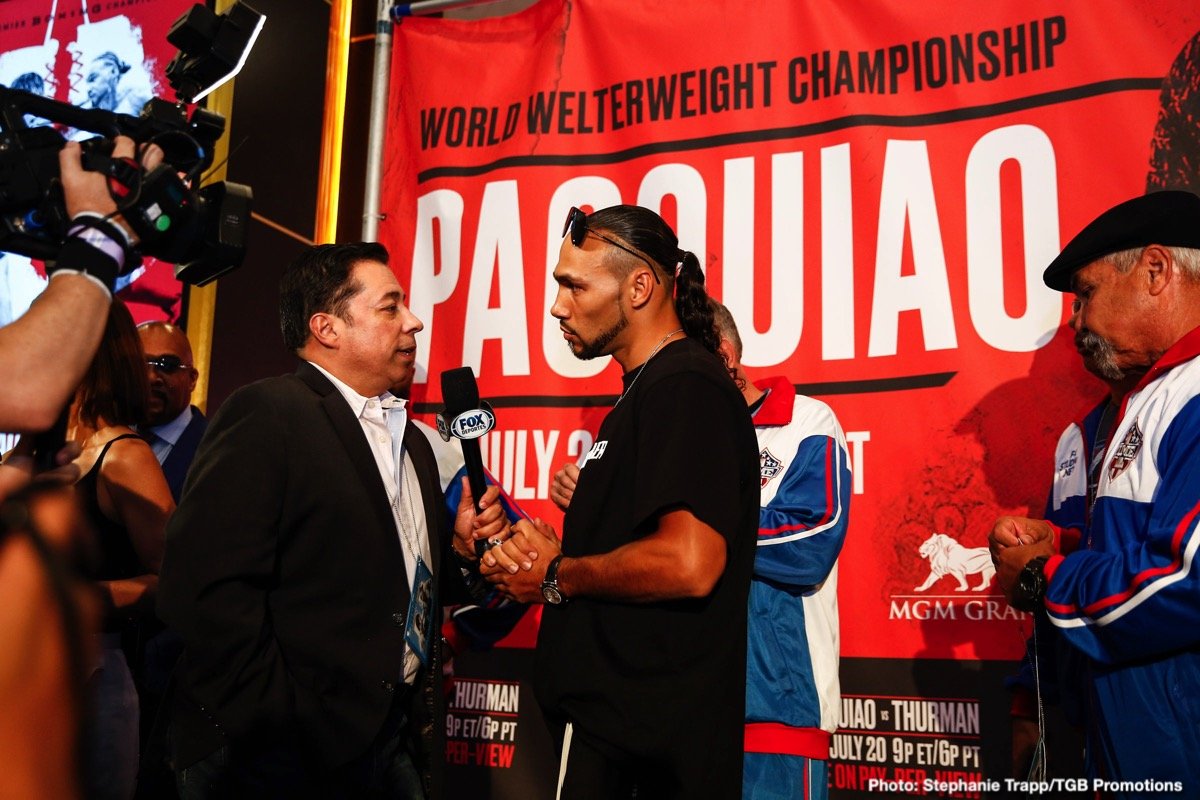 Spence was FROZEN out by Thurman

Thurman was always more interested in fighting guys like Jesus Soto Karass, Diego Gabriel Chaves, and Jan Zaveck than he was in taking on Spence.

In his last fight, Thurman lost his last remaining WBA title to 41-year-old Manny Pacquiao in a 12 round split decision last July. Thurman had already been forced to give up his WBC welterweight title in April of 2018 due to his injury problems.

“I mean, I want my belts back and I want the Spence fight because ultimately I saw a big clash between me and Spence leading into a year like this, 2020, 2021 year like this,” said Thurman to ESPN.

“I always saw the big fight [against Spence] happening BUT, you know, we were both undefeated champions of the world and I thought that’s how I was going to be introduced into Errol Spence, as an undefeated welterweight champion,” said Thurman.

Hopefully, Thurman doesn’t start with 2020 being his “get back” year because he’ll have nothing to show for 2020. If Thurman waits until 2021 before he fights again, he’ll have been out of the ring for two years. That’s a long time for Thurman to be out of action. He already missed two years of his career from 2017 to 2019 due to his elbow and hand injury.

“With him having two titles, we would unify the welterweight division with our match-up,” said Thurman on Spence. “Deep down, there’s still a part of me that wants to grab his belts.

It’s likely that Thurman won’t take the fight with Spence even if he gives him the shot on a silver platter. What Thurman wants is a rematch with Pacquiao because that gives him a chance for a big payday while at the same time giving him the opportunity to win back his WBA welterweight title.

Danny Garcia could be next for Spence

Spence could be defending against Danny Garcia (36-2, 21 KOs) next after the lockdown. Garcia, 32, is still holding out hope that he can get a fight against Pacquiao. But Danny strikes out with his attempt at getting the former eight-division world champion Pacquiao to defend against him; then he’ll face Spence.

Garcia would be getting the title shot against Spence based on his past accomplishments rather than on what he’s done lately, which is very little. Shawn Porter beat Danny Garcia by a 12 round unanimous decision in 2018.

Since that loss, Danny has come back with two wins over low-level opposition in Adrian Granados and Ivan Redkach.