Can the Boxing Purists ever make Peace with Deontay Wilder? 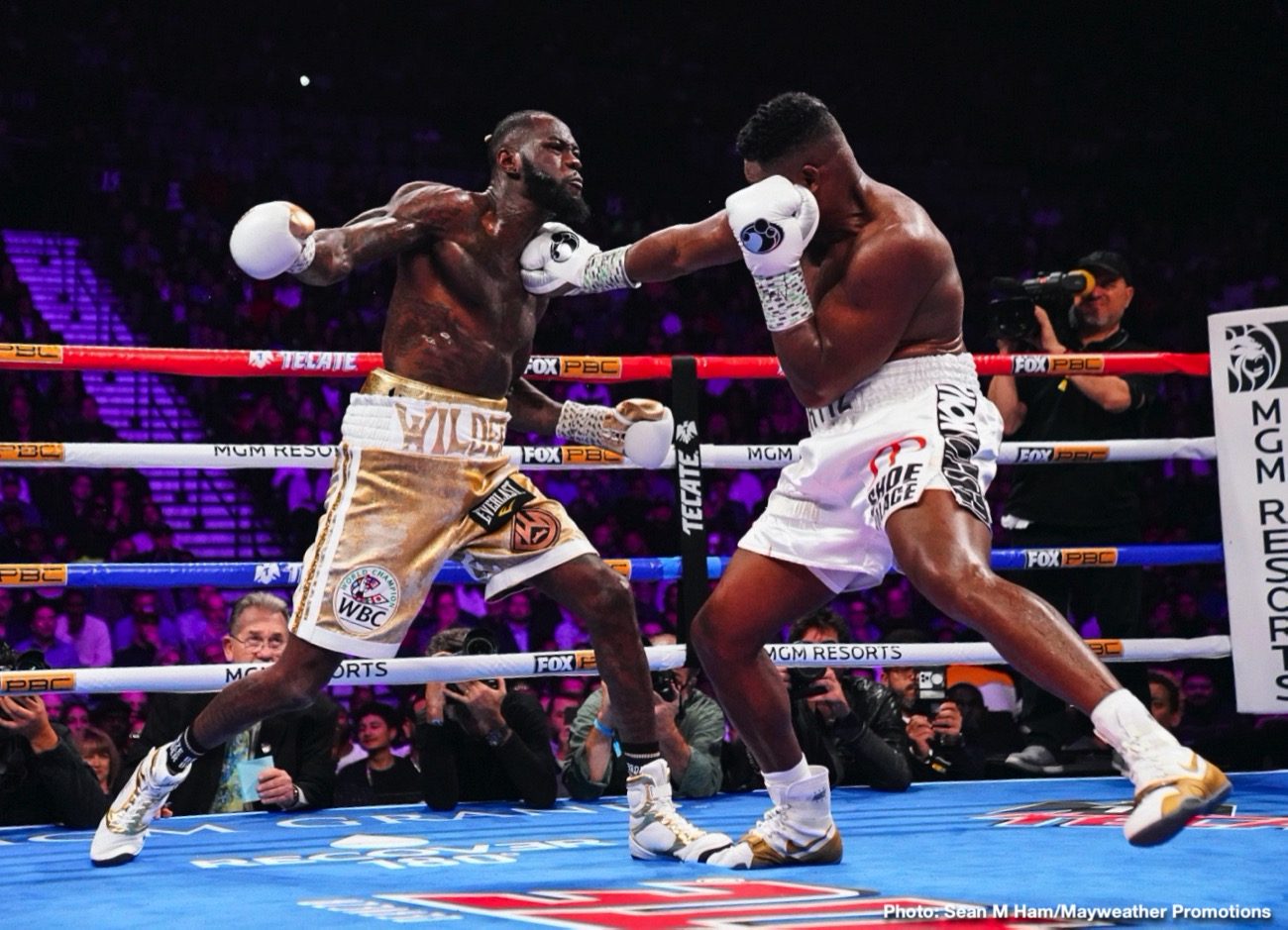 By Joseph Hirsch: The comedian Rodney Dangerfield was famous for his catchphrase, “I don’t get no respect.” The man behind the act was always careful to point out, however, that contrary to the personality he’d created, he did in fact get a lot of respect.

Deontay “the Bronze Bomber” Wilder is still wondering, in the wake of his win over Luis “King Kong” Ortiz, when those who previously hated him or dismissed him are going to be won over to his cause, however begrudgingly.

True, Wilder started by devastating guys who were barely household names in their own households, but after that he moved on to doing demolition jobs against worthy, rugged journeymen, some gatekeepers, contenders, and has now dispatched a foe held in common with former champion Anthony “AJ” Joshua in Dominic Breazeale (destroying his man much faster than Joshua). He held mastermind mover-boxer Tyson Fury to a (controversial) draw, and has now twice beaten an extremely-skilled, heavily-avoided Cuban southpaw who’s a high-risk, low-reward outing whom most of the top guys have swerved. Wilder could have swerved, as well, having legitimate grounds to avoid Ortiz (failed PED testing) but he took the hard route. Twice.

Wilder’s harshest critics are of two camps: first are the understandably AJ-loyal British fans who much prefer Joshua’s well-rounded jab-centric style and his half-cockney, half-polished PR man out-of-the-ring persona. They find Wilder’s longwinded, tent revival preacher theatrics, extended grandstanding speeches, and claims to wanting to literally kill a man in the ring to be off-putting, to say the least (they seemed to have no problem with Mike Tyson expressing his desire to eat his opponents’ children or to jam their nose-bones into their brains, though). And then there are the purists, those who would prefer to watch highlight reels of Pernell Whitaker’s backfoot maneuvers around the squared circle for thirty-six minutes as opposed to watching a highlight reel of Wilder’s knockouts of nigh-on biblical destruction.

Even those boxing aficionados who fall into these two camps (and I know a few British boxing fans and some purists here stateside) have been forced to concede, though, that Wilder carries that equalizer in the right hand, and they’ve willing to say as much as far back as Wilder’s flattening of previous distance dance partner Bermane Stiverne. Recall their rematch in which a KO’d Stiverne was left looking crucified and sound asleep with his head propped against the bottom rope and referee Arthur Mercante Jr. got flung like a virtual ragdoll as he attempted to pull Wilder away from his utterly destroyed foe.

Wilder was expected to shellac Stiverne though (albeit not in such dramatic and quick fashion), so Wilder’s naysayers could call that luck and sound half-credible saying it.

But luck and power did not put Tyson Fury on the floor twice (the second knockdown being the one in which Fury was literally one second away from his first professional defeat); and neither luck nor power alone gave Wilder his first win against Ortiz, or cemented his superiority to the very good Cuban southpaw in the second of their brace of fights.

So if it isn’t just power that’s allowed Wilder to stake his claim to King in the Land of the Giants, then what is it? What has enabled him to make the leap through each stage of development, from the fringes to the pinnacle of boxing’s glamour division?

In brief, he’s learned quite a bit on the job, just as previous greats who were despised by purists also learned on the job.

Deontay Wilder doesn’t have much in common with the late, great “Brockton Blockbuster” Rocky Marciano, especially not when it comes to their reaches (the difference in their wingspans being larger than my young nephew standing on a pile of phonebooks). Both men, though, were late bloomers due to devoting themselves to other sports before ending up in boxing. The Brockton Blockbuster wanted to be a pro-baseball player before being sidelined by an injury that forced him to change plans; for Wilder, he was torn between basketball and football, but had to abandon dreams of rolling with the Crimson Tide in his native Alabama due to life happening to him (the birth of a daughter and poor grades while at Tuscaloosa Central). Both the Rock and the Bronze Bomber also developed in spite of lusty boos from the purists who scoffed and sometimes even laughed when they missed with their big shots, before finetuning their respective games.

Don’t take my word for it, though. Watch their transformations side-by-side. Find footage of Rocky Marciano stumbling his way toward Rex Layne in their 1951 melee, holding his right hand, the dreaded “Susie Q” that practically liquified Jersey Joe Walcott’s face and sent Joe Louis through the ropes and into his sunset years of a second and permanent retirement. Observe how clumsily Marciano carries that right hand, loading it up and practically lugging it at his side like a caveman dragging his club, winging that cudgel until it connects. Then watch the much-improved and retooled Rock of ’52 in his tilt against Al Matthews in Yankee Stadium. He still loads up, but is not bent so far at the waist, and when he loads now it’s with the left to confuse Matthews, who was expecting the end to come from the much-vaunted right.

Something similar happened with Wilder between his second fight with Bermane Stiverne and his second meeting with Ortiz. Forget the knockout and study the footage leading up to the latest KO. Watch as Wilder first probes ultra-tentatively with a barely-there jab, modulates it just so, then works up just enough force in his left to make it touch Ortiz’s lead glove, giving the impression of a slightly higher stakes game of pattycake. Then, seemingly from nowhere, the right is landed; it’s not the wide right that’s earned Wilder the “Windmill” moniker from his detractors. It’s a straight shot that’s as true as something out of Joe Gans’s playbook.

And that goodnight right that Wilder landed was set up with a wonderful bit of misdirection, the kind that legendary trainer Cus D’Amato once compared to the act of a three-card monte hustler. It sounds simple, and is simple to describe, but is in point-of-fact quite hard to execute: In order to make the mark part with his money (or the boxer separate with his senses) you must get his concentration away from what you are actually doing, and force him to use his powers of concentration, which may be great, but to use them in the wrong way.

The better boxer, as light-heavyweight champ Jose Torres once said, is the better liar.

Deontay Wilder is never going to be confused with Vasyl Lomachenko or Terence Crawford, but he has, like those smaller (and technically more skillful) men learned that if he is going to start slow, and rely on his power into the championship rounds, he should use those early rounds he’s going to lose to study and download, rather than just chase with the big power punch loaded so heavily his hand practically quakes like that of a videogame character waiting to throw a fireball.

Everyone has always known Deontay Wilder had power. Even his harshest critics have now been forced to admit it, or are left with the burden of denying something as blindingly obvious as the simple truth that night follows day. What’s changed in Wilder’s maturation from fistic novice to world-titlist on a streak of historic defenses is that he has learned, ultimately to watch and wait. A reckless puncher who carries his power to the last bell is a nightmarish proposition even for the most switched-on, creative and mobile pure boxer in the world (since anyone can get caught clean at least once by a man who has faith in his power and refuses to be discouraged).

Someone with that power who’s managed to refine his skillset is a truly terrifying proposition.

I’m not saying that Deontay Wilder is about to go on a multi-year unified (or partially unified) reign, because the division is quite deep with talent, and it’s a weight class where one moment’s bad luck is enough to end to any man’s reign at the top.

Andy Ruiz has the fastest hands in the division and is the best inside fighter, and Tyson Fury (depending on which one shows up) can mentally undo nearly any man in the ring as easily as he spins his web of words in a press conference; Anthony Joshua will either rise to the occasion this weekend against Ruiz, or he won’t. But if he does, he will be a much mentally stronger version of himself than the one whose path was until-now star-crossed with that of Deontay Wilder. And if the men meet it will probably be the hardest fight of both their lives.

And I haven’t even mentioned the pride of young lions waiting in the grasses: Michael Hunter (son of Mike “the Bounty” Hunter) whose on-the-job steep learning curve reminds me quite a bit of Wilder’s; the ultra-slick cruiser kingpin Oleksandr Usyk (a sort of Lomachenko rescaled for the 200 lbs. and up division); or Joe Joyce, whose style looks a bit plodding and slow, but whose punches keep finding a home (champs criticized for being slow include both Charles “Sonny” Liston and “Big” George Foreman, so if Joyce looks a little ponderous here and there, he’s in good company).

Yes, anything can happen on any given night in boxing, especially among the heavyweights. But if you were looking for a time when Deontay Wilder was at his most vulnerable, ripe to be rolled (a fresh face in the city who thought he might earn some money from the crooked Three-Card Monte game on the corner), you’re too late.

He’s learned quite a bit in the last few fights.

And is still learning.

Joseph Hirsch is the author of the boxing novel My Tired Shadow, which can be bought here.