Canelo needs to beat GGG decisively to be #1 – Ray Mancini

By Dan Ambrose: Ray ‘Boom Boom’ Mancini says Saul Canelo Alvarez needs to fight Gennadiy ‘GGG’ Golovkin a third time and beat him in a CONCLUSIVE manner if he wants to be rated #1 pound-for-pound, because their two previous fights were too controversial to say he’s worthy of the top spot.

Canelo has failed to beat the best champions without controversy

One of the main arguments fans have for why Canelo doesn’t deserve to be rated #1 pound-for-pound is the level of his opposition. His 2 fights with GGG failed to show that he’s better than him. When Canelo moved up to 168, he fought the weakest of the champions in Rocky Fielding. Canelo did the same thing at 175 in taking on WBO champion Sergey Kovalev rather than IBF/WBC unified champ Artur Beterbiev or WBA belt holder Dmitry Bivol.

At 154, Canelo beat welterweight Matthew Hatton to win the WBC junior middleweight title. The World Boxing Council sanctioned the fight for their 154-lb title despite Hatton being little more than a fringe contender at 147, and never having fought at 154. Canelo has never TRULY beaten the best. It’s hard to see Canelo as #1 without him having won titles – without controversy – against the talented fighters. At 160, Canelo still hasn’t fought Jermall Charlo and Demetrius Andrade, and a lot of boxing fans believe he’s ducking them for fear of getting beat.

Unfortunately, it doesn’t look like Canelo will face GGG a third time, since the Mexican star has said repeatedly that ‘it’s no challenge’ to him in facing him again. He feels that he beat Golovkin TWICE, and that he would have no problems beating him a third time. However, Canelo has also said that if a third fight with GGG made good “business sense,” he might face him.

It’s unclear what Canelo means by that, being that he’s already getting $365 million from DAZN for his 11-fight contract. Does Canelo want DAZN to sweeten the deal and give him MORE for third fight with Golovkin? DAZN likely assumed that the money they were paying Canelo covered a third fight fight with Golovkin, but that might not be the case. Canelo looks like he wants more.

Former lightweight world champion Mancini says NO ONE thought Canelo deserved the win over Golovkin (40-1-1, 35 KOs) in their first fight in September 2017 in Las Vegas, Nevada. That was the fight in which the 3 judges turned in a set of odd scores that didn’t match had taken place inside the ring.

One judge had Canelo winning 10 rounds 2 in a score that was later laughed at by boxing fans. Another judge had it even even 114-114, and this guy gave round 7 to Canelo. Many boxing fans believe the 7th was easily the best round of the fight for Golovkin.

“It’s hard to name a fighter No.1, Because there are a lot of other guys,” said Mancini said to Fighthub. “I like [Naoya] Inoue. To me, Inoue and Luis Nery are in the top five. We were talking about Errol Spence, but Bud Crawford, certainly. I think Canelo, but he’s not No.1, but he’s in that top 10. [Canelo is] Not number #1, but he’s in the top #5. No doubt,” Mancini said of Canelo.

The way Canelo’s two fights with GGG played out, he didn’t prove that he was better than him in either of them, and that’s disappointing. The way that Canelo’s promoters at Golden Boy Promotions have been calling him the best fighter in boxing, you would expect much better. Canelo didn’t Golovkin until he was 35-years-old, and then he failed to beat him in a fight that boxing fans called a robbery.

Canelo was in his prime at 28, and he STILL couldn’t beat Golovkin. It’s a fight that Golovkin wanted when he was 32, but he didn’t get it until he was 35. The excuse from Golden Boy Promotions is Canelo had to grown into middleweight. With Canelo not having his fight night weights revealed by HBO, some believed that he was rehydrating to the 170s, which meant that he was the same size as Golovkin. If Canelo was just as big as GGG all along, then it takes away his excuse for hy he waited 3 years before facing him. That furthers the belief some fans have that Canelo chose to age GGG before fighting him.

Canelo’s win over Golovkin was questionable

If that was the rationale for WHY Canelo waited a year to finally face GGG again, it failed to work. Golovkin came back strong in the 2nd half of that fight, and appeared to have done enough to earn a draw. However, the judges gave Canelo a controversial 12 round majority decision by the scores 115-113, 115-113, 114-114. What’s interesting is the fight took place not only in the same city as the first match in Las Vegas, but in the same venue at the T-Mobile Arena.

A lot of boxing fans didn’t like that, feeling that Canelo was once again saved by the judges to avoid a draw. What’s clear though is Canelo had gassed out badly in the second half of the fight.

“A lot of good fighters, it’s hard to call one guy pound-for-pound no. 1 but Canelo is in top 5,” Mancini said. “The first [Canelo vs. GGG] fight, I don’t think anybody thought he [Canelo] won that fight. The fight was close, but I still don’t think he won the fight.”

Mancini is right about boxing fans not viewing Canelo as having won the first fight with GGG in 2017. The scoring for that fight was all over the place. It didn’t put Canelo in a good light that he was given a draw that he didn’t deserve. Golovkin had the aggressor the entire fight. He arguably beat Canelo even more decisively than Floyd Mayweather Jr. had in 2013.

The judges didn’t appear to give Golovkin credit for the way he was picking Canelo off with head-snapping jabs the entire fight.

“I’m not knocking him. He’s a great fighter. I just don’t think he won two fights,” Mancini said about Canelo’s two fights with Gennady. “So bring it back. After fight #2, they should have brought it back right away, but he didn’t. He then went on, and beat these other guys [Daniel] Jacobs, and Kovalev.

Mancini is being kind by saying that Canelo didn’t beat GGG twice. Many boxing fans would go further by saying he NEVER beat him, period. The way those two fights played out, it Golovkin should be up 1-0-1.

Canelo has shown that his youth and his hype wasn’t enough for him to beat a Golovkin his mid-30s. There’s nothing wrong with Canelo being the inferior fighter than GGG, as the Kazakhstan talent has done amazing things.

“I admire him [Canelo] for what he accomplished. He’s a terrific fighter, a great fighter,” said Mancini. “But that to me, come back and and fight GGG a third time, and beat him emphatically and decisively, you go right up to #1 and #2.

“There’s still controversy. Let’s do it a third. Why wouldn’t they do a third? If this was Ray Robinson and Jake LaMotta, they’d come right back and do it,” Mancini said.

Obviously, Canelo isn’t following in the footsteps of legends like Ray Robinson and Jake Lamotta. Those guys didn’t use catchweights and rehydration clauses in their fights, and they had no qualms of facing each other repeatedly. Robinson and Lamotta fought each other SIX times in their careers. Canelo has shown no interest in fighting GGG even a third time, and he doesn’t seem to care about the controversy.

“Canelo is a terrific fighter. He should go right back in there [with GGG], but [Oscar] De La Hoya wouldn’t allow it to happen,” sais Mancini.

‘Boom Boom’ Mancini doesn’t say why Golden Boy Promotions CEO Oscar De La Hoya won’t allow Canelo to fight GGG a third time. It could be that he’s worried that he’ll lose – again. There’s also the possibility that De La Hoya is worried about Canelo’s career being shortened due to the punishment he would take in a third fight.

Golovkin landed a lot of hard head shots on Canelo in their rematch.  For those who don’t remember, Israel Vazquez and Rafael Marquez were never the same fighters after facing each other 4 times. Their first three fights were wars. Is De La Hoya concerned about Canelo’s career being shortened?

“Kovalev, if he threw it, he’s not going to take an a– whipping like that to throw a fight,” said Mancini in responding to the lions of boxing fans saying that Kovalev vs. Caneo was a STAGED fight. “He got hurt bad. I just think he fought a guy with the wrong style as him.

“I just thought Kovalev’s jab would dictate the fight just like GGG, because Kovalev has a better jab than GGG, but he was just kind of leaving it out there. He wasn’t throwing his right hand with not conviction. He just walked him down. Canelo had his hands up tight by his head,” said Mancini.

It doesn’t matter what Mancini thinks about with his opinion that Kovalev didn’t throw the fight. The perception a lot of boxing fans have is the Canelo vs. Kovalev fight looked stated. It was a mistake in the first place for Canelo to fight the over-the-hill looking Kovalev.

The Russian fighter looked so bad in his previous match against Anthony Yarde. Canelo choosing to fight Kovalev after that match it appear that he was just cherry picking an easy belt. If Canelo had opted to face Beterbiev or Bivol, he likely have had fans complaining. Those guys would likely have beaten Canelo.

Kovalev should have made adjustments against Canelo

“I realize that Kovalev was hitting him a lot on top of the head. And I just don’t understand why Kovalev didn’t change it up and come up with an uppercut or step to the side. He didn’t do any of that. Maybe the pressure got to him? Yeah, but then you’re doing it for all the wrong reasons, and that’s what happens,” said Mancini about Kovlev taking the fight with Canelo for money despite him saying that he didn’t believe he could win.

“If you take a fight for the money rather than for what you love, then you get your a– whipped like he did. What does money mean if you can’t count if afterwards. If you get your brain rattled enough to where you can’t count, then what does it mean? Yeah, for your family [financial security], but I think your family would rather have you,” said Mancini.

Kovalev fought like he didn’t trust his gas tank, and wasn’t willing to put out a lot of effort. What was surprising is that Kovalev STILL gassed out in the 11th round. 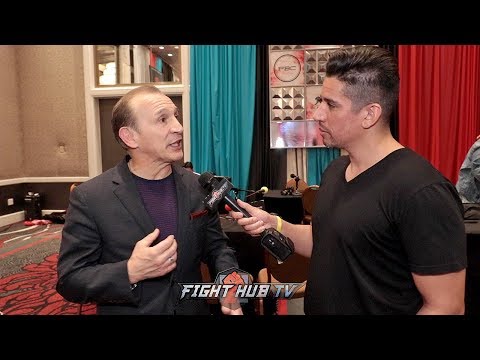 Can the Boxing Purists ever make Peace with Deontay Wilder? »