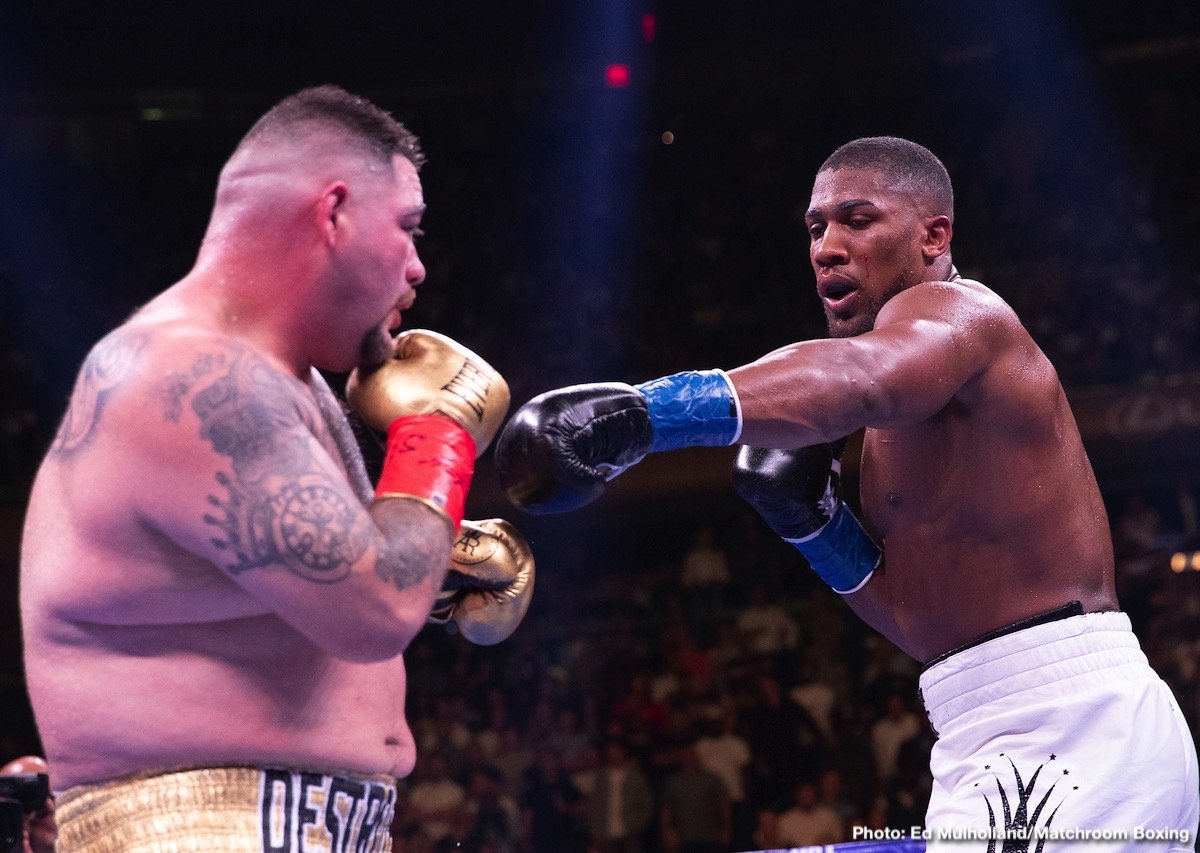 By Scott Gilfoid: Still sounding like he’s in charge despite his one-sided loss in the first fight, Anthony Joshua says he’s going to take center ring to defeat Andy Ruiz Jr. this Saturday. Unfortunately, this is the same wretched plan that the British heavyweight tried with no success last June against Andy, and it worked HORRIBLY.

Showing that he’s not learned from his embarrassing 7th round knockout defeat against the American, Joshua plans on using the same tired game plan for the rematch with Ruiz Jr. on Saturday at the Diriyah Arena, Diriyah, Saudi Arabia.

“Take centre. Sometimes you haven’t gotta be running around the ring,” said Joshua in giving away his game plan for the Ruiz rematch. “I asked him [Ruiz], ‘How do I beat you?’ He goes, ‘You should move around‘… We have to engage to win, I’m going to engage to my benefit. Educated engagement,” said Joshua in sounding more than a little pretentious.

It’s interesting that Joshua hasn’t learned from his loss to Ruiz, but also not surprising. I mean, AJ didn’t dump trainer Rob McCraken like he was advised to by boxing fans, so he’s not gotten any new ideas. He’s stuck in the past with the old flawed tactics given to him by McCracken, and for that reason it’s not unusual that he thinks  he can use the same game plan against Ruiz.

Joshua’s inability to adapt for the Ruiz rematch spells DOOM for the 2012 Olympic gold medalist. If Joshua gets blasted out, he’ll be a textbook case for what happens to fighters that fail to retool their games after a loss. It wouldn’t be a big deal if Joshua’s wily promoter Eddie Hearn had scheduled him to fight another fodder opponent, but that’s not the case. I’m sure Hearn would have picked out a soft opponent.

Joshua’s chance of survival against Ruiz are slim if he chooses to take center for the rematch. Ruiz is too fast, and he’ll encircle Joshua like it’s his last stand, and massacre him in short order. Joshua’s only real shot at winning it to try and move around the ring, and jab as much as possible. The thing is, Joshua gets tired from even jabbing. He cannot jab for any length of time without growing fatigue.

Joshua says he has “NO FEAR” of Ruiz

“There is no fear in my heart, my eyes or my mind,” said Joshua.”I didn’t lose any commitment. I had to own the situation and make it work for me. You always need a challenger’s mind-set. I said that with the belts around my waist,” said Joshua.

It sounds like Joshua is babbling, hoping he can intimidate Ruiz. He’s saying a lot of stuff to try and convince himself that he can win. Gilfoid doesnt think Joshua truly believes he can beat Ruiz, and he’s just saying stuff hoping it will bolster his shaky confidence.

When it gets to the point where a fighter is talking to inflate their ego enough to win, it’s too late. They’ve already lost. Joshua might as well start planning on how to rebuild after this defeat.

“Will it be a special moment [if he wins]?” said Joshua. “No, because I know I belong there. When I regain the belts I will keep cool, and keep a challenger’s mind-set and move onto the next target.”

Is Joshua deceiving himself?

It sounds like Joshua doesn’t want to admit to himself that he’s about to lose again, and his once promising career will be on the brink of implosion. Joshua can be rebuilt to continue a money maker for Hearn, but his days of being a heavyweight world champion will be done. Joshua will look bad if he loses to Ruiz, and then targets WBC heavyweight champion Deontay Wilder in hopes of finding success with him. That would be a weak move on Joshua’s part, wouldn’t it?