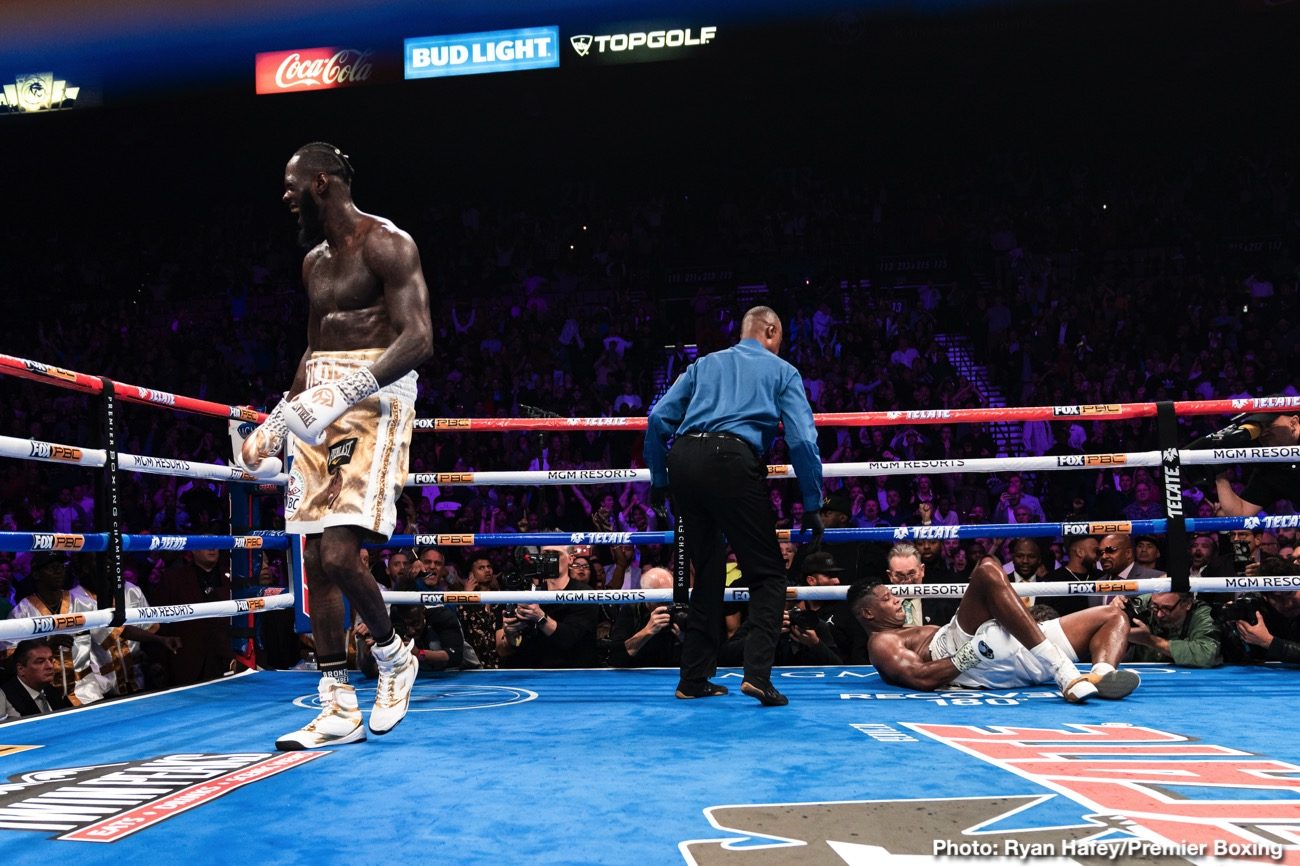 WBC Heavyweight World Champion Deontay “The Bronze Bomber” Wilder continued his title reign with a one-punch knockout victory over Luis “King Kong” Ortiz in the seventh round of their rematch Saturday night that headlined a FOX Sports PBC Pay-Per-View from the MGM Grand Garden Arena in Las Vegas.

Wilder made his 10th consecutive successful title defense, tying him with Joe Louis, Muhammad Ali, Mike Tyson, Larry Holmes, Tommy Burns and Vitali and Wladimir Klitschko as the only heavyweight champions to achieve that feat.

In a rematch of their epic 2018 fight that saw Wilder rally back from nearly being stopped to knock out Ortiz in round 10, the fight again saw both men hold the momentum of the fight at different times.

Ortiz controlled much of the action of the fight as he sought to become the first Cuban heavyweight champion in history. Wilder was not very active in the early rounds, while Ortiz was able to effectively jab, move and throw overhand lefts to rack up rounds on the scorecard.

“With Ortiz, you can see why no other heavyweight wants to fight him,” said Wilder. “He’s very crafty, he moves strategically and his intellect is very high. I had to measure him in certain places.”

Much of Wilder’s attack throughout the first six rounds was centered on his jab and a sweeping left hook that didn’t seem to land cleanly until early in round seven. With the seventh round waning, Wilder used a feint and a straight right cross to put Ortiz down, the first time he had been hurt at all in the fight.

“I had to go in and out and finally I found my measurement,” said Wilder. “I saw the shot and I took it. My intellect is very high in the ring and no one gives me credit for me. I think I buzzed him with a left hook earlier in the round and I took it from there.”

While Ortiz was able to get to his feet, referee Kenny Bayless waived off the bout at 2:51 into the seventh round. Ortiz led on all three scorecards, by margins of 58-56 and 59-55 twice. According to CompuBox, Ortiz out landed Wilder 35 to 34, with a 28 to 17 advantage in power punches.

“This is boxing,” said Ortiz. “I said that one of us was going to get knocked out and it wasn’t going to go 12 rounds. I was clear headed when I hit the canvas. When I heard the referee say seven I was trying to get up, but I guess the count went a little quicker than I thought.

“This was a great fight and I thought I was clearly winning,” continued Ortiz. “I got caught with a big shot and I have to give Deontay Wilder a lot of credit. I knew my movement was giving him problems. I landed some big shots and I thought I had him hurt. I thought I was up by the count and could have continued.”

In the ring following the fight, Ortiz asserted that he will continue his quest for a heavyweight championship.

“Deontay showed great will and I’m not ashamed with my performance,” said Ortiz. “I know I can beat anyone in the heavyweight division. My career is not over. I’m going to work my way back into a big fight.”

After the fight, Wilder told FOX Sports’ Heidi Androl that his goal is to unify the heavyweight division and become undisputed champion.

“Winning this title means the world to me,” said Santa Cruz. “This is all for the fans who support me. I didn’t feel myself today and didn’t perform the way I wanted to. I’m going to get back in the gym and get a big fight in 2020.”

The action began to heat up in round three, as Santa Cruz began to find a home for his straight right hand that would help him control much of the remainder of the fight. Flores adjusted and used more movement to try to counteract Santa Cruz’s aggression and also focused on countering those right hands with body shots.

“I’m glad I got the victory,” said Santa Cruz. “Miguel is a good fighter, he gave me a tough fight and he proved he’s not a pushover. We put on a great battle.”

“It was a good fight and I showed I belong at this level,” said Flores. “I just went 12 rounds with Leo Santa Cruz. It’s not an accomplishment in itself but I slowed down his pace. Like I said before, it’s not only about throwing punches, but it’s about ring IQ and I showed I have it.”

Despite Flores’ tactics, Santa Cruz was able to stay in control and frustrate his opponent. Flores was deducted a point by referee Tony Weeks in round eight due to excessive holding during the many exchanges.

“It was a close fight and I didn’t think he was landing too much,” said Flores. “He was busy but he wasn’t landing too many shots. I landed cleaner harder shots but he was just busier.”

Flores continued to try to rough up Santa Cruz and accidentally hit him with a headbutt in the ninth round that opened up a cut over Santa Cruz’s left eye. The four-division champion was able to weather that cut and finished strong on his way to a unanimous decision by scores of 115-112 and 117-110 twice.

“I think I did win the fight,” said Figueroa. “He put on a lot of pressure, but I fought better in the early rounds and I finished strong.”

Figueroa started the fight in control, closing down the distance early and using his activity and combinations to take early control of the action. Ceja’s strategy early was to counter his charging opponent, but he soon picked up the aggression to not allow Figueroa’s offensive momentum to grow.

In the middle rounds, Ceja began taking control, landing the more powerful punches while Figueroa continued to come forward, but was not able to land anything that slowed Ceja’s offense.

Figueroa was able to weather the storms in the middle rounds and make it to the late rounds where he again picked up the activity and body attack. He was able to bust Ceja’s lip throughout the action, causing it to swell and bleed.

The punch output was impressive from both fighters, with their 784 combined punches landed good for the fourth most in super bantamweight history, while their 2,811 punches thrown were the second highest, according to CompuBox. Figueroa earned a narrow 411 to 373 advantage in punches landed.

“This fight is for all of you fans who came here to see me,” said Ceja. “He was a man about it and he gave me the fight. I think I won, but I respect the judges’ decision. I’ll definitely run it back in a rematch.”

Ceja was not able to win the title after failing to make the 122-pound limit at Friday’s weigh-in.

“I basically fought a person in a weight class above mine tonight,” said Figueroa. “I’m pretty sure if he weighed 122, it wouldn’t even be a close fight. We have to run the rematch back but he better make the weight.”

“I said before the fight, I wasn’t going to let it go to the judges,” said Ramirez. “The first fight wasn’t a draw. I worked very hard for this and it turned out how I wanted today. I felt his punching power. He’s a good fighter. I came here to fight. Viva Mexico.”

The fight began tactically, with Barthelemy looking to use his reach advantage to work off of his jab, while Ramirez sought to work inside and deliver power punches. In round three, Ramirez began to break through Barthelemy’s defense with a series of hooks late in the round.

Ramirez continued to come forward in round four, pressing Barthelemy and finding additional cracks in his defense. Late in the round, Ramirez broke through with a glancing right hook that he followed up with a perfect straight left that put Barthelemy down.

While Barthelemy was able to get to his feet, referee Russell Mora waived off the bout at 2:59 of the fourth round. Ramirez held a 73 to 52 advantage in punches landed, including 27 in round three and 31 in round four.

“I’ve got no excuses,” said Barthelemy. “The better man won tonight. I had a great camp and I was feeling good. But when I got out there I wasn’t really feeling my best. I turned around to try to walk around and get my feet under me after the knockdown. I wasn’t trying to stop the fight or anything and I thought I could continue. Now I just have to live with it and come back.”

Additional prelims fights featured Tennessee’s Dustin Long (3-1-2, 3 KOs) scoring a knockout of Marsellos Wilder (5-2, 2 KOs) with a left hook that ended the fight 1:51 into the fourth round. Watch the highlight HERE. The opening bout of prelims saw Ukraine’s Viktor Slavinskyi (11-0-1, 6 KOs) earn a unanimous decision over Mexico’s Rigoberto Hermosillo (11-2-1, 8 KOs) after six rounds of super featherweight action by scores of 60-54, 59-55 and 58-56.

Ortiz: I was clearly winning against Wilder »