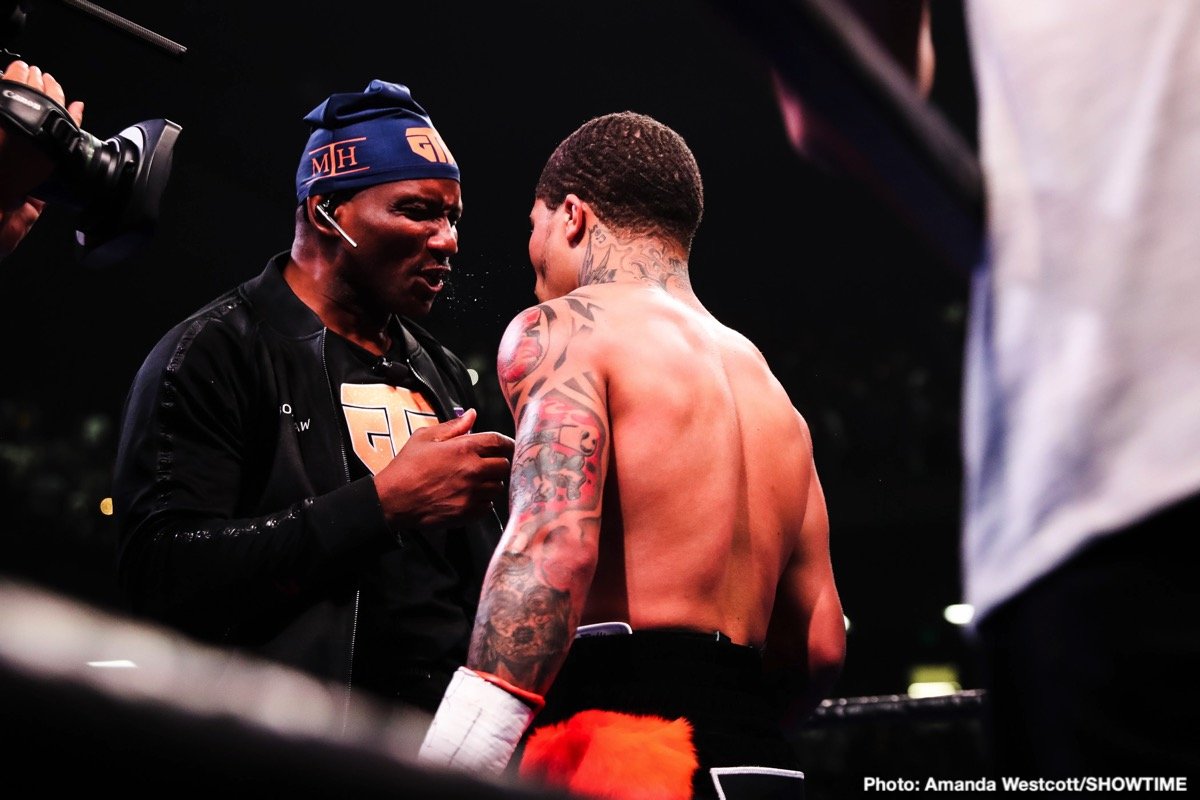 By Allan Fox: Leonard Ellerbe of Mayweather Promotions is making it clear that Gervonta Davis is NOT the mandatory challenger to WBC lightweight champion Devin Haney. Ellerbe says if any of the guys like Haney want to fight the unbeaten Tank Davis (22-0, 21 KOs), then they need to get in line.

Ellerbe says Davis is a world champion, and he’s nobodies mandatory. One gets the sense from listening to Ellerbe, that even if Davis was the mandatory for WBC champion Haney (24-0, 15 KOs), he wouldn’t fight him. Mayweather Promotions are going to move Davis as they see fit.

Right now, Davis is facing 37-year-old Yuriorkis Gamboa next on December 28 in Atlanta, Georgia. Those two are fighting for the vacant WBA ‘regular’ lightweight title. Davis could challenge Haney for his WBC title if he wanted, but instead he’s opting to go after the vacant WBA secondary lightweight strap against Gamboa.

“Tank is the man. Anywhere he goes, he’s the guy,” said Ellerbe to Fino Boxing about Gervonta Davis. “With him [Tank Davis] going to 135, he instantly becomes the guy to beat in the division, period. I honestly don’t have an opinion about it [Lomachenko being named Franchise champion], because it doesn’t have anything to do with any of my fighters at the moment.

“I think I would make an informed decision when that view is presented. But I’m a firm believer that fighters win titles in the ring. I’ve done quite a bit of homework on it, and none of my fighters have been faced with that. It’s a difficult question to answer. Let me be clear on this. Tank is a world champion, and he’s nobodies mandatory,” said Ellerbe.

It’s interesting the way that Ellerbe sounds so irritated when being asked about Tank Davis being the mandatory for Haney. He makes it sound like it’s a bad thing for some reason. Obviously, Mayweather Promotions wants to be able to move Davis like he’s a chess piece.

They’ve been real careful with him since he turned pro, and he’s still not faced his first quality opponent. The way that Ellerbe is talking, he’s not going to match Gervonta against anyone that is a threat to him like Haney. That’s too bad because he’ll just be a belt holder during his career unless Mayweather Promotions takes chances with him.

“Any way you look at it, Tank isn’t nobodies mandatory. He’s calling all the shots at any and everything we do. All these guys can get in line. No one is telling us what to do. We’re doing things the way we want to do. Everybody is open season. Any and everybody can get it at 35 and at 30,” said Ellerbe.

Davis hasn’t fought anyone to where you can say he called the shots on that one. They’ve made a big deal about the Tevin Farmer fight, and that match still hasn’t happened. That should be an easy fight if they were willing to make it.

“Sure, Tank can still make 30,” said Ellerbe when asked if Gervonta would move down to 130 to fight Leo Santa Cruz if the offer was there for a fight. “Moving to 135 is just another opportunity for him to do something different and to think outside the box. He wants to be a multiple champion in different weight classes, and it’s another great opportunity. Tank is at the tender age of 25,” said Ellerbe.

Santa Cruz has already said he wants to fight Tank Davis soon. We’ll see if that fight ever happens. It wouldn’t be surprised if the two stay in their separate lanes.

“He ain’t going nowhere. If they say this guy is the top guy, meaning the fans. And we’re not talking about the small little circle of boxing fans. We’re talking about the fan across the world. What Tank brings is excitement. He puts a—- in the seats, and he’s one of the few fighters out there in the entire world that puts a—- in the seats consistently.

“He’s up there, and there’s only a handful of guys, and I think we all know who they are. And when it comes to the lower weight classes, okay,” said Ellerbe.

Davis does bring in the fans for his fights in Baltimore. Whether he can sell-out elsewhere like Las Vegas is unknown. I’d say probably not. The same goes for New York.

Davis needs to start fighting better opposition if he wants to become a big name, and thus far he’s not doing it. Gamboa would have been a great option for Gervonta if the fight took place in 2007 when the Cuban fighter was at his best. He’s not in his best now, and the fight is considered a mismatch.


« Golovkin vs. Derevyanchenko: Did GGG deserve the win?

Maxwell vs Parker: Connor Parker – I’ll Do A Lomachenko! »