Maxwell vs Parker: Connor Parker – I’ll Do A Lomachenko! 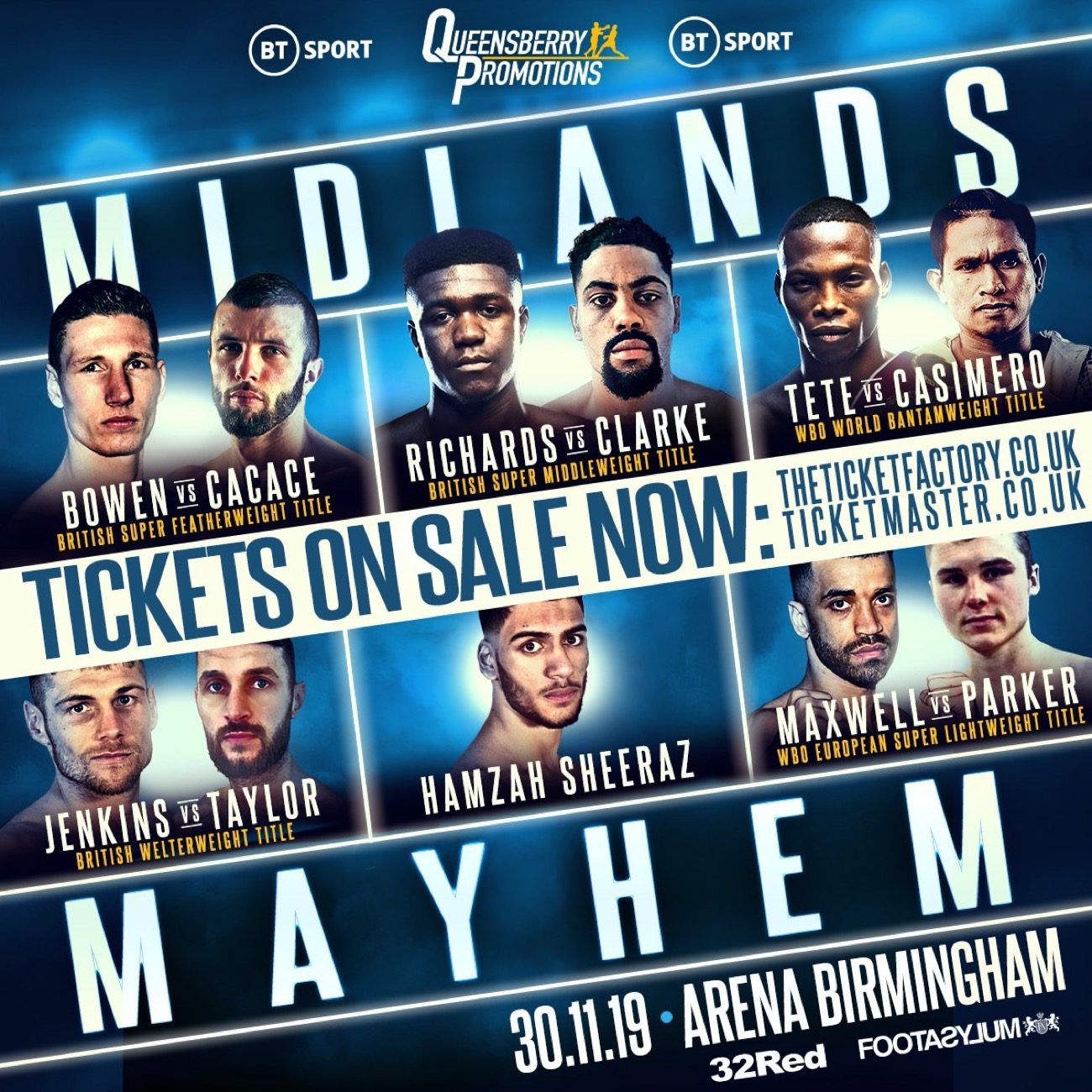 CONNOR PARKER JOKED that he might attempt to carry out an impression of Vasyl Lomachenko when he steps in the ring with Sam Maxwell at Arena, Birmingham on November 30, with Maxwell’s WBO European super lightweight title at stake.

Maxwell, famously, twice fought the great Ukrainian during his amateur days representing Team GB and gave a good account of himself, but ultimately failed to defeat the now pound-for-pound great.

The 24-year-old Parker from Derbyshire and the 31-year-old Scouser share an identical professional record of 12-0, but the East Midlands man accepts it is advantage Maxwell in terms of amateur experience, KOs recorded and being tested over ten rounds as Maxwell was by Sabri Sediri in a helter-skelter battle in March.

For Parker this is opportunity knocking in the Second City and he was happy to place his original fight plans on hold when he got wind of a title tilt.

“I was sat at home when I found out,” said the southpaw. “My dad told me about it then I had to hang on and wait for confirmation. I was so hoping I would get this shot, I had another fight scheduled for a couple of days after, but now I can’t wait for this one.

“It is a massive opportunity and I think I am ready for fights like this. Our records are similar and the only difference is Sam has got more knockouts than me. Record-wise that is the only thing and he has had a tough fight over ten rounds.

“The footage of his fights is all there to see right from his amateur days. He has been around for years, hasn’t he, and there is plenty to pick up on what he does. I might look at the Lomachenko tapes and do an impression of him!”

Parker has just a single stoppage on his ledger but he insists this is a misleading statistic that is down to the limited ambition of the opponents put in front of him. He is happy to back himself in the trading of bombs.

“I’ve boxed my fair share of journeymen and then won a Midlands title in my eighth fight. I beat Kevin Hooper for the Midlands and it was a good win that was because he has been English champion. Since then I have just been keeping busy.

“I’ve won the Midlands and I’ve got to prove myself against better opponents now. Hooper was the first one to really hit me back and I enjoyed it more because he was not just there to survive and, if anything, I felt more comfortable in there. I liked it.

“This show is as much as I could have asked for because, at the minute, not many people know who I am, but after this fight they will know and I can’t wait. If I win this fight it will just get bigger and bigger,” added Parker, who does not underestimate the magnitude of the task in front of him.

“I think Sam is a good, technical boxer with a strong back hand. You can tell he is schooled well. I sort of take something from the way Sabri Sediri got to him but it could have just been and off-night and we need to prepare for the best Sam possible and that is what we will be doing.

“True, he got put down two or three times and you do take confidence from it, but I am preparing for a hard fight. My record doesn’t suggest it, but I can punch.”

SAM MAXWELL HAS put the leading super lightweights on notice that he is targeting the big domestic dust-ups in 2020.

The 31-year-old from Liverpool was thrust into the spotlight back in March when he won his first major title in dramatic circumstances with a final round stoppage of Sabri Sediri.

The previously unbeaten Frenchman sent Maxwell south to the canvas in both the first two rounds and rocked the former Team GB star in round ten before choosing to showboat rather than execute a finish.

Maxwell recovered and made the flashy French-based Tunisian pay for playing to the Leicester crowd when a huge right hand laid him spark out and referee Steve Gray ended the spectacular proceedings.

The 12-0 Maxwell was duly crowned WBO European champion and he makes a first defence against the also 12-0 Connor Parker at Arena, Birmingham on November 30.

He would very much like the fight to be the first of many on the domestic front in what is a hugely competitive weight class.

“There will be less drama this time,” insisted Maxwell when reminded of the final round footage that went viral and was seen by millions. “I have promised my missus and myself as well, but it is still going to be entertaining and I will go for the knockout and big shots.

“I wouldn’t change a thing about it though because if I had gone in and just got the win I thought I was going to, I wouldn’t have got the exposure that I did and it was mad. My name is out there now and people know me.

“Now it is Connor Parker, who is a good tidy boxer who has not lost a round, but on November 30 he is going to lose some rounds and get knocked out, definitely.

“At this level everyone can box and move but not many have the power that can change a fight. I’ve got that from the first to last round and I am going to show that on fight night. Again.”

Maxwell was an interested television viewer a couple of weeks ago when Lewis Ritson and Robbie Davies jr squared up in Newcastle, with Ritson prevailing after an entertaining and closely fought scrap.

He hopes to be mixing in such company himself in the not too distant future.

“They were fighting in a world title eliminator and are at near the pinnacle of my weight. It was a great fight, but one where I could see myself getting in with either of them and getting the win.

“Getting past Connor Parker is my main goal at the moment and next year I will be in a position to fight Ritson and Davies and I am confident I can beat them.”

Hamzah Sheeraz will fight for his first major title at super welterweight, with thrilling prospects Dennis McCann, Shabaz Masoud, Eithan James and George Davey also featuring on the bill, along with talents from the local region in Nathan Heaney and River Wilson-Bent.
Tickets are available now from £40 via TheTicketFactory and Ticketmaster

Callum Smith vs. John Ryder this Saturday, Nov.23 on DAZN »