Golovkin vs. Derevyanchenko: Did GGG deserve the win? 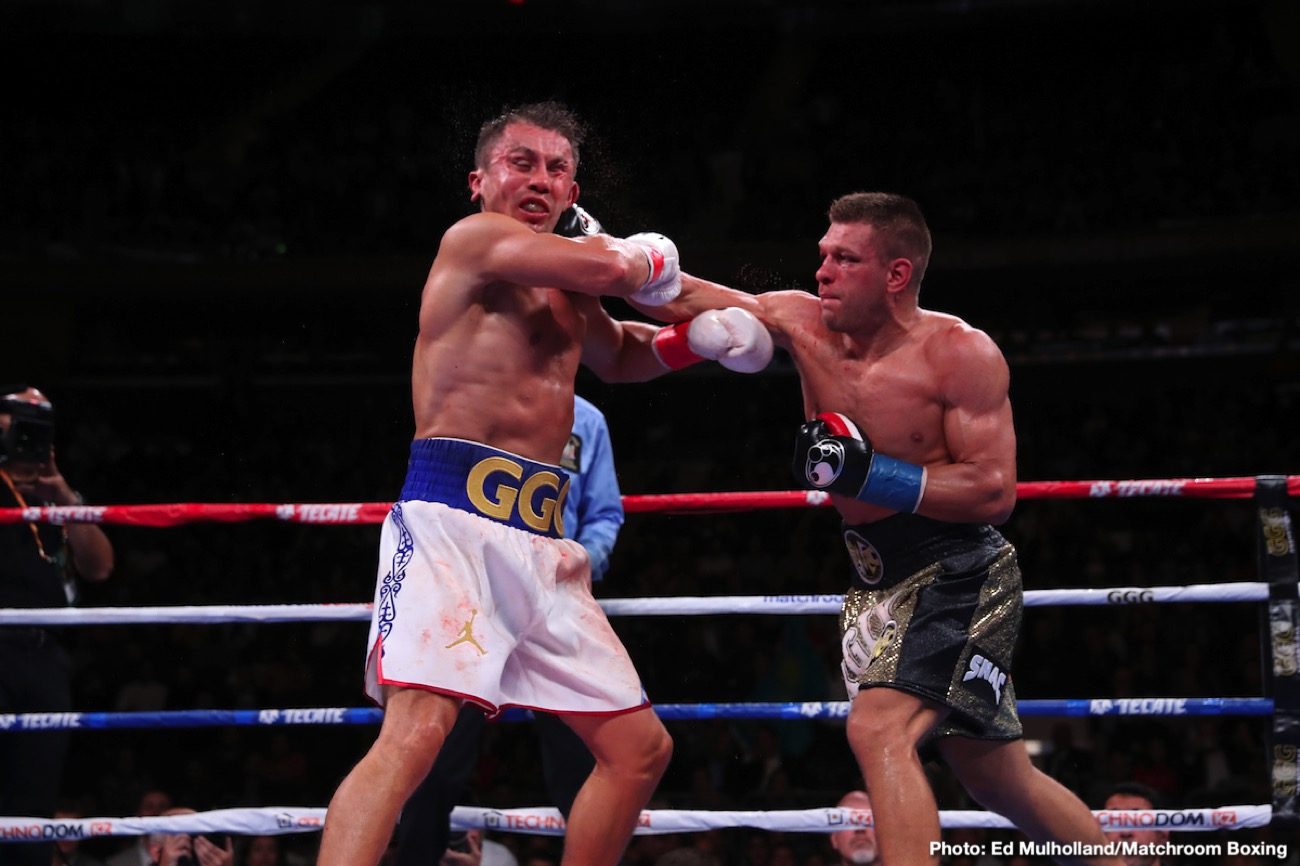 By Barry Holbrook: It’s been a month since Gennadiy Golovkin’s controversial 12 round unanimous decision victory over Sergiy Derevyanchenko on October 5, and there are still people that are labeling it as highway robbery. They thought GGG lost, and was given a win he didn’t deserve.

Former ESPN commentator Teddy Atlas is one of many boxing fans who felt that Derevyanchenko deserved the victory in the fight. He speculates that Golovkin might have gotten the nod with the judges due to the HUGE contract that he has with DAZN.

Atlas says that there were talk of Golovkin being sick the week of the fight, but he’s not sure if that was the issue. It could be the 37-year-old Golovkin’s advanced age.

“First of all he did look a little gassed, but he behaved like a champion throughout,” said Atlas on THE FIGHT with Teddy Atlas in looking back at Golovkin’s win over Derevyanchenko. “He was breathing heavy, and he didn’t stop digging down. When he had to throw more punches, and more hard punches, and he still did. He was breathing heavy, and the other guy [Derevyanchenko] was.

“So there was a rumor that he was sick, and so that could have been it. Again, people don’t know what goes on behind the curtains, the things that they don’t know, and they’re never going to know. Things can happen. A guy can get sick, this can happen, that can happen, and you don’t want to say it because it sounds like an excuse.

“Golovkin’s not the type of guy to make excuses. He’s a champion, and he’s a fighter. The other guy is too, Derevyanchenko. Give him all the credit. He behaved like one, and he acted like one, both as a person that you could cheer for. No crap after that. He went in there, did his job, and didn’t complain, said Atlas about Golovkin.

GGG looked gassed from the early rounds of the fight, but Derevyanchenko’s body punching was a factor. Derevyanchenko attacked Golovkin to the body viciously in the 5th, and had him hurt. The referee got in the way when Derevyanchenko had GGG close to going down, and that may have saved him.

“I thought technically from a technical standpoint, if you were to call me on it, I would say, Derevyanchenko probably could have won the fight,” said Atlas. “I didn’t score the fight, but the way it felt, and the way it looked, I would say that Golovkin landed the harder punches, more significant places, but the other guy [Derevyanchenko] outworked him.

“He landed enough cleaner punches to probably deserve to win, but again, this is boxing,” said Atlas about Derevyanchenko.

A lot of boxing fans did score the Golovkin-Derevyanchenko fight, and they had GGG losing. It was pretty clear that Derevyanchenko took control over the fight from the 5th, and had Golovkin under constant fire from his body shots. The way that Derevyanchenko switched angles to attack GGG’s body, it amazing. No one fights like that in the middleweight division, not even Canelo.

The marquee guy GGG got the win over Derevyanchenko

“The marquee guy is going to most of the time get it. If you’ve noticed, because I know it’s not $365 million, but DAZN gave a lot of money to Golovkin. Whatever it was, they gave a lot of money. What did I say again? Is there a sucker out there that would have bet me that [Sergey] Kovalev would bet me that he would get out of there with a decision over a guy that just got $365 million dollars from the network? Please.

It’s abundantly clear that Golovkin was the A-side in the fight with Derevyanchenko. Whether this was the reason for all three judges giving him the victory is unclear.

The boxing fans at ringside let the judges know what they thought of their scoring by booing Golovkin nonstop from the moment the results were announced until he left the ring. That has to be some kind of record. This writer has never seen a fighter booed nonstop for that long. An embarrassed looking GGG tried to talk to the crowd, but they were having none of it. They thought he lost, and didn’t agree with the scoing.

“I thought he [Derevyanchenko] might have won the fight. But he was a tough guy, he was prepared for that fight, Derevyanchenko,” said Atlas. “Throughout the whole fight, I don’t know if he got old. Maybe he got old, maybe he got sick, maybe it was some things we didn’t know about. But he [Golovkin] kind of looked like, I’m going through a nature channel again.

“It’s hard to go upstream, and that’s what GGG looked like. He was always going up stream, and it was hard, but he got there,” said Atlas.

Golovkin did look VERY worn out by the end of the fight, and he resembled a losing fighter. This wasn’t the first fight in which Golovkin took a lot of punishment, and looked completely worn at the end. In his second fight Saul Canelo Alvarez last year in September 2018, Golovkin took a beating. Canelo got hit a lot too, but his face wasn’t nearly as beaten up as GGG’s.

Earlier in Golovkin’s career, he fought a war with former IBF light middleweight champion Kassim Ouma in stopping him in the 10th round in June 2011. What was surprising about that fight is how close it was. Golovkin REALLY struggled against a fighter that had been easily beaten by Vanes Martirosyan, Jermain Taylor and Roman Karmazin. The fight with Ouma shouldn’t have been that difficult for GGG.

Derevyanchenko got a good payday

“I think he kind of earned it, but Derevyanchenko also got paid very well,” said Atlas. “So you don’t have to cry for him, but you still want that belt, because you want that hand raised and hear, ‘And new champion of the world.

“I don’t know if it was a fair decision, but I know one thing. He [Golovkin] earned everything that night,” said Atlas. “He was in there with a tough guy [Derevyanchenko], a guy that was ready, and a guy that threw a lot of punches, and a guy who will have another chance to be a world champion, I hope in Derevyanchenko,” Atlas said.

Derevyanchenko will get another chance, but he’ll likely need to work his way into the fight. It’s just a shame that he didn’t get the win against a major star like Golokvkin, because it would have meant a lot of money. Derevyanchenko could have possibly used the victory as a catalyst to get a huge payday against Canelo Alvarez.

A rematch with Golovkin would have made Derevyanchenko a lot of money as well. But the way things are now, Derevyanchenko will likely never get another fight against Golovkin. There’s no reason why GGG will fight him again, because he wants to face Canelo in a trilogy match. He’s not going to risk that by facing Derevyanchenko again.