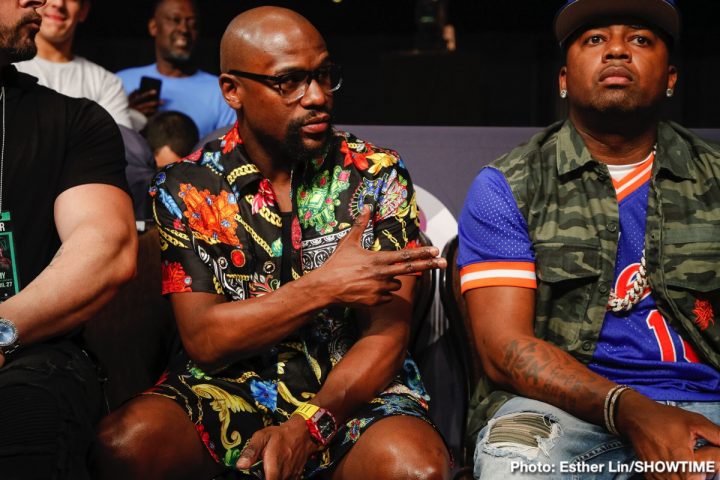 By Raj Parmar: A tweet surfaced today from twitter account Arab News which showed retired superstar Floyd Mayweather saying he is excited to travel to Saudi Arabia to discuss a rematch against rival Manny Pacquiao. This is very surprising news as Mayweather has previously maintained he has no interest in stepping into the ring again to take on Pacquiao or any other fighter.

“It’s an honor to come to Saudi Arabia to sit down with you guys about the Mayweather-Pacquiao rematch,” Mayweather said in the video. “Saudi Arabia, I’m on my way.”

This clip comes on the heels of heavyweight Anthony Joshua engaging in a rematch with Andy Ruiz for the heavyweight title which has been announced in Saudi Arabia. Ruiz upset Joshua in their first fight and the rematch is expected to draw a massive audience.

Mayweather was able to outpoint Pacquiao back in 2015 in the largest grossing fight in history. Although some felt the fight happened a couple of years too late, the matchup generated attention all over the globe and tremendous intrigue as the two best fighters in their generation squared off.

Floyd was recently announced as the greatest fighter ever according to rankings from BoxRec. Mayweather acknowledged the rankings as the truth as he amassed an unblemished 50-0 record with titles in five different weight classes.

Pacquiao was recently able to beat undefeated fighter Keith Thurman in a welterweight title clash where he knocked down Thurman in the first round. Manny seems to be rejuvenated at this point in his career and has been clamoring for a rematch with Floyd.

If the short clip is legitimate and Floyd is seriously considering a return to the ring against Manny, a potential reason may be that there is a vast sum of money on the table for Floyd if he were to accept the rematch. Many boxing fans were surprised when the Joshua-Ruiz rematch landed in Saudi Arabia, and it seems to be that the country is very interested in boxing and willing to shell out huge sums of money to make big fights happen there.