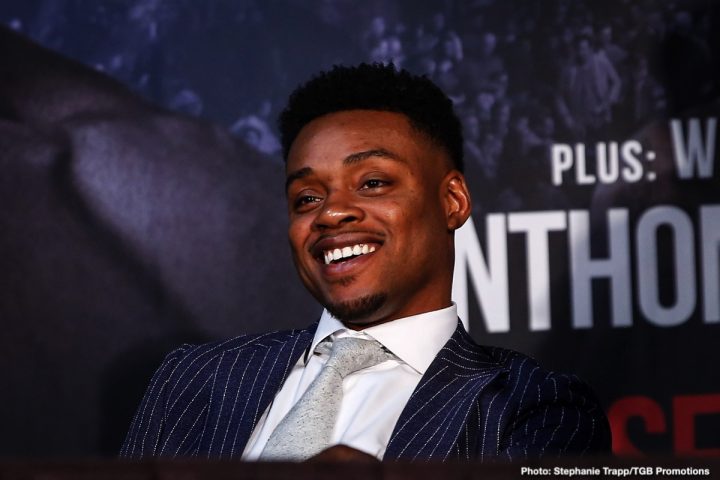 By Kenneth Friedman: Errol Spence Jr. has Manny Pacquiao on his target list for his next fight after he battles WBC welterweight champion Shawn Porter (30-2-1, 17 KOs) next month on September 28. Spence (25-0, 21 KOs) wants the honor of facing Pacquiao before he retires from the sport, and this may be his best shot at getting the fight.

Pacquiao (62-7-2, 39 KOs) doesn’t have an opponent yet for his next fight, and it’s not looking like Floyd Mayweather Jr. will return to the ring for a serious fight.

Errol ‘The Truth’ Spence and ‘Showtime’ Shawn Porter are headlining on September 28 on FOX Sports PBC Pay-Per-View at the Staples Center, in Los Angeles, California.

Spence, 29, had better be ready for a furious Porter on September 28th, because he’s sounding like he’s going to fight tooth & nail to try and win. It could be a tougher fight than Spence imagines. Pacquiao has already let Spence down once in agreeing to fight him, and then choosing to face Keith Thurman. At this point, boxing fans can only predict what Pacquiao will do based on his past actions when it comes to Spence. For that reason, it’s possible that the 40-year-old Pacquiao will choose not to fight Spence.

“It could happen. It could happen eventually,” said Spence when asked when he’ll fight WBO welterweight champion Terence Crawford. “We could fight in 2020.”

The Spence-Crawford fight will likely depend on what direction Pacquiao goes in. If Pacquiao fights Spence in 2019 or early 2020, then Crawford could get his shot at the winner of the fight. Aside from that, the boxing public could wind up having to wait until 2021 or 2022 before they see Crawford and Spence mixing it up. It’s not just up to Spence. He’s got his adviser Al Haymon helping him make the right career moves.