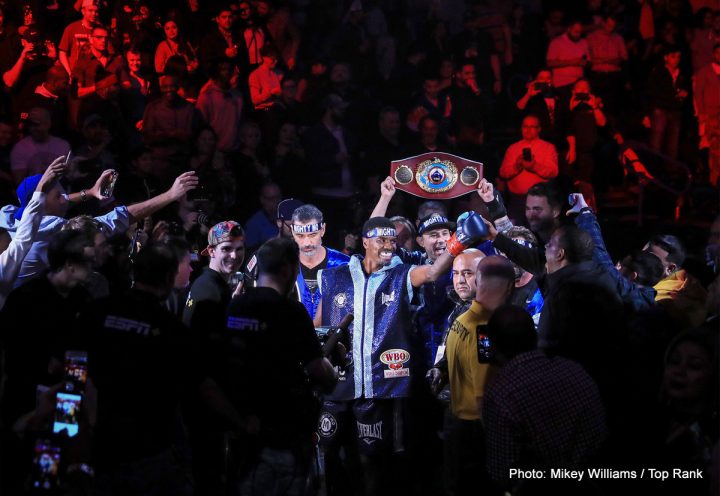 By Jeff Aranow: Eddie Hearn has several options for WBO light welterweight champion Maurice Hooker’s next title defense on DAZN, and they are as follows: Tommy Coyle, Chris Algieri and Jorge Linares. Aside from Linares, those aren’t exactly the greatest options for Hooker to fight, but they’re predictable ones.

Hearn will need to work his magic to get Algieri, Coyle or Linares ranked in the WBO’s top 15, given that none of them are currently ranked. Linares vs. Hooker would be a great fight. The other two not so great. Hearn would embarrass himself and Hooker if he were to choose Algieri or Coyle for his next fight.

If the idea is for Hearn to try and keep Hooker as the WBO light welterweight champion for as long as humanely possible, then matching him against Coyle or Algieri is the way to go. Hooker can probably milk his WBO title for the next five years without losing it if Hearn matches him against nothing but poor opposition. The WBO will of course force mandatory defenses on Hooker from time to time, but he’ll mostly be making voluntary defenses against guys that Hearn chooses.

Hooker (25-0-3, 17 KOs) was sensational last Friday in knocking out WBO mandatory challenger Alex Saucedo (28-1, 18 KOs) in the 7th round on ESPN at the Chesapeake Energy Arena, Oklahoma City, Oklahoma. Hooker went to war with Saucedo, 24, and beat him at his own game.

– Tommy Coyle (25-4, 12 KOs): This would be a fight that would resonate in the UK, as Coyle is from that area and his boxing fans would like to see him take on Hooker. We already saw Hooker win the vacant World Boxing Organization 140 lb title against British fighter Terry Flanagan last June. If Hooker faces Coyle in his next fight in early 2019, it would help increase his popularity in the UK. It wouldn’t do much for Hooker in terms of building his fan base where it counts in the United States, but that’s something his promoter Eddie Hearn is willing to risk. Coyle isn’t rated in the top 15 by any of the sanctioning bodies at 140. He’s basically little more than a domestic level fighter at best. In other words, Coyle isn’t a world class talent. He has notable losses to Luke Campbell, Gary Sykes, Derry Mathews and Tyrone Nurse. Each time Coyle has stepped up a level, he’s lost.

– Chris Algieri (21-3, 8 KOs): This wouldn’t be a good option for Hooker either, since Algieri hasn’t fought in two years and he’s not rated in the top 15 by any of the four sanctioning bodies. Algieri, 34, is scheduled to make a comeback this month against journeyman Angel Hernandez (14-11-2, 9 KOs) on November 30 in Huntington, New York. Algieri should win that fight, and that could lead to him being ranked in the top 15 by the World Boxing Organization. Hearn would have cover if Algieri is ranked in the top 15 at the time he selects him as Hooker’s next opponent, but it would still be a bad fight.

– Jorge Linares: this is an unlikely opponent for Hooker, 5’11”, to fight because Linares stands to gain more by fighting either the winner of the World Boxing Super Series 140 lb tournament than he does facing Hooker.