By Sean Jones: Teofimo Lopez was thoroughly unimpressed with what he saw from WBC lightweight champion Devin Haney with his shaky performance against Jorge Linares last Saturday night in Las Vegas, Nevada.

At this point, Haney’s promoter Eddie Hearn should be putting the brakes on his career, and steering him away from the elite-level lightweights like Teofimo, Gervonta ‘Tank’ Davis, and Vasily Lomachenko.

Those guys are all bad news for the 22-year-old Devin Haney. Even Ryan Garcia would be a huge threat to Haney due to his fragile chin.

IBF/WBA/WBC Franchise/WBO lightweight champion Teofimo (16-0, 12 KOs) wants to fight Haney next, so we’ll see if that match can take place or not.

“Was that a lightweight champion performance from Devin Haney? No,” Teofimo said to DAZN on Haney’s fight against Linares last Saturday. “He got booed by his own crowd, and in his hometown.

“They’re proud of what they did. You got clipped,” Teofimo continued. “The last two rounds, which are the championship rounds because it sets the tone of who wants it the most, and he didn’t really do that.”

Haney lost power, gassed out, and his chin betrayed him in the championship rounds against Linares. It’s fair to say that Haney was fortunate that Linares didn’t remember his training in how to deal with a fighter that goes into survival mode by holding.

A well-schooled fighter would have fought through the clinches and knocked Haney out.

“I think he should fight Teofimo,” said Matchroom Boxing promoter Eddie Hearn to Fighthub about Haney. “It’s a tough fight.

“We’ll see how Teofimo gets on in a couple of weeks [against George Kambosos Jr.] I would love to make that. I know he’s [Teofimo] quite vocal about making that fight happen.

“It’s a brilliant fight for the division. Ryan Garcia, Gervonta Davis, and there’s also a mandatory fight coming up between Jo Jo Diaz and Fortuna.

“I think it’s more likely that we can’t make the others. All the noise that I’m seeing from Teofimo Lopez is he wants the fight [with Haney].

“I think if Devin didn’t get buzzed tonight, maybe it would be harder to make those fights. But now, people are saying, ‘Oh, you know, he got hurt at the end of the 10th. Maybe we can stop him as well?’

“But you’re going to have to be very good to beat Devin Haney, very good, and he’s 22,” said Hearn. 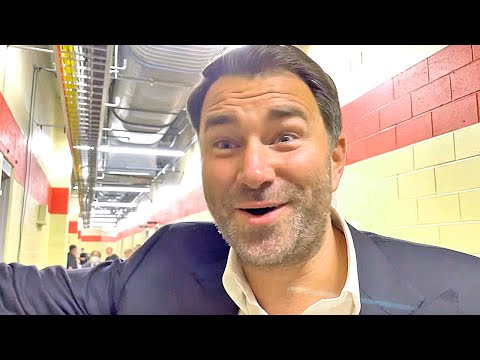 Canelo fires back at De La Hoya after being criticized »