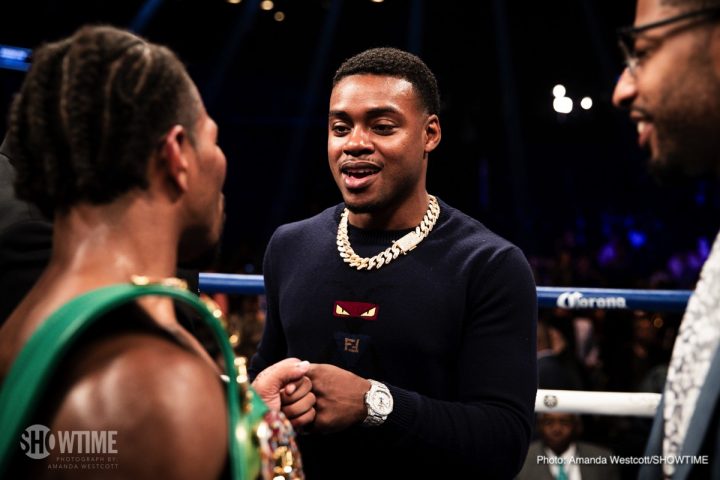 By Dan Ambrose: With his 12 round unanimous decision victory over Danny Garcia last Saturday night, Shawn Porter put himself in position last Saturday night for a unification fight against IBF welterweight champion Errol Spence Jr. in the first quarter of 2019.

Spence wants the fight with Porter to unify the 147 pound division. With both fighters signed with the same manager Al Haymon, there’s nothing to prevent them from facing each other. Porter, 30, will likely need to make a defense against his mandatory challenger in his next fight in 2018, but after that, his schedule is open for him to face the likes of Spence in a unification fight in early 2019.

Spence could be facing Mikey Garcia in late 2018. If not Garcia, then Spence could be making mandatory defense of his own against Yordenis Ugas, who earned the mandatory spot last Saturday night with a 12 round decision win over Cesar Miguel Barrionuevo.

“First quarter of 2019,” Spence said to Yahoo Sports News about wanting to fight Porter in 2019. ”The same way you called Danny [Garcia] out, I’m going to call you out. I think I’m the best welterweight in the division. I guarantee you I come home as the unified champion. I definitely want that fight against Porter,” Spence said.

Porter entered the ring after Garcia’s 9th round knockout win earlier this year over Brandon Rios on February 17 and called him out for a fight. Garcia had little choice but to except the fight with Porter, as the two of them were ranked #1 & #2 in the WBC’s rankings at 147, which meant those two were going to be the ones that squared off for Keith Thurman’s vacated WBC title. In the case of Porter, he doesn’t have to face Spence in a unification fight if he doesn’t to.

If Porter wants to milk his WBC title, he can do so and likely hold onto it for a long time. Arguably the best contender in the WBC’s current top 15 rankings is Jessie Vargas, who Porter would likely have little problems beating, Amir Khan is rated #10 with the WBC, but his performance last Saturday night in beating Samuel Vargas showed that he wouldn’t likely do well against Shawn. Porter doesn’t want to duck the Spence fight. He wants to face him rather than dodging the contest in order to milk his newly won WBC title.

The 5’9” Spence’s size and power will make it a nightmare for Porter to try and deal with him. Spence is capable of going to war or boxing to make it tough on Porter. If Porter does try and brawl with Spence like he did against Garcia, then this fight could be over with quickly with Errol winning. Porter’s only chance of beating Spence is to try and out-box him the way that Kell Brook was doing in the first five rounds of their fight last year in May. Spence came on and wore Brook down with power shots in the second half of the contest until he quit on one knee in the 11th round. We might see the same thing with Spence-Porter.

One thing that could delay a Spence-Porter fight is if Keith Thurman emerges from his slumber to face Porter in a rematch. There’ a lot of interest from the boxing world in a rematch between Porter and Thurman. Porter lost to Thurman by a close 12 round decision in 2016, and he’s been after ‘One Time’ ever since to give him a rematch. Unfortunately for Porter, Thurman has been sitting on the shelf with an elbow injury since his victory over Danny Garcia last year. Thurman is supposed to be returning to the ring in late 2018, but it’s unclear whether he will. It’s now September and Thurman still doesn’t have a fight scheduled, which isn’t a good sign.

“If the fight doesn’t happen, it won’t be because of Errol or me,” Porter said to Yahoo Sports News.

Haymon can make the Spence vs. Porter fight. The winner of that match would increase their popularity with the boxing world. The loser could come out of the fight more popular as well as long as they put in a good performance. Garcia’s popularity wasn’t hurt with the effort he put in against Porter. It was a very good performance by Garcia, who lost for only the second time in his career.

The judges scored the Porter vs. Garcia fight 116-112, 115-113 and 115-113 for Shawn. It was a close fight, but Porter took over in the second half of the contest and appeared to win rounds 6, 7, 8, 10, 11 and 12. Garcia got the better of the action in the first six rounds, but he wasn’t able to do enough in the second part of the fight to cement the victory in the eyes of the judges. Garcia was spending too much time holding Porter to keep him from getting his shots off. Garcia needed to let his hands go more down the stretch, but he unable to pull the trigger with his shots. Porter’s high work froze Garcia, who was waiting too long to land the perfect counter shots instead of letting his hands go enough to stay in the fight.

Garcia wasn’t willing to admit that he had lost the fight to Porter afterwards. This was the same thing that Garcia failed to do after he lost to Keith Thurman last year. Garcia and his father/trainer Angel Garcia maintained that they had done enough to deserve the victory over Thurman, but the judges saw it as a victory for ‘One Time.’ Unfortunately, he came across as a poor loser to some boxing fans.

”I thought I landed the clearer shots and won the fight,” Garcia said. ”He was throwing a lot. I had my defense tight, so I wasn’t feeling his punches.”

Porter wasn’t landing with the same kind of power as Garcia, but he was landing with a greater frequency and showing the judges that he wanted it more. Garcia could have won the fight if he’d been busier and showed more of a sense of urgency. Porter’s trainer Kenny Porter told him to turn up the heat on the tiring Garcia in the second half of the fight, and he followed his instructions well turning up the heat and taking over. In each of the last six rounds, Porter attacked Garcia in a relentless manner in throwing lots of punches in a machinegun manner. Garcia continued to throw one punch at a time, and he was doing a lot of holding to try and slow Porter down. It looked like Garcia was spoiling instead of trying to match Porter.

Garcia landed the cleaner, harder shots, but Porter’s determination down the stretch was the deciding factor in the fight. He was the aggressor and the judges liked that style.

Ugas, 32, could be the next up for Spence unless Haymon is able to make the Mikey Garcia-Spence fight for December, which would seem unlikely.

”I want the winner of Danny Garcia vs. Shawn Porter. I’m here to compete with the top level guys in the sport,” Ugas said.

Spence vs. Ugas will be a fun fight for boxing fans to see, as both of them are hard body punchers with Olympic experience.