Arum comments on Mayweather coming back to face Pacquiao 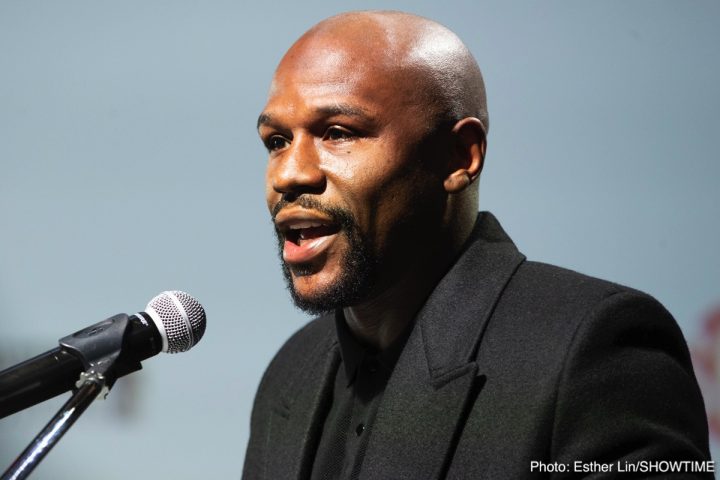 By Allan Fox: Top Rank promoter Bob Arum says he wishes Floyd Mayweather Jr. and Manny Pacquiao luck in selling their rematch that could take place later this year. However, Arum wants no part of the promotion, as he says he only wants to promote younger fighters in their prime, and he feels that Mayweather and Pacquiao are well past their prime.

Mayweather is 41-years-old and Pacquiao will be turning 40-years-old in December. They’re basically old timers in the sport, and it’ll be tough to sell a fight between them at this stage. But as the old saying goes, ‘There’s a sucker born every minute.’ There might be enough fans that are gluttons for punishment to make Mayweather and Pacquiao a huge payday in a rematch.

Mayweather posted the news of him returning to the ring in December on social media on Saturday after meeting with the Filipino star in Tokyo, Japan.

“Good luck to them,” Bob Arum said to Fighthype when asked what his thoughts are about the news about Mayweather facing Pacquiao in December. ”Sure, it’s a possibility. It’s probably a way for each of them to make some good money, but I don’t want any involvement in it because I have an obligation to put on fights with good young fighters in their prime, and Mayweather and Pacquiao are hardly in their prime,” Arum said.

If even a small portion of boxing fans order the Mayweather-Pacquiao 2 fight on PPV, they’ll still make loads of money each. Their fight in 2015 sold 4.6 million PPV buys on HBO/Showtime. If the fight does half of those numbers in bringing in over 2 million buys, it would be a huge success for both of them. Mayweather doesn’t appear to have any interest in fighting any of the prime welterweights like Terence Crawford, Errol Spence Jr. or Shawn Porter. Mayweather’s idea of fighting Pacquiao and getting a nine figure payday out of it might be a pipe dream.

What worked for Mayweather in 2015 in selling a fight that was already six years overdue likely won’t work now three years later. The boxing fans already saw the two of them fight each other in a horrible fight. It was an easy win for Mayweather in defeating Pacquiao by a 12 round unanimous decision. With Mayweather and Pacquiao having done little to keep their popularity up to show the fans that they’re still top fighters, it’s going to be hard to sell a rematch. Mayweather already beat Pacquiao soundly in 2015. There’s no demand for a rematch from boxing fans. In fact, the fans aren’t demanding Mayweather fight anyone. He’s been forgotten. His last three fights have been so bad that it’s unlikely that anyone will want to pay to see him fight ever again unless it’s against someone like the winner of the Gennady Golovkin vs. Saul Canelo Alvarez match. The boxing public would pay to see Mayweather fight those guys, but he obviously knows his limitations and isn’t going to risk getting badly knocked out.

Ideally, it would be nice if Mayweather came back to fight one of the top fighters in the welterweight division before facing Pacquiao, as it’s been two years since he fought a top fighter in in boxing. Mayweather fought last year in beating UFC star Conor McGregor in the boxing ring, but that was a farce. McGregor had never boxed before in a professional fight, and he never had a chance. Mayweather toyed with the MMA fighter for nine rounds until stopping him in round 10. It was a mismatch.