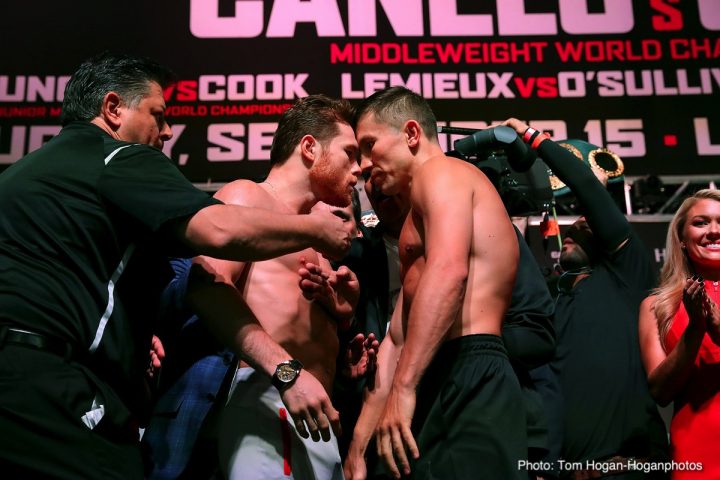 By Jeff Aranow: Saul Canelo Alvarez’s year of inactivity and subsequent dramatic weight loss has ESPN commentator Teddy Atlas thinking that he might be bludgeoned into submission by Gennady Golovkin in the first four rounds tonight in their rematch on HBO PPV at the T-Mobile Arena in Las Vegas, Nevada. Atlas predicts that the first four rounds could be tough for Canelo, because of his decision to lose a lot of muscle. Atlas thinks Canelo’s weight loss is going to put Canelo in a position where he’s going to be susceptible to Golovkin’s size and power.

When Canelo came face to face with Golovkin at Friday’s weigh-in, he looked not only a lot shorter than him at 5’8” compared to his 5’10 ½”, he also looked weaker and not the pumped up guy he was in their first fight. Although Canelo’s physique looked roughly the same in terms of size, his muscles weren’t as rock-like as they were last September. Canelo looked a lot stronger back then than he is now. Golovkin clearly looked like the much stronger fighter of the two this time.

Atlas says Canelo might not be the same fighter because he’ thinks not using clenbuterol this time. He says Canelo will have trained harder to make up for what he’s not putting in his body this time to get an edge against GGG. Atlas seems to suspect that Canelo was using performance enhancing drugs the last time he fought GGG, but he doesn’t believe it’s going to hurt him in this fight.

”In the early rounds if there’s going to be a knockout, it’s going to be Golovkin getting on Canelo,” Atlas said on ESPN’s First Take. ”When Canelo gets out of the Shute a little slow because of the year of inactivity, and being a smaller guy, maybe before he gets into the fight, he doesn’t absorb well early on. That would be the danger point for me. He’s ready [to go 12 rounds],” Atlas said about Canelo. ”Early on, I expect him [Golovkin] to come out first. The early rounds are going to be the dangerous rounds, the hard rounds for Canelo,” Atlas said.

It’s not just going to be Golovkin that starts quickly. Canelo looked as nervous as a cat at Friday’s weigh-in. Canelo might start out quickly against Golovkin to try and show his detractors that he’s not the scared runner that they think he is. The criticism from the boxing fans likely bothers Canelo a great deal. Canelo is smart enough to know that if he doesn’t give Golovkin something to think about in the first four rounds, he’s not going to be around to see the later rounds of the fight.

Canelo needs to meet fire with fire to make Golovkin second guess himself. If Golovkin is getting no resistance from his opponent, he’s going to tee off on Canelo in the same way he did against Kell Brook, and the fight won’t last into the second half. Brook made it to the 5th because he was running from GGG. If Canelo doesn’t use some kind of movement in the first quarter of the fight, then he’s going to get taken out quickly, because he’s looking smaller than Brook right now.

It’s going to be awfully tough for Canelo if Golovkin goes after him in the first quarter of the fight full bore. If Canelo doesn’t run from Golovkin and play it safe like he did last time he fought him, it could end in the four rounds.

“I thought early on in the fight when he got Canelo trapped along he ropes, he didn’t go for the finish,” Atlas said. ”He had him trapped, but he let him off the hook. Now he’s got to make a decision and look at the film and say, ‘Hey, I could have done more,’ or does he say, ‘You know what? I was feeling a little older in training. I’m 36, I got to pace myself a little bit.’ Those are the intangibles. Those are the things that are floating around,” Atlas said.

Atlas says Golovkin has a history of over-training for his fights, and he thinks he could have gone overboard in preparing for Alvarez. Atlas thinks that Golovkin’s over-training won’t show itself until after the first four rounds tonight. He’s not sure that Canelo will last that long into the fight to where GGG’s over-training starts to be a problem for him. Canelo looks smaller, and he’s not sure whether his thinner body will hold up to the early pounding from the bigger, stronger Golovkin.

You must admit that Golovkin looked over-training for his fight with Daniel Jacobs last year. Golovkin was weary during the weigh-in and during the fight. He’d been sparring with super middleweight David Benavidez during camp, and that’s a big, young 21-year-old guy with tons of power. Golovkin’s trainer Abel Sanchez did him no favors in having him train a fighter the size of Benavidez. As far as I can tell, that was the only time in GGG’s career in which he appeared to be over-training. Golovkin wasn’t over-trained for his fight with Canelo last year. GGG’s ineffectiveness in that fight was more of a case of bad game plan, and a lack adapting to what Canelo was doing, which was him moving to his left to reduce the pressure that was being put on him.

“Both guys are lighter. You know what? I’m going to throw something out there. They both look great. They were up, they had six pack, eight-packs, 12-packs, 24-packs, and they had it all going. Golovkin and his trainer [Abel Sanchez] have a history of overtraining,” Atlas said to ESPN’s First Take. “So, sometimes looks can be deceiving. He looked great. But maybe he left something in the gym. He’s lighter. Golovkin might have over trained. He’s lighter. He’s had a history of over training with his trainer Sanchez, of leaving something in the gym too much. It means he’ll be the bigger guy with the power. It means maybe you’re not. We’re going to find out when they get in the ring. He usually comes in 160. They both came in 160,” Atlas said.

At Friday’s weigh-in, Golovkin looked in the best shape he’s been since his fight with Daniel Geale in 2014. Up to that point in Golovkin’s career, he’d always been in incredible shape for his fights with almost no fat on him. After that fight, Golovkin looked like he was carrying around extra weight on his midsection. I didn’t stop Golovkin from destroying his over-matched opponents Marco Antonio Rubio, Martin Murray, Willie Monroe Jr., David Lemieux and Dominic Wade. In Golovkin’s fight with Kell Brook, he looked bad in struggling with his movement, power, defense and overall boxing skills. Golovkin ended up winning that fight based on his punching power and natural size advantage that eventually was too much for Brook. The British fighter suffered an eye injury early on in the fight, and he decided he’d had enough by the 5th round. I think Golovkin would have stopped Brook by the 7th round even if he didn’t suffer an eye injury. With the way that Golovkin was attacking Brook, he was going to going to get him out of there because he was putting unrelenting pressure on him. The British fighter couldn’t handle the pressure. Brook was wilting in the same way that Canelo was wilting in the 12th round.

”Sometimes when you get older, you peak a little bit. You’re like an old car,” Atlas said in comparing Golovkin to an old car. He might have worked too hard in the gym. 36-year-old guys shouldn’t work as hard as 28-year-old guys. Golovkin will have the edge early, but as the fight goes on, the younger guys will have more petrol in the gas tank,” Atlas said.

If Canelo is able to take Golovkin’s power for the full 12 rounds and keep up with him in the fast pace he sets in the fight, then it’ll be interesting to see how this fight plays out in the later rounds. I just don’t know that Canelo will still be hanging around by that point in the fight, because GGG is going to be attacking him at a faster pace this time than he did last time, and he’ll be throwing a lot of body shots. Canelo won’t be able to get out of the way of GGG’s body shots like he was able to do when he was throwing to the head. Canelo will likely be trying to move to keep from getting hit to the body. If Golovkin is able to stay up with Canelo and not let him escape, then he’s going to get hit a lot with the best shots from GGG. Can Canelo take Golovkin’s best power shots to the body and hold up for 12 rounds? That’s the magic question that we’re going to find out tonight. Canelo wasn’t impressed with Golovkin’s power last time, but he was moving a lot to avoid getting hit. Canelo didn’t stand stationary long enough to get hit all that often. Golovkin was jabbing on the outside and not coming after Canelo the way he likely will be doing tonight. This fight is going to be a different fight altogether.

I don’t know if what Atlas says is correct about Canelo having more in his gas tank than Golovkin in the later rounds. Canelo looked gassed from rounds 3 to 10. Even when Canelo started to come forward a little in rounds 10, 11 and 12, it was Golovkin that finished the rounds strong in coming on after Alvarez would show some spurts of activity in the first minute of those rounds. It was difficult to give Canelo any of the last three rounds because Golovkin was dominating the last two minutes of those rounds. Canelo looked exhausted after the first minute. That obviously goes against what Atlas is saying in his opinion that the younger guy Canelo will have more gas in his gas tank than Golovkin.

“You do it because you don’t have your army this time,” Atlas said about his opinion that Canelo isn’t using clenbuterol this time. “Let’s get to the point, steroids. You don’t have it this time. You work harder. You want to make up for what you don’t have. I expect the age factor to kick in [for Golovkin]. I thought Golovkin at 35 was sliding already. Now he’s 36, a year older. Everybody talks about a year of inactivity for Canelo. No doubt about it. That means he might get off to a slow start. There might be ring rust, but later on, it’s really going to be the negative for the older guy Golovkin. He’s a year older and he was sliding before. I think he’s still sliding. When you’re 36 with those amount of miles on the odometer, you start to possibly look old,” Atlas said.

Since all we can go by is what happened in the previous fight, it’s doubtful that Canelo will be the stronger fighter down the stretch. He’s simply never shown the ability to do that in his career. Canelo mostly knocks guys out. In the fights where Canelo has had to hang around until the 12th rounds in his fights against Floyd Mayweather, Austin Trout, Golovkin, Erislandy Lara, Shane Mosley, Miguel Cotto and Ryan Rhodes, he was exhausted and didn’t look like he had more in the gas tank than his opponents. The only fight where Canelo had more in his gas tank late in his fight was against Julio Cesar Chavez Jr. in 2017, but that was a case of him fighting a guy that was totally weight drained and not in good shape. Chavez Jr. had reportedly started training camp at 235 pounds, and he’d had to drain down to the 164.5 pound catch-weight for the fight.