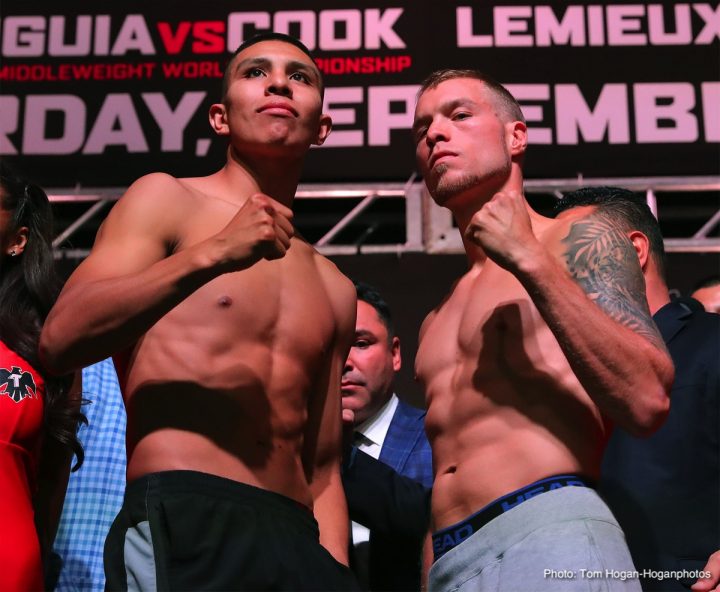 By Dan Ambrose: World Boxing Organization junior middleweight champion Jaime Munguia (31-0, 26 KOs) stayed unbeaten in stopping challenger Brandon Cook (20-2, 13 KOs) in the 3rd round in what turned out to be a showcase fight at the T-Mobile Arena in Las Vegas, Nevada.

The much bigger 6’0” Munguia dropped the 5’8’ Cook twice in round three. The referee Tony Weeks was then forced to stop the fight.

Munguia hurt Cook in the final moments of round 1 with a huge shot. It looked like Munguia could have gotten Cook out right away, but it appeared that he was focusing on his boxing skills to improve from his previous fight. In round two, Munguia was teeing off on Cook with heavy shots to the head and body. Cook showed a good chin and a lot of heart in taking the punishing blows without going down, but it was clear that he wasn’t going to be able to last too much longer with the way that he was getting hammered.

Cook didn’t belong inside the ring with Munguia. The Canadian fighter was too small, too weak and too slow for a fighter with Munguia’s size and power.

The size difference between the two fighters was shocking. It’s unclear how Munguia is still able to make weigh for his fights because he put on a tremendous amount of water weight after making weight. Munguia looked huge after rehydrating to 175 pounds overnight after Friday’s weigh-in. The 21-year-old Munguia looked like a super middleweight inside the ring with the junior middleweight Cook.

The size advantage for Munguia was just too much for the 32-year-old Cook to deal with. Munguia will do well as long as he can make weigh without being weight drained, but sooner or later he’s going to have problems making the 154 pound weight class without being weakened from the process. At this point, Munguia is still young enough to where he can fight in a weight class that doesn’t support his body size. At 175, Munguia’s weight will likely be more than IBO/WBA/WBC middleweight champion Gennady Golovkin’s rehydrated weight tonight for his rematch against Saul Canelo Alvarez.

It’s unclear who Munguia will face next. He says he’d be open to facing World Boxing Council junior middleweight champion Jermell Charlo or IBF/WBA champion Jarrett Hurd in a unification fight in 2019, but he’s leaving it up to his management. Munguia is co-promoted by Golden Boy Promotions. Given that they had Canelo wait three years before they finally gave him the green light to fight Golovkin, it’s likely that they won’t let Munguia fight Hurd or Charlo for several years. Munguia would have a lot of issues with Hurd and Charlo if he fought them right now, and he’s not ready for those guys yet if ever.