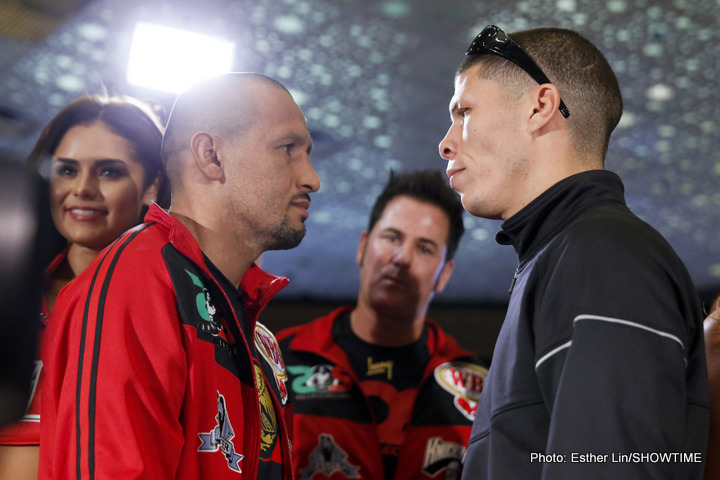 Martinez knocked Salido down in the 3rd and 5th rounds. Salido also had a point deducted for throwing a low blow in the 11th. Without the knockdowns and the point deduction, Martinez would have clearly lost the fight. He definitely struggled in many of the rounds from the pressure from Salido, but the knockdowns saved his hide.

“Everyone saw that the first fight against Salido was a true war. This time around, I’m planning to give my fans the same type of fight,” Martinez said, via ESPN.com’s Dan Rafael. “I predict a nonstop action slugfest.”

It’s definitely in Martinez’s best interest to try and turn the fight into a war from the 1st round on, because if he can get another knockdown or two in the first six rounds of the contest, it might be enough for him to cruise the rest of the way.

Salido is a slow starter, and that’s when Martinez has the chance to drop him and build a commanding lead that puts him well behind. Salido is good at rallying from behind, but not when he’s as far behind as he was against Martinez last April. That was simply too far behind for him to be able to come back from.

Salido needs to be cautious in the first five rounds of the contest by keeping his chin tucked, and not taking too many chances. Martinez will be looking to take advantage of every mistake Salido makes in this fight. Martinez is definitely not unbeatable, as we saw in his losses to Mikey Garcia and Ricky Burns in the past.

Martinez looked very flawed in those fights. He had both of them down early in the fights, but once they got up off the canvas, they were able to dominate the action to get the victories. Salido just needs to make certain that he doesn’t get knocked down in the first six rounds because the last thing he needs to do is give Martinez a big lead the second time around.

“I am very happy we are fighting in a neutral territory for our rematch, not in Puerto Rico again,” Salido said. “I was very prepared for the first fight but the referee wouldn’t let me fight my fight. It seemed the referee was talking to me the whole 12 rounds. I was trying to focus only on my opponent, but I couldn’t.”

A loss here for Salido would be his third defeat in his last six fights, and it would be a sure fire sign that he might need to hang up his gloves. Salido can’t afford another loss at this point.

« Pacquiao’s shoulder to be evaluated

Trainer: Tyson Fury will be ready for what Klitschko brings »