Trainer: Tyson Fury will be ready for what Klitschko brings 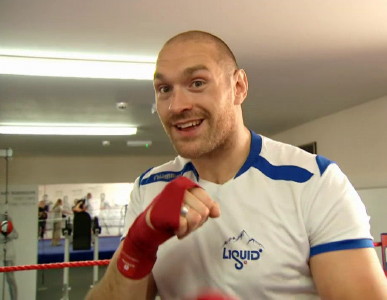 By Scott Gilfoid: Trainer Peter Fury says his fighter Tyson Fury (24-0, 18 KOs) will absolutely be ready for whatever IBF/IBO/WBA/WBO heavyweight champion Wladimir Klitschko (64-3, 53 KOs) brings to the ring on October 24th in their fight at the ESPRIT Arena in Dusseldorf, Germany.

Fury has obviously been training with guys of similar height as the 6’6” Klitschko, and working at trying to defeat his distinct fighting style. However, it has to have been extremely difficult for Peter to find someone that can properly mimic the way that Klitschko fights, because there aren’t too many big heavyweights in the division that has his jab, left hook and right hand combination.

I’m sure Peter had little problems finding some big sloppy heavyweights that are trying their best to ape Klitschko, but let’s be real about this; Fury isn’t going to get anything from his sparring that will actually help him in the ring on October 24th.

If anything, Fury is merely developing bad habits from fighting sloppy heavyweights, and this in turn will likely carry over to the fight when the gets inside t ring with the real thing Wladimir on October 24th.

In answer to all questions re @Tyson_Fury he will be ready for what klitchko brings. Will show the world what fighting blood line means.

I hate to disagree with Peter Fury, but I don’t think Fury is going to be ready for what Klitschko will be bringing to the ring in this fight in terms of his punching power. Heck, even if Fury does come into the fight completely ready for whatever Wladimir brings, he’s going to be in big trouble once he gets nailed cleanly by the first left hook Wladimir throws in the fight. I mean, if Fury isn’t on his backside like he was in his fight against the light hitting Steve Cunningham, then he’ll be staggering around the ring wondering what hit him. Wladimir will then likely poleaxe him with a perfectly measured right hand to the head.

That’s why I don’t think it matters how well-prepared Fury is for this fight. It won’t matter because once he gets tagged by one of Wladimir’s big power shots, Fury will be on the canvas staring up at the lights.

I don’t want to knock Peter for his training ability, but I don’t think he’s going to come up with any kind of a sound game plan that will help Fury win this fight. If I were Fury, I would have dumped Peter ages ago and gone across the pond to find a good trainer like Freddie Roach, Virgil Hunter or Johnathon Banks.

Fury is up the creek without a paddle in going into the Klitschko fight without the training team that he needs to be competitive in this fight.

About the best that Fury can do in this fight would be to try and beat Klitschko at his own game by using a lot of clinches to keep him from getting his shots off. If Klitschko is abvle to unload his big power shots in this fight, he’s going to have Fury on the canvas looking like a big fish out of water in flapping around.