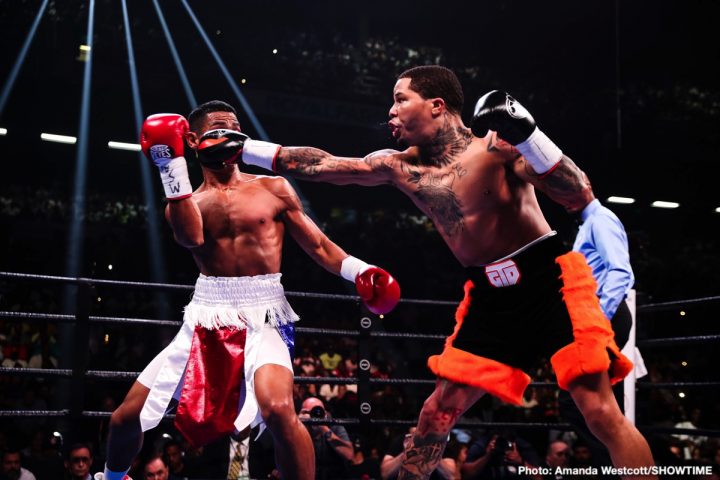 Billed as the ‘homecoming,’ Davis, 24, hurt Nunez in the second round with a big shot to the head. Davis continued unload on Nunez until the referee Harvey Dock was forced to step in and stop the contest. Nunez was against the ropes being shelled to pieces by the hard hitting Gervonta.

Nunez had not chance once he was hurt

A lot of Davis’ punches were missing, but he was still hitting Nunez with massive punches. Davis showed no signs of let up with his steady flow of blistering head shots. If Nunez had given an indication that he could fight his way off the ropes, the referee would have let the fight continue. That wasn’t going to happen. Nunez was a punching bag for Gervonta.

Although it looked like a premature stoppage, it was clear that Nunez wasn’t going to weather the storm from Davis. Nunez was getting hit with too many hard power shots from Gervonta, and the referee had no option but to stop it. The official time of the stoppage was at 1:33 of round two.

Former featherweight champion Yuriorkis Gamboa (30-2, 18 KOs) completely obliterated former WBO 130 pound champion Roman ‘Rocky’ Martinez (30-4-3, 18 KOs) in stopping him in the second round on Saturday night in a fight at lightweight at the Royal Farms Arena, in Baltimore, Maryland.

Gamboa, 37, dropped the ring rusty former WBO super featherweight champion Martinez twice in the second round.  The fight was then halted by referee Bill Clancy. The official time of the stoppage was at 2:00 of round two.

Martinez made mistake of trying to slug with Gamboa

Martinez, 36, made a mistake of coming out looking to score a quick knockout against the hard-hitting 2004 Cuban Olympic gold medalist Gamboa. That was a mistake on Martinez’s part, because had too much speed and power for him to handle. Gamboa caught Martinez with a huge shot to put him down. Moments later, Gamboa knocked Martinez down for a second time. This time the fight was halted.

The fight was only the second for Martinez in the last three years since his fifth round knockout loss to Vasiliy Lomachenko in May 2016. In hindsight, Martinez should have boxed Gamboa instead of coming out fast looking for an early knockout. Martinez has taken a lot of punishment during his 18-year pro career in his fights with Orlando Salido, Mikey Garcia, Ricky Burns and Lomachenko.

With this win, Gamboa could be facing Gervonta ‘Tank’ Davis in the fall. There’s talk that Gamboa will be the next opponent for Gervonta, if he wins his fight tonight against Ricardo Nunez.

Light welterweight Kareem Martin (13-2-1, 4 KOs) defeated an over-matched Luis Avila (8-14-3, 5 KOs) by a third round stoppage. Avila didn’t answer the bell for the fourth round.