Pacquiao’s shoulder to be evaluated 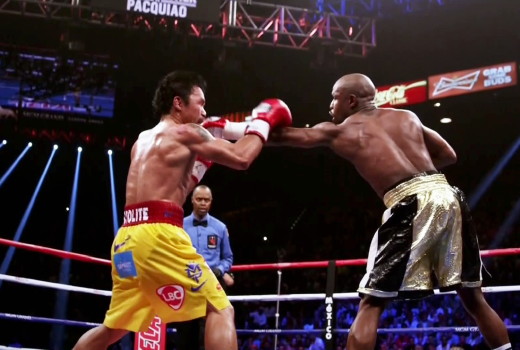 By Tim Fletcher: Manny Pacquiao will be having an MRI performed on his shoulder to check the status of the healing from his surgery four months ago on September 7th. According to the New Standard/Boxing Mirror.com.

The results of the MRI will be evaluated by Pacquiao’s surgeon Dr. Neal ElAttrache for him to determine whether it’s feasible for the 36-year-old Pacquiao to return to the ring in February or March of 2016. That’s when Pacquiao’s promoter Bob Arum is looking to have him back inside the ring fighting against an opponent still to be determined.

As for who Pacquiao will be fighting, Amir Khan and IBF welterweight champion Kell Brook are both possibilities. However, Pacquiao’s adviser Michael Koncz thinks that Khan holds too much.

[Khan] “doesn’t have a punch but he grabs and he holds so much so I don’t like it very much,” Koncz said to the New Standard/Boxing Mirror.com.

It’s unknown if Koncz has any real say so about who Pacquiao fights. That’s largely determined by Arum. If he wants the Khan fight for Pacquiao then that’s what’s going to happen. But it will also depend on Khan’s adviser Al Haymon. He doesn’t often work with Arum to put together fights between their guys, and it would be kind of surprising to see the two of them work together for this fight.

It’ll be up to Arum, but I wouldn’t bet on seeing Khan and Pacquiao together though. I don’t think Arum will make that move. Even a fight between Pacquiao and Brook is one that might not be doable. Brook is with Haymon as well, so it’s probably not realistic that he’ll get a fight against Pacquiao.

Koncz doubts that a fight between Pacquiao and Danny Garcia can be made. Garcia is with Haymon as well, so that would seem to be reason enough for that fight not to get made.
When you remove Brook, Garcia and Khan from the equation for Pacquiao’s next fight in February or March, it leaves WBO light welterweight champion Terence Crawford as the leading candidate to get the fight against him.

Crawford is unbeaten, he’s with Top Rank, and he’s a fighter who Arum has already mentioned as being interested in matching against Pacquiao. There’s really no one else for Arum to match Pacquiao against since he likely won’t be able to put him in with any of Haymon’s fighters. It’s still too early for Pacquiao to be matched against Tim Bradley and Brandon Rios once again.

Floyd Mayweather Jr. remains an option for Pacquiao to fight next year if Mayweather chooses to continue fighting. But a rematch between the two fighters would seem to be unlikely for Pacquiao’s first fight back from the shoulder injury. Pacquiao will likely face Crawford next and then maybe a fight against Mayweather if the American fighter is still interested in facing him a second time.

Arum obviously will have his fingers and toes crossed when it comes to Pacquiao’s MRI results being evaluated by Dr. Neal ElAttrache. Arum needs Pacquiao to be given the green light to return to the ring in early 2016. The worst news he could get is there’s complications that will require additional surgery or more time with rehab.

« Joshua not looking past Cornish