A final gamble on Yuriorkis Gamboa 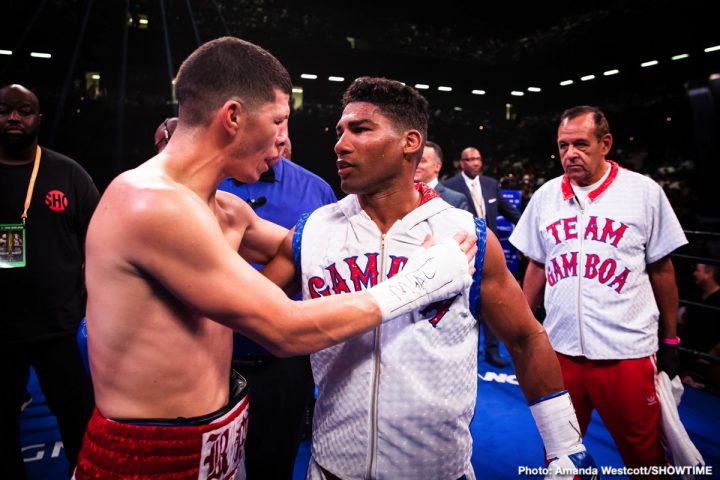 By Gav Duthie: This weekend Gervonta ‘Tank’ Davis did what he always does, demolished his opponent Roman ‘Rocky’ Martinez with ease. On the undercard, Yuriorkis Gamboa did what he used to do years ago in demolishing an opponent with ease. Gamboa called out the potential superstar Gevonta ‘Tank’ Davis straight after the fight. Its a risk, Gamboa is dangerous and used to be one of the best fighters on the planet.

Now this is no longer the case but his career deserves this fight. This article looks at the misfortune of 3 weight world champion Gamboa’s 30-2 (18) career and any chance he has to beat the relentless Davis. It must be on Floyd Mayweather’s mind to put the two together.

The rundown of Saturday

Gervonta Davis and Yuriorkis Gamboa fought on the same card but against different opponents. Davis destroyed his mandatory challenger Ricardo Nunes in 2 rounds. He looks the part but at this stage the only top level fight he has really had was when he won the title the first time round defeating Jose Pedraza. A potentially tough outing against Abner Mares was derailed after a Mares injury so Gamboa would be a good option at this point.

Gamboa fought former two weight world champion Roman ‘Rocky’ Martinez in a fight that would have been quite big back in 2010 or 2011. Nevertheless the way he dispatched of Martinez was impressive with a lead left hook for the first knockdown and a straight right to finish the show. Promoters must have been considering a fight between the two by putting this contest on the undercard. They couldn’t have asked for a better message than consecutive second round knockouts.

On current form I wouldn’t necessarily say he deserves to fight Davis but his career definitely deserves it. Back in 2012 Gamboa was a hot ticket. Don’t get me wrong he has had a great career but not the career defining fight nor the money he deserves. Even Floyd Mayweather said that after himself Gamboa was the best fighter in the world during his best period. Over a two period in 2010/11 he took the undefeated record of Jonathon Victor Barros, dominated Orlando Salido and Daniel Ponce De Leon as well as stopping Jorge Solis.

At this point seeing himself as an important fighter he bought himself out of his contract with Top Rank and was set to sign for a new company headed up by Floyd Mayweather and Curtis ’50 Cent’ Jackson. It was a bad move. Mayweather never invested in the end and ’50 Cent’ was inexperienced in the fight game.

Gamboa in his prime became inactive. When he did get that career defining fight it was against Terence Crawford at lightweight who was huge in comparison. Gamboa gave a great account of himself but was ultimately stopped by the current world pound-for-pound number 1. He then only fought once in 2015 and didn’t fight the entirety of 2016. This promotional venture was turning into a disaster. By the time he got out of the deal he was no longer the same. He lost to high class journeyman Robinson Castellanos in 2017 and his career seemed to be over. He has won four fights since then including Roman Martinez on Saturday and a controversial points win over Jason Sosa. This form deserves to put him in the mix to fight Davis or Tevin Farmer.

What does Gamboa have left

I would love to see Davis fight a 2011 version of Gamboa but sadly we won’t see that. He is not the same but still dangerous. He is still fast in single punches but not so much in combinations. His feet are also not as fast which was possibly his best attribute. He was similar to Vasiliy Lomachenko or Guillermo Rigondeaux in his younger days on how he could get in, throw his punches and get out quickly. The ferocity of Gervonta Davis will be a problem and I doubt Gamboa can keep him away with his jab. Its not easy to knock out a Cuban fighter though so he should provide a bigger test for Davis than one might think.

Hughie Fury vs. Alexander Povetkin in the works for Aug.31 on Lomachenko-Campbell card »